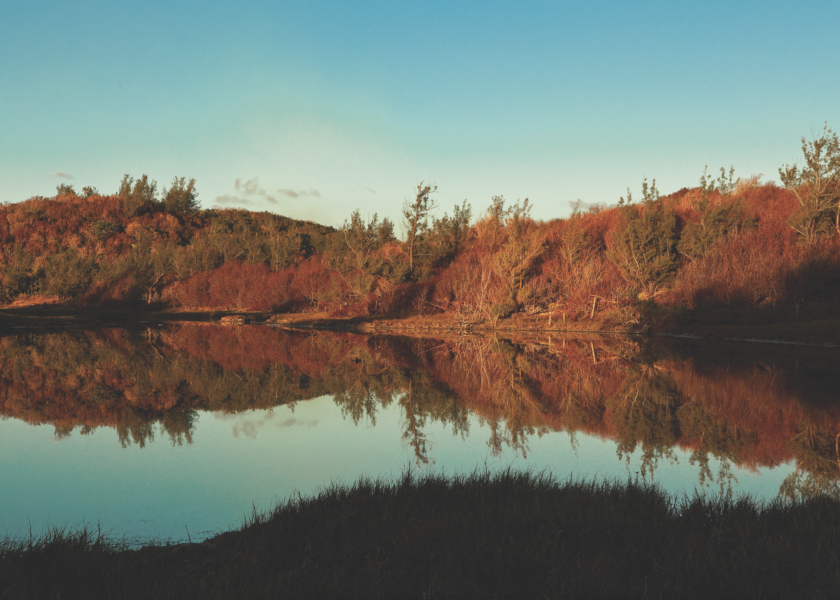 In general, Bermudians don’t pay much attention to ponds. For many years they were believed to be wholly unimportant ecosystems, and in the early days of the island many of them were used as trash dumps, or filled in. Now, however, the importance of ponds has become clear to us, as an important area for many native and endemic species. Here we explore four important ponds in Bermuda and what you should hope to see at each.

Warwick Pond: Killifish
Though many people keep away from ponds, in the summer Warwick Pond, owned by the Bermuda National Trust, brings the pond to you. In the heat it kicks up a veritable pong, which is caused by a combination of factors. Anaerobic bacteria present in ponds produce hydrogen sulfide gas when they respire, which presents itself to us as a rotten egg smell. In addition, many of Bermuda’s ponds are vulnerable to groundwater polluted with sewage because they do not have much water flow.

Its important to work towards preventing the pond from becoming further polluted because it is Bermuda’s largest freshwater pond. It supports the only freshwater adapted population of our endemic killifish on island.

During the 19th century, killifish were widespread throughout Bermuda’s wetlands, but their numbers have dropped drastically in recent years due to habitat destruction and pollution. Killifish are interesting, adaptable fish, and their populations and genetic makeup vary slightly depending on which pond they are found in. Individuals from Warwick Pond are currently being kept and bred at Vienna Zoological Gardens in order to be released back into Bermuda’s ponds when the habitat is more suitable.

Mangrove Lake, Trott’s Pond, South Pond: Diamondback Terrapin
These three ponds are vital nature reserves for the native and threatened Diamondback Terrapin. They are heavily dependent on mangrove fringe ponds for their survival, eating mollusks and crustaceans including the mangrove oyster. In addition, the only place that the terrapins appear to bread is in the sand bunker of a golf course nearby the ponds.

Little is known for sure about the terrapin’s ecology, and the Bermuda Biodiversity Project is currently working towards gathering more information about the terrapins in order to construct an effective management strategy. It’s clear that the preservation of their habitat, and cooperation from golf courses for their nesting grounds, have been very important steps to their conservation.

It is estimated that Bermuda has a population of the terrapins resting in the hundreds, rather than the thousands. They are a native species on the east coast of the U.S. and likely reached Bermuda via the Gulf Stream. Harvesting the terrapins for food consumption decimated populations in America, and their numbers are still affected by the continued practice today.

Spittal Pond: Birds
Enclosed in the largest nature reserve on island, Spittal Pond is a very important brackish pond habitat in Bermuda, owned and managed by the Bermuda National Trust. Surrounded by mud flats and salt marsh, and giving way to dense woodland, the pond and surrounding habitats provide a haven for both native and migratory birds. Especially for over-wintering birds from other countries, the pond is an essential feeding habitat.

During hurricanes, the pond is sometimes washed over by the sea because it is so close to the coast. It has been surmised that this mixing with the ocean has in the past allowed American eels to be found in the pond. The tiny, transparent leptocephali larvae of the American eel are thought to spend their early developmental stages in the Sargasso Sea. If a few larvae were washed in to the pond, the eels would be unable to get back out and would have to complete their entire life cycle in the pond.

Not much is known about the life cycle of the American eel, which is a fresh water animal, but recent research has revealed that it is very complex. Eels appear to breed in the Sargasso Sea where their larvae float on ocean currents and develop. Semi-mature eels then migrate into inland streams. When they reach fresh water, they grow and mature for many years before migrating back into the Sargasso Sea to breed again.

Walsingham Pond – Biodiversity
This pond is also contained within a nature reserve, known locally as Tom Moore’s Jungle. The celebrated Irish poet Tom Moore is said to have written many love poems here to his neighbor at the time, a married woman. Tom Moore’s is full of woodland trails and caves, surrounding the central tidal pond, protected by the Walsingham Trust.

The pond itself is actually formed from a collapsed cave. One side of it is quite shallow, which probably used to be an area of small dunes near the original cave. On the other side, stalactites still cling to the rocky overhangs, and the large limestone rocks in the water were part of the cave roof before collapse. The pond is affected directly by the ocean tides as it is fed by an underground connection to the sea. This flow of water allows for a wide array of marine life to inhabit the pond, much larger and more diverse species than could inhabit smaller fresh water ponds.

The pond is fringed by red and black mangroves, with red mangroves closer to the water. The prop roots of the red mangrove can extend 2 meters down into the water, and provide a surface for sessile organisms, like sponges, tubeworms, and anemones, to attach. The pond also supports a healthy population of upside down jellyfish, which, as their name suggests, lie upside down on the bottom of bodies of water, and can release stinging cells into the water. Mangrove habitats are one that support a great wealth of biodiversity, comparable to coral reefs or rainforests.

Walsingham pond also reportedly supports one ancient green turtle. Green turtles used to breed in Bermuda many years ago, though they don’t anymore. At this time, it is suspected that one hatchling came into the pond and subsequently grew too big to get back out again. Now, if you’re lucky you might spot the reptilian behemoth if you spend some time around the pond.