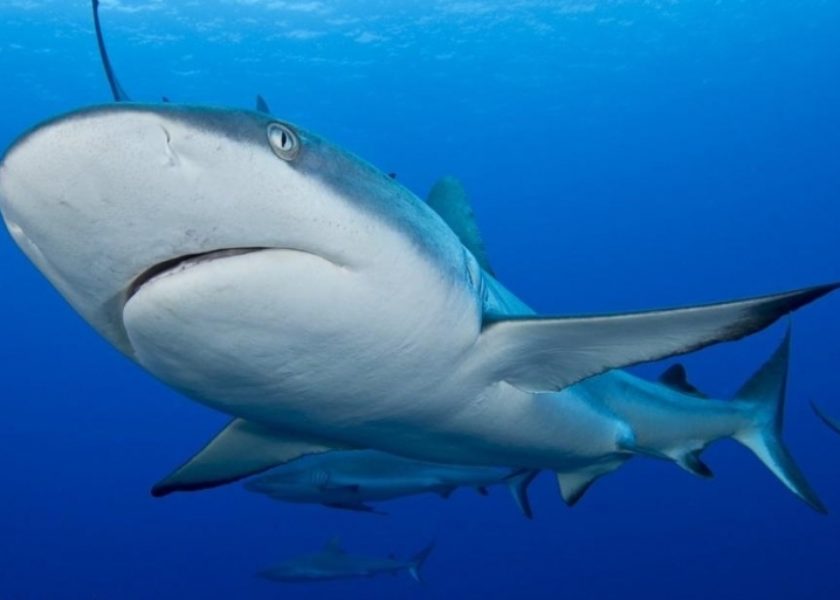 Four Species You Might Spot on the Open Ocean this Winter

Though winter brings colder winds, and sometimes choppier waters, this season can also hold some of the calmest days on the sea. Outside of the hurricane season (June 1- Nov 30), it’s possible to find the waters outside of the reef lying eerily calm. If you do get the chance to venture into Bermuda’s deep ocean this winter, here’s what you might see.

Dusky Shark
Dusky sharks migrate towards the poles in the summer and towards the equator in the winter, meaning that in colder months there are more of them around Bermuda. Through working on the Bermuda Shark Project, Choy Aming has noticed the abundance of dusky sharks in our waters. They usually travel in packs of about four, but during one dive he found himself surrounded by some sixty sharks.

The sharks usually grow to about ten feet long, and are generalist feeders, though they usually prefer to hunt for fish along the bottom. If you’re feeling really adventurous, consider chumming the water on your cruise to attract these fearsome predators.

Hawksbill or Loggerhead Turtles
You have the opportunity to see a wide variety of turtles in Bermuda’s pelagic waters, but the most common probable spots are hawksbill and loggerheads. Inshore, young green turtles abound in seagrass beds. However, further afield, hawksbill turtles are common in offshore reefs where they feed on sponges. You won’t see a fully-grown hawksbill in Bermuda’s pelagic seas because of their life cycle, but you might see one as big as about 10kgs surfacing.

During the winter months, loggerhead turtle hatchlings sometimes wind up on Bermuda beaches after heavy storms, blown in from the Sargasso Sea where they spend their early years. On the water, you might see them living in mats of Sargassum weed.

Leatherback turtles are very occasionally spotted offshore. These turtles are the largest living reptiles, with deep black leathery shells adapted to their pelagic, cold-water lifestyle. They can tolerate colder temperatures than other sea turtle species, and have been spotted as far north as Iceland. Not much is known about leatherback life cycles as they spend their entire lives roaming the deep ocean, but they can be seen passing Bermuda during their long distance journeys.

Flying Fish
Flying fish are a common sight outside the reef. They skitter above the water, disturbed by the boat’s movement. They are able to glide over the water for a considerable distance, propelling themselves out of the water and maintaining height with their wing-like fins.

The epipelagic zone, the top layer of the deep ocean where sunlight can reach, is one of the most ruthless places to live, especially for a small fish. With nowhere to hide, the flying fish’s ingenious method has allowed them to survive attack from larger fish and sharks.

Other small fish who live here take refuge in floating sargassum, a living habitat on the surface of the water. Curious behaviour of flying fishes has been observed by scientists, who believe that some of them make peculiar nests in the sargassum for their eggs.

Game Fish
Tuna, wahoo, rainbow runner, and marlin are all year-round residents of the pelagic waters around Bermuda. In their natural habitat, the power of these fish can truly be observed, as each is shaped by the harsh environment around them, and sculpted into specimens of speed, strength and endurance.

Most of these fish are threatened by the results of overfishing. They are all carnivorous fish, designed to chase prey and survive in the deep ocean. Like the shark, they may be attracted to your boat by a chum slick.

In winter however, various pelagic species migrate away from Bermuda’s cooler water to more equatorial locations. Here are a few species that you are less likely to spot.

Tiger Shark
It’s unlikely to see a tiger shark during the winter as research by the Bermuda Shark Project has shown that they prefer warmer waters, and undergo a precise migration that leads them down to the Caribbean for the winter and back to Bermuda again when water temperatures hit 80 degrees.

Humpback Whale
In March and April humpback whales are seen passing Bermuda as they migrate to summer feeding grounds at the poles. This migration route is strict, and humpback whales won’t be seen in Bermuda outside of those two months unless they are confused or sick.

Sperm whales, however, may be seen at any time in Bermuda’s pelagic waters. This species does not have a set migration route. In March 2010, a juvenile sperm whale carcass was washed ashore, as reported by whale expert Andrew Stevenson. Live whales have also been seen in deep offshore waters.

Manta Ray
Like tiger sharks, manta rays prefer warmer water. There have been a few sightings of them in deeper waters in the summer months, where they like to hang out in currents and filter feed for plankton.

Whale Shark
These sharks enjoy warm temperatures, so they are unlikely to be seen in Bermuda in the winter, though it is possible. They can be seen cruising along drop offs, and near the surface, sifting the water for plankton. Sometimes they gather in great numbers according to coral or fish spawns, feeding opportunistically. Usually however, the sharks are observed singly, and are slow swimmers. Whale sharks are grey with a beautiful white dot pattern, which is distinct to each individual.