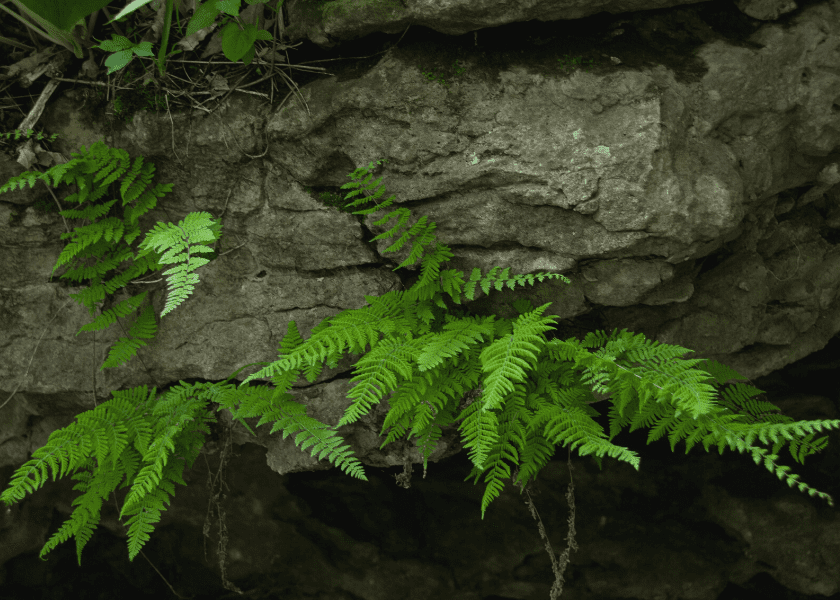 This article was taken from our archives. It first appeared in our Fall 2006 issue. It appears here exactly as it did originally.

The family of Sir Howard and Lady Trott donated Sears Cave to the Bermuda Audubon Society in their memory in 1990. With an area just over one third of an acre, it is considered most impressive for its environmental features: a large limestone sink, rare Bermuda ferns and endemic native forest.

“It was David Wingate [the government conservation officer at the time] who suggested we donate it to the Audubon Society,” says Reeve Trott, Sir Howard’s grandson. “He thought it important because there were a lot of endemic ferns there that didn’t really grow anywhere else.”

The geological formation is bordered on the south by an arable field and by woodland reserve on other boundaries, contained in a rural environment. According to the Audubon Society, “Sears Cave Nature Reserve is a small but interesting reserve in Smith’s Parish. It forms the remains of a large cave chamber in which the roof has collapsed, exposing it to the elements. The resultant deep, steep-sided depression is an ideal habitat for ferns, being sheltered, shady and humid. It is the location of the largest remaining colony of cave fern Dryopteris speluncae, a species found in only three other tiny locations on Bermuda. The long spleenwort Asplenium heterochroum is also present in small numbers.”

Wingate announced the cave’s official opening as a fern sanctuary 14 years ago, describing it as an important ecological area because of the cave fern found there. He said the plant was established in only three other sites on the island, all in the Walsingham network of caves. According to Wingate, another reason existed for preserving the geological formation. “This is the first nature reserve specifically set up for ferns,” he said. “It is one of very few sinkhole caves exposed in the central parishes.”

The Audubon Society believes future generations will see even further benefits from the cave’s preservation. “The site is an ideal location for establishing a botanical reserve containing many of Bermuda’s upland fern species. Ferns that could be reintroduced into the cave include the endemic Bermuda shield fern Dryopteris bermudiana and Governor Laffan’s fern Diplazium laffanianum, and the native toothed spleenwort Asplenium dentatum and plume polypody Polypodium plumula. Sears Cave is also interesting in that it may have been a roosting or nesting site for Bermuda’s only resident breeding bird of prey, the barn owl Tyto alba. At present, a wild hive of honeybees Apis mellifera make their home in the upper reaches of the cave.”