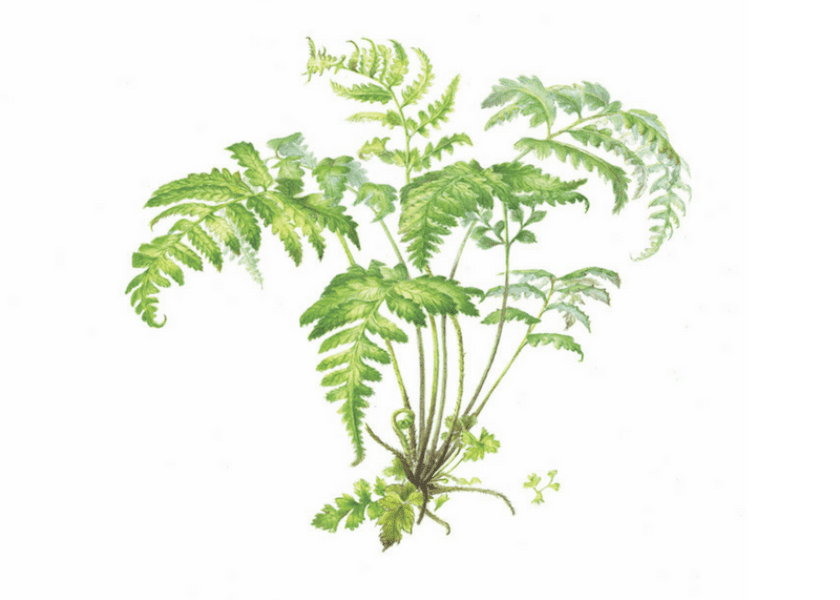 Jennifer Davidson’s beautiful painting of Bermuda’s endemic Governor Laffan’s fern (Diplazium laffanianum) pictured above, was included in an exhibition entitled “Botanical Art Worldwide: Flora of Bermuda,” in 2018. Perhaps she could have painted an equally exquisite endemic Bermudiana but that wouldn’t have had the same significance. Why? Because while Bermudianas during the spring were flourishing in gardens and in the wild for the public to enjoy, the only healthy Laffan ferns in Bermuda were, and still are, growing in sealed containers at the Department of Environmental and Natural Resources. Officially, they are “extinct in the wild.” Given they are unique to Bermuda, this is sad. But their survival has long been at risk. Indeed, interest in this fern goes back to the nineteenth century.

It was named after Governor Laffan, who sent a live specimen to Kew Gardens in 1880. Six years before, his predecessor Governor Lefroy had sent a dried specimen to Kew where, no doubt, it still remains in their herbarium. Sir C. Wyville Thomson, who led the Challenger expedition, visiting Bermuda in 1873, also saw it and included a drawing of it in his Bermuda Botany. According to Nathanial Lord Britten’s Flora of Bermuda, the fern lived in caves and crevices between Harrington Sound and Paynter’s Vale. Britten saw it in the autumn of 1905 by which time it had become very rare. By 1913 he couldn’t find it at all in that area or in any other part of the wild. In 1914 he saw two specimens that were protected in a private greenhouse but was unable to reproduce the plants because their spores were too immature. So even in his time, it was nearly extinct, possibly because fern collecting had become an extremely popular pastime during that period.

However, the story of Laffan’s fern did not end there. Fast forward to 2002 when the then Department of Conservation sent spores to the US for propagation at the Henry Doorly Zoo in Omaha. A few ferns were returned to Bermuda in 2009, 2012, and 2014 and are housed at the government plant nursery. As Alison Copeland, a botanical officer of the Department of Environmental and Natural Resources, explained, between November 2014 and March 2015 Laffan’s ferns were planted at three sites in the Walsingham Nature Reserve while the following November eight more were planted in Sears Cave in Smith’s Parish. About 21 plants were doing “nicely” by 2015. Even so, Copeland was only cautiously optimistic to the Royal Gazette. “We really won’t be able to call the reintroduction a success until the ferns survive to adulthood and reproduce viable juveniles in the wild. What we eventually want to see are self-sustaining populations that do not need any assistance from us.”

Sadly, she was right to be cautious. None of the plants made it, thanks to Hurricane Nicole which struck in the October of 2016. She believes it wasn’t so much the wind that killed them but the salty rain that accompanied the storm. In the meantime, Laffan’s fern is now on the IUCN (International Union for Conservation of Nature) Red List of Threatened Species. Enemies other than hurricanes include the increase of invasive ferns such as Japanese and holly ferns in our caves. “You need climbing gear to get them out,” says Copeland. Additional hostile factors are the loss of habitat caused by islandwide building, the rising tide level, and the impact of tourism on our caves. People swimming in the caves do not help.

The story is not over yet. Copeland hopes to relocate more plants into Walsingham, although not into Sears Cave as this seemingly bottomless pit is very difficult to access. Another shipment of fern “eggs” from the zoo is due to arrive in Bermuda before the end of the year. Meanwhile, Jennifer Davidson hopes that her painting helped to “drive to local and international audiences alike, the sad reality of plant species extinction.”

Who Was Governor Laffan?
Born in 1821, Sir Robert Michael Laffan was an Irish officer of the Royal Engineers, politician, and governor of Bermuda from 1877–82. He served in many parts of the world, including other islands such as Mauritius, Ceylon, now Sri Lanka, Malta, and Gibraltar. While in Gibraltar, he apparently introduced bougainvillea to Bermuda by sending a plant to Governor Lefroy, who duly planted it at the entrance to Government House. While governor himself, Laffan hosted Queen Victoria’s grandsons, the Duke of Clarence and the Duke of York, who became King George the Fifth, at Mount Langton, asking them to plant mango trees in the grounds. Two years after Laffan sent “his” fern to Kew, he died at Mount Langton on March 2, 1882. His body lay in state for two days and was buried with military honours in St. John’s Churchyard. A street branching off Cedar Avenue and located behind St Theresa’s Cathedral was named after him.