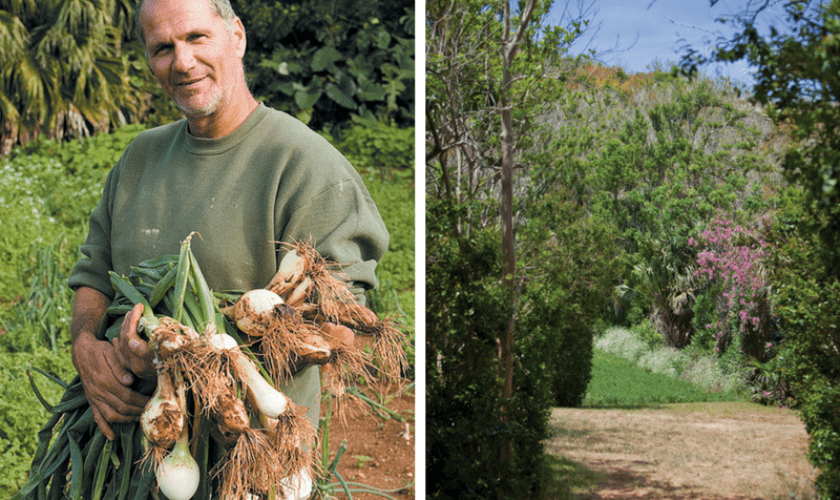 From its rocky coastline and panoramic views to lush trails and an agricultural heritage as rich at its soil, Hog Bay is a parkland oasis with a little something for everyone.

Turn the clock back to 1617 and imagine a young man of 26 with a theodolite, complete with compass and tripod, diligently surveying the recently settled islands of Bermuda. His name was Richard Norwood and he was instructed by Governor Daniel Tucker to divide the land other than St. George’s, St. David’s, Longbird, Smiths, Coopers, Coney and Nonsuch Islands into eight “tribes,” each to be named after the main shareholders of the Bermuda Company. He was then to subdivide the tribes into 50 plots of 25 acres each. Norwood correctly calculated that once the land was divided there would be a small piece of terrain left over, an overplus, as he called it, which, because he was working east to west, would consist of land at Bermuda’s most western tip.

Much of the land he measured was uncultivated, covered with hillsides of cedar and palmetto, and, in many areas of the island, plagued with rats. Part of his mandate was to assess the fertility of the soil. Once he had reached within a mile of the western end of Main Island, he saw a 200-acre valley between Southampton and Sandys Tribes (now called parishes) that had “fattee and lustye soyle.” When told about it, Governor Tucker took an immediate interest. Promised by the Company three shares of land as a bonus for his service, he cunningly instructed Norwood from now on to carry out his survey from west to east. His excuse was that since the rats had not yet attacked that part of the island, the survey would be easier to carry out.
As a result, the overplus conveniently included the boundaries of the lush valley, which the governor promptly claimed. Tucker built upon it an elaborate house, near what centuries later was to become the Port Royal Golf Course, immediately offending both settlers and the Company. Why, asked the Reverend Lewis Hughes, should Tucker have this “flauntinge cedar mansion” when “God’s House” compared was just a “thacht hovel”? Tucker took the matter to London. It was decided the overplus should be divided into sevenths, with Tucker retaining three-sevenths, including his house. Much of the rest was allocated to Southampton for church land and to Sandys Parish.

According to Conservation Officer Jeremy Madeiros, by 1623 Southampton (then known as Port Royal) and Sandys had the largest population of all the tribes, probably because they contained the best farmland in Bermuda. “The lighter, sandy soils were presumably easier to till with the primitive farm tools than the heavier, clay-rich soils typical of the middle and eastern tribes. Since the colony’s emphasis was so heavily focused on the cultivation of tobacco and maize in the early years, it is likely that these were the main occupations of the tenants on this property in the early days of Bermuda’s settlement.”

Fast forward to 2011, and you will see on a modern map a neat green oblong marked Hog Bay Park off Middle Road just before Wreck Hill in Sandys Parish. A road sign opposite the park’s car park and main entrance, Overplus Lane, gives the clue: the land contained in the park consists of 32.23 acres from Norwood’s original overplus. And the name Hog Bay? On early maps based on Norwood’s survey, Hog Bay was the name given to what we now call Pilchard Bay, Ely’s Harbour’s southern inlet, and it recalls the herds of wild hogs left in Bermuda by sixteenth-century Spanish sailors. Today, its unspoiled open countryside is astonishing considering the number of closely built houses surrounding three of its boundaries. 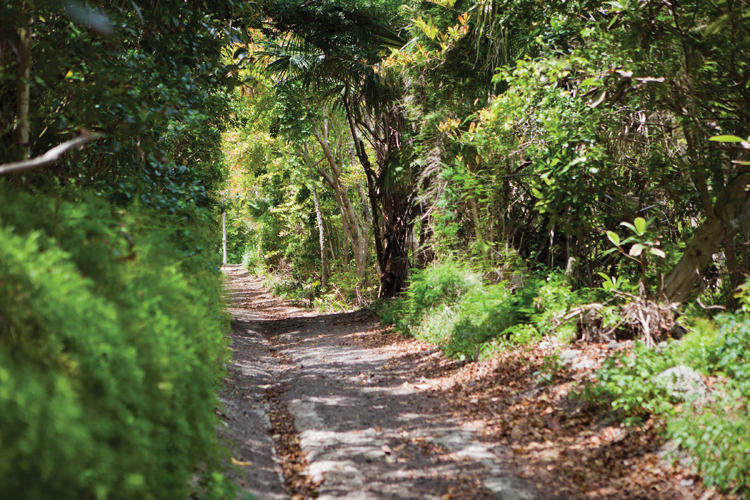 Enter the park and you immediately feel as though you are walking in private farmland, which in a sense you are since much of the land has been farmed continually from the seventeenth to the twenty-first century. In 1873, Wyville Thomson, visiting Bermuda as chief scientist of the HMS Challenger expedition, was particularly struck by the farming in this area, describing it as “the richest and best cultivated, and perhaps the prettiest, part of Bermudas. The houses here are numerous and good, and the market-garden style of culture is fully carried out…the fields and gardens are small, separated and intersected by tall oleander hedges and all the rugged ground is covered with cedar woods…. The soil is excellent; red earth with decayed vegetable matter, and mixed with it a white meale—that is to say, the large-grained free coral-sand.” He describes “delicious early potatoes” being sent to New York at £17 a ton and tomatoes at 3 shillings a box, as well as onions at 7 shillings and sixpence a box. 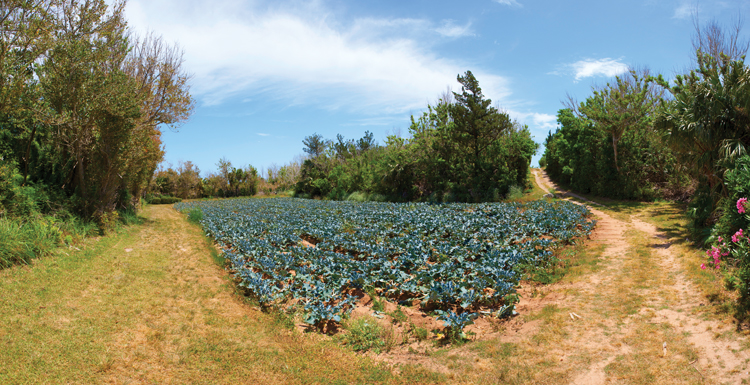 Madeiros explains that previous owners included Sir John Heydon, governor of Bermuda from 1669 until 1681, Captain Henry Tucker and later the Outerbridge, Brown, Trott, Fordham, James and Mayor families. The miracle is that none of the families subdivided their land or sold parts of it for development during the boom period between the 1960s and 1980s. In 1986 the Bermuda Government bought the Fordham Estate, and in 1990 the James and Mayor Estates for a total of $7.925 million.
These days, Hog Bay’s agricultural heritage continues to flourish, thanks to Junior Hill, a first-generation farmer who has been cultivating the land since 1982, before it became Government-owned parkland. He tends 15 fields, approximately seven acres in all, growing a wide variety of crops such as lettuce, leeks, broccoli, string beans, potatoes, carrots and zucchini. During the farming season (September to May), he can be seen working the fields some five hours a day despite the fact he also farms at Astwood, Blue Hole and Penhurst Parks. 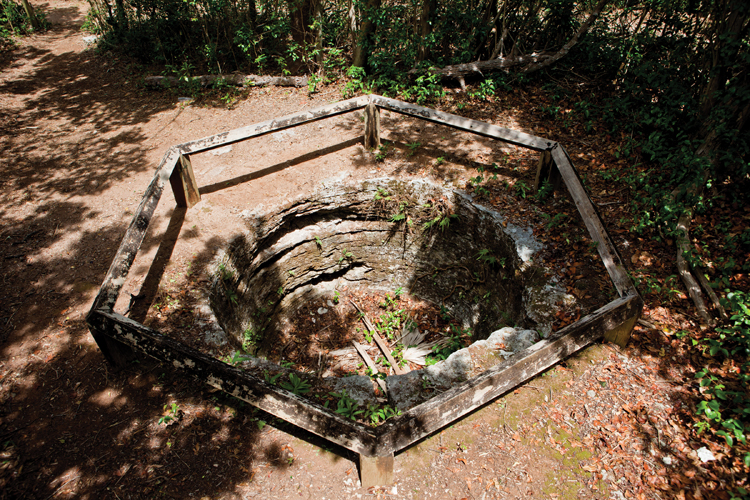 Hog Bay, he says, is one of his favourites, although in the past there were challenges to overcome. “There were motorcross bike scramblers at Hog Bay,” he explains. “It took five years to get them out of the park. Sometimes tourists got knocked down.” He gives full credit to the Department of Parks and Craig Burt in particular for “doing a fantastic job” of protecting the parkland from them. Pit-bull fighting was another problem, but with more and more visitors exploring the park, it is not as common as it once was. Controlling feral chickens was also an ongoing challenge, which for the moment he has overcome. But the most pressing problem is theft. “It’s a problem islandwide,” he says. “On average, farmers lose $500 to $700 of crops a week to thieves.”

Interestingly, assizes records in the early years of settlement reveal similar situations: “Thou by the name of Ffrances Powell of the Trybe of Sir Edwyn Sandys in Somers Islands labourer art indicted…thou didst steal six score Eares of corne of the goods of William Elie of the same Tribe ycoom to the value of three shillings….” Powell was acquitted and so two years later was Richard Towell “for stealing one potato weighing 2 or 3lbs.” Perhaps the victims of the thefts were as sanguine as Hill: “You just have to get over it and learn how to deal with it.”

It’s easy for visitors to share the pleasure Hill takes in Hog Bay Park. One trail, past an old lime kiln (a limestone-lined hole in the ground, once used for burning lime), leads to leafy tunnels through thickets of palmetto, Mexican pepper, fiddlewood and newly planted cedars. Fruit pickers love the loquat trees in February. Other trails follow the perimeters of the fields, sometimes allowing easy views of birds, both local and migrant, that frequent the park. The woodland areas, hedges and newly ploughed fields attract all kinds of warblers. Hill remembers the late Eric Amos, the well-known ornithologist and artist, birdwatching at Hog Bay at least twice a week. He always kept Amos’s number on his phone so he could ask about birds he didn’t recognise. “I’d phone Eric up and describe a bird to him. He’d say, ‘Has it got this, has it got that?’ And then he’d tell me what it was. He really knew his stuff. He knew so much about birds.”

Andrew Dobson, president of the Bermuda Audubon Society and author of A Birdwatching Guide to Bermuda, agrees that Hog Bay is a Mecca for birds. Birds of prey, such as merlins, ospreys, rough-legged hawks occasionally drop by. In the evenings when Hill is still working the fields, he sometimes sees a barn owl. 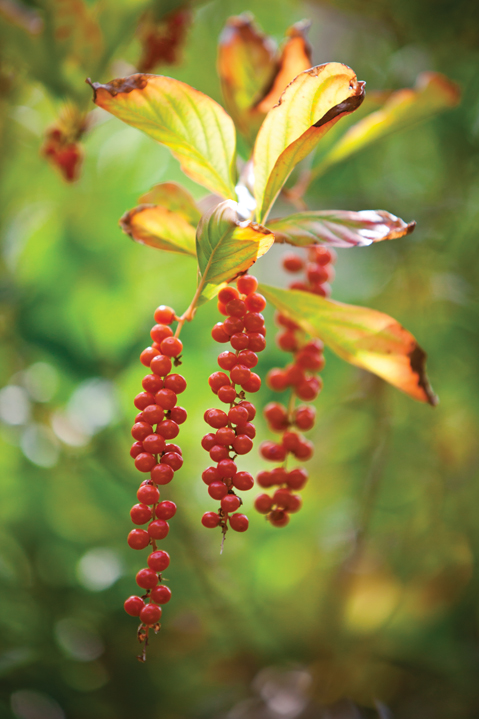 But the park attracts other creatures as well. In April 2011, one fallow field ablaze with weeds—stock, sow thistles and poppies—was like a magnet for hosts of white cabbage butterflies and also, more usefully, bees. Because of a marked and worrying decrease in these insects islandwide, Hill wanted to test the bee situation to see if it would be worthwhile growing cucumbers that depend on them for pollination. So the field left fallow was an experiment. Would the bees come? Comfortingly, they did.
Fallow fields, incidentally, allow nutrients to be replaced in the soil. “From June to September,” Hill says, “I plant cow peas and oats to give the soil nitrogen. Besides, we have a lot of migrant birds then and I like to have seed for them.” Ideally, fields should be left fallow for a year, but he explains that arable land is scarce. “Not many farmers can do this anymore. Sometimes I leave half or a part of a field fallow to give the soil a break.”

The fields closer to the ocean have less rich soil as the land gives way to rocky, windswept coastline on the western boundary, but the rough terrain has its own charm. One trail on the southwestern part of the property leads to Sugar Loaf Hill, which offers panoramic views over cedar tops of the Wreck Hill peninsula and St. James’s Church to the north and the City of Hamilton and Spanish Point to the east and northeast. The curve of St. George’s can be seen behind Spanish Point. And to the west, the open turquoise ocean meets the horizon. Another pathway takes you down to the water and to Brown’s Bay, which comes and goes with the tide. There you can wade for miles without going out of your depth and gaze at fishing boats making their way through Hogfish Cut.

In contrast with the red fertile soil of the fields is a hillside overlooking the ocean and dotted with the silver skeletons of blighted Bermuda cedar trees caught in the scale-insect plague of the 1940s and 1950s. The scene inspired Andra Simons’s brilliant poem “Cedar Graveyard” and comes to life in the following lines:

Today, as we experience more and more development, we are grateful for this parkland oasis that takes us back to Bermuda’s era of rural tranquillity, when many a farmer would have agreed with Hill that “a far worse thing than farming is having to go to town and put on a tie.”