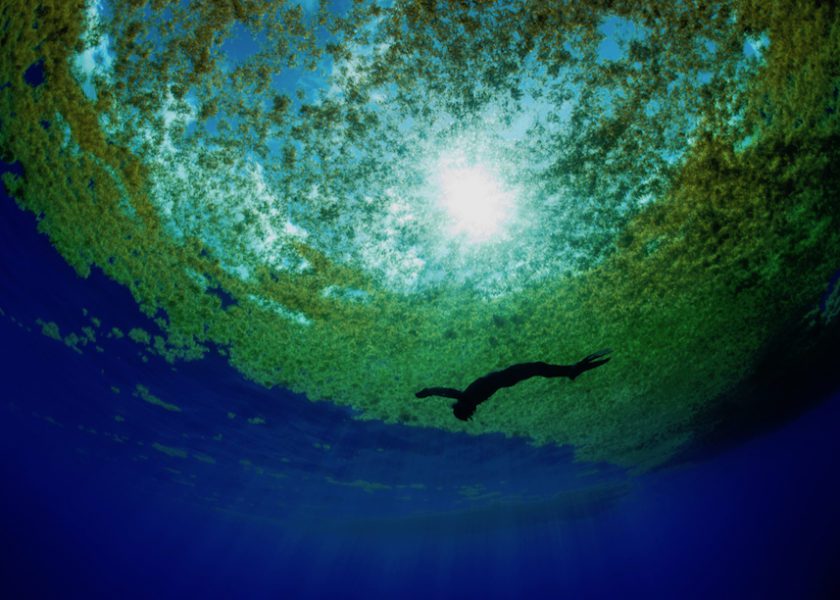 A media embargo has finally lifted from a group of highly skilled Bermudian and overseas naturalists who set out to document the golden rain forest of the Sargasso Sea. In a series of summer expeditions between 2011 and 2014, National Geographic photographers exposed the difficult-to-access ecosystem more dazzlingly than ever before. The photographs will allow members of the public to engage with dynamic high-seas creatures usually only experienced by a handful of people.

The team was directed by the late Teddy Tucker, whom Philippe Rouja, marine archaeologist and custodian of historic wrecks for the Bermuda government, has touted as the foremost expert on Bermuda’s oceans. “It would take you years to put the time in to get the images we did, but with Teddy, you were guaranteed to get those shots,” Rouja said. Tucker died five years ago as National Geographic was planning another Sargasso Sea expedition. Though no one involved was allowed to talk about it at the time, the photographs this expedition would produce were due to appear on the pages of the coveted yellow magazine.

In an interview, Rouja explains that the project’s inception was due to Tucker’s connections with the magazine, saying, “I don’t think anyone could fathom how interconnected he was to the maritime world outside of Bermuda.” In his role as Bermuda’s shipwreck custodian, Rouja set off to a conference in Washington to talk about reasons for hope in marine conservation in 2009. During the conference, marine biologist legend Sylvia Earle proposed “hope spots,” marine protected areas in the high seas which are difficult to protect since they are not owned by any country. Talks at the conference of making a bid to protect the Sargasso Sea laid the foundation for the National Geographic’s interest in the area, and their photographic project based in Bermuda.

Bermuda has always been involved in ocean conservation—in fact, we may have been one of the first nations to instate legislation to protect our seas. In a 1620 bill, it was recognised that turtles were a finite resource vulnerable to overfishing on Bermuda’s small platform. Noticing that they were “so excellente a fishe,” early Bermudians prohibited the kill and capture of “any young Tortoyses” that were less than 18 inches in breadth or diameter. Unfortunately, early Bermudians still succeeded in completely decimating our nesting turtle population, but thanks to the Bermuda Turtle Project conservation initiative, our shores are one of the most important feeding grounds for immature green turtles today.
Another notable instance of our recognition of the fragility of the oceans was our ban on fish pots and protection of parrotfish. These beautiful fish are a keystone species for coral reefs because they almost single-handedly prevent the reef surface from becoming dominated by algae, plants that smother the living corals beneath. As parrotfish were fished out, some Caribbean reefs have seen disastrous consequences. Bycatch of parrotfish was a big problem in Bermudian fish pots, and after they were banned in the 1990s, parrotfish populations returned to more healthy levels.

Teddy Tucker wanted to document the protection of the Sargasso Sea, and with the establishment of the Sargasso Sea Alliance in 2010, now the Sargasso Sea Commission, which Rouja was a part of, the project gained momentum. National Geographic photographers David Liittschwager and David Doubilet, who had worked with Tucker before, travelled to Bermuda for a period of three weeks for three summers. Rouja expressed the irregularity of this gesture, which was a testament to Tucker’s influence, saying that usually it was lucky to get a photographer on a conservation project for just three days. It was on the moonless nights that the team set out under Tucker’s instruction, and his experience on the water led the photographers to come close to little-seen animals—ocean squid, flying fish and even a colossal blue marlin.

Chris Flook, naturalist and former collector for the Bermuda Aquarium, was also part of the team, providing an extra boat and more practical knowledge about the ocean’s creatures. David Doubilet was a wildlife photographer, capturing the Sargasso Sea creatures in their natural habitat. The team anchored off Challenger Bank at about 5:00 p.m., and would wait until dark. With two HMI lights pointing into the water, Doubilet would hang off the boat by a rope and wait for things to be attracted to the light. This was a method Tucker had been using since the ’60s. “Teddy predicted it all,” Rouja said, remarking that Tucker had spent so much of his life on the water that he knew what time certain animals would enter the scene, such as squid and copepods.

The team encountered some unexpected visitors however, like when a tiger shark appeared out of the inky blackness. Rouja recalls the whole team feeling like something was near. In order to make Doubilet’s position less vulnerable, they arranged the two boats in their flotilla so that anything attracted to the light would have to go through a bit of a maze to get near Doubilet in the water. Sure enough, a tiger shark swam into the scene moments later, but leviathans can often be upstaged by the tiniest creatures in the Sargasso Sea.

Liittschwager concentrated on macro shots and very small creatures. Instead of photographing in-water, Liittchwager captured specimens and placed them into a small holding tank to be photographed on crisp white backgrounds. Astounded by the amount of life in one little ball of sargassum, Rouja remembers Liittschwager saying, “If I keep going smaller in terms of what I’m seeing, it just keeps expanding.” If you’ve read about the Sargasso Sea before, you will know the cast of creatures: sargassum crab, sargassum fish, sargassum shrimp, animals highly specialised for a life adrift.

The Sargasso Sea is so important because it is the habitat that many large pelagic fish inhabit during their first life stages. Mahi mahi, sailfish, and many species of turtle and shark are just some of the creatures that begin their life in the Sargasso Sea. At this point, they are very small and vulnerable to predation. In the open ocean, they avoid many of the larger reef predators that would swallow them in a heartbeat. The only thing to shelter under in the big blue expanse is sargassum.

After each boat trip, Liittschwager brought his specimens back to a lab that was set up in one of the hotel rooms at Cambridge Beaches to be photographed. It was a top priority for Liittschwager to keep the animals alive and release them safely after their picture was taken. Doubilet often dived at night, capturing wide-angle photographs in situ. Rouja acted as a dive safety officer on the boat, remarking that the photographers got so absorbed in their work that it was prudent to act as a backup to make sure their dives didn’t go on too long.

Liittschwager’s style of photography brings stunning small creatures to the forefront, in all their candid glory and unencumbered by the distraction of a natural background. Rouja says that one’s attention must be directed to the right places in the Sargasso Sea. Viewed from above, it may look like an ocean desert of endless blue water, occasionally broken by yellow sargassum weed—when a handful of sargassum is isolated in a bucket, however, you can see the whole universe within.

Liittschwager often displays his photographs larger than life, blown up and projected on the sides of buildings in areas such as Times Square. “When you see his work on that scale, it’s like going to church, it’s breathtaking,” Rouja says. For many people, it’s likely the first time they have even considered the microfauna Liittschwager captures—and what stares back at you is poised, virile, “coquette,” as Rouja puts it.
No longer are these animals faceless, wriggling things of which we have only a vague understanding. Advances in our knowledge of the oceans, as well as the ability to capture brilliant imagery, are forcing us to view these animals as sentient, animate and characteristic, and to confront the feeling that they are as alive as we are.

The aim of these photographic voyages was to create an awareness campaign for the Sargasso Sea, but Rouja emphasised that the team should not be thought of as the proprietors of these experiences. For every story like the tiger shark encounter, Bermudian fishermen have ten. Indeed, it was fishermen’s practical knowledge that allowed the team to locate the specimens that they did, and Rouja portrayed Teddy Tucker and Chris Flook as fundamentally part of a fraternity of fishermen, in addition to their having considerable conservation expertise.

Choy Aming of the Bermuda Shark Project echoed similar thoughts about the importance of fishermen for conservation when The Bermudian interviewed him last year. He said that much of the historical data the shark project possessed was from fishermen, who had been studying the behaviour of these animals long before scientists.

It is Rouja’s hope that by telling the story of the Sargasso Sea through photography, people who wouldn’t normally have the chance to undertake such specialist voyages could be right there inside the ecosystem itself. Bermudians especially should be interested in and protective of our surrounding Sargasso Sea, which recruits new species into our reef systems—making better years for lobster diving and other fishing—in addition to fertilising our banana trees. Just as shipwrecks provided our ancestors with much-needed goods and materials, the sargassum restocks our reefs with invaluable species, Rouja said.

Unfortunately, plastic pollution is threatening many areas of the world’s oceans and the Sargasso Sea is no exception. However, the presence of plastic can sometimes be a serendipitous thing in terms of species collection. “When we saw a plastic milk crate floating in the sargassum we would get excited,” Rouja said, because large structures like that attract animals in need of shelter, just like sargassum itself. Under one milk crate, the team found a bright trio of pufferfish, fanning their transparent fins in its shade.

In the Sargasso Sea, anything floating is cause for investigation—even if it’s alive. Just like remoras and small fish may congregate around a shark or a whale, the team found that sometimes the small animals in the sargassum would begin to flock around the divers, “suddenly you are the object they want to spend the day with,” Rouja recalled.

As the images begin to be released with the lift of the embargo, people will start to see them in publications by the Sargasso Sea Commission. National Geographic has already released a 2019 article loosely based on the voyages, but with the death of Teddy Tucker occurring before the work was really complete, the article was released with a different focus. The photographs are now in use by the Sargasso Sea Commission, and Bermudians should look out for an upcoming exhibition of the images, as well as a talk at BUEI on the project.

To find out more about Teddy Tucker’s life, visit the newly established website www.teddytucker.com set up by his daughter, Wendy.