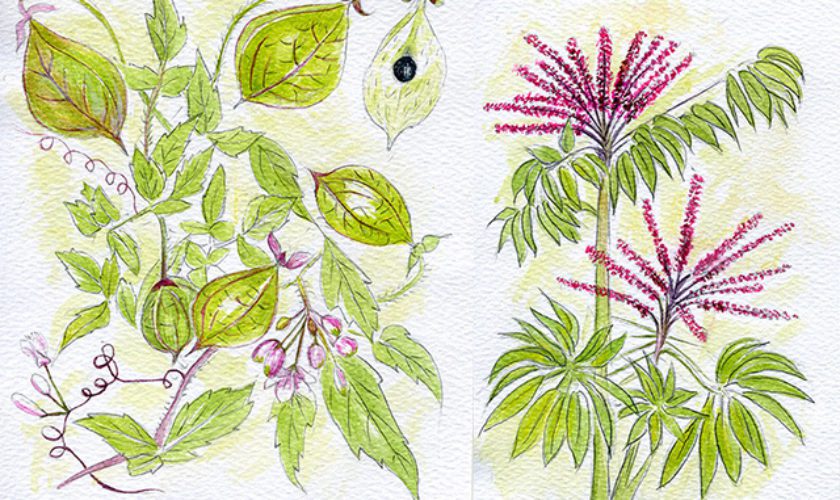 Gardeners and conservationists have been noticing a growing problem in Bermuda—the spread of the accidentally introduced invasive balloon vine (Cardiospermum grandiflorum) which is scrambling its insidious way across the island, from Wreck Road in Sandys to Paget Marsh, from Orange Valley in Devonshire to Spittal Pond in Smiths. Its woody, impenetrable webs can be seen choking cedars along the roadside in Paget and smothering a viburnum hedge south of the Trimingham Hill roundabout.
Of course the problem of invasive plants is not new. Controlling casuarinas, fiddlewood, Brazilian pepper, Indian laurel, Chinese palm and allspice, to name but a few, has been an ongoing battle. As Dr. David Wingate, former conservation officer, explains in a paper he is currently preparing, “The Issue of Native versus Introduced, Naturalised and Invasive Flora in Our Parks, Gardens and Nature Reserves: How to Resolve the Problems with a Minimum of Effort,” the problem goes back to the late 1940s when the dominant cedar forest became decimated.

Originally, he says, Bermuda had a flora “characterised by relatively uniform height, low stature trees which were dense-foliaged and rigid in growth form (ideal for withstanding powerful windstorms), but which formed a somewhat open-canopied forest.” Over time plants, often introduced by accident, began to out-compete our natives, all except the Bermuda cedar. By the nineteenth century, Wingate says, “Bermuda cedar canopy with a sagebush (lantana) under-storey became the definitive natural forest cover of Bermuda for over a century. Although most of the less-adaptable native flora became scarcer during this time, resulting in a lower native biodiversity, this was compensated for by a higher biodiversity of introduced species, albeit mainly in our managed parks and gardens.” The sudden loss of the cedars has meant invasive trees and plants have steadily become dominant in Bermuda’s unmanaged, natural woodlands, threatening Bermuda’s biodiversity. The casuarina, for example, was deliberately introduced as a quick solution to Bermuda’s treeless landscape but now dominates the coastline and is hastening cliff erosion. Because these invasives are aggressive self-propagators and taller than the replanted cedars and other endemic trees, let alone our native coastal flora, they out-shade them, making it difficult for them to thrive.

Since the 1970s and 1980s more invasive plant combatants have joined the battle. As previously mentioned, the balloon vine is one but there are three others, also particularly pernicious: the Queensland umbrella tree (schefflera actiophylla), the giant wild mimosa or jumbie bean (leucaena leucoocephala) and the shrubby, “stinky”clerodendron (clerodendron sp). All the plants are not without their attractions, which may partially explain why they are becoming more widespread since many members of the public may not understand why they should be removed. The balloon vine, for example, has pretty white flowers and its “balloons,” appearing between March and January, resemble paper-thin, ridged Chinese lanterns, irresistible for children to pop. Unfortunately, the balloons contain countless seeds which create impossible numbers of seedlings. Starlings, themselves an invasive species, don’t help either because they help to disperse the seed by flying all over the island. 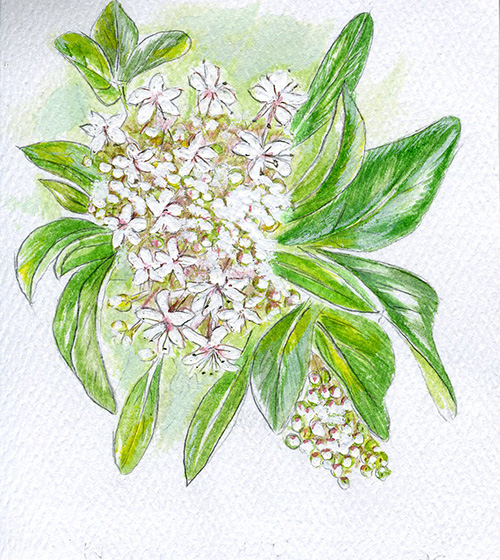 The umbrella tree, an epiphyte mentioned in the 1971 Garden Club’s gardening book as a suitable house plant, is actually still sold in plant nurseries and is a popular tree for people who want an exotic touch in their gardens because of its glossy leaves and dramatic spikes of red flowers protruding from the tree top. However, it is the tree’s speed of growth which presents the problem. “It grows with incredible rapidity,” Wingate says. “And it germinates everywhere—in the axles of palmetto, in stone walls, everywhere.” He dubs it the new Indian laurel tree, which is also known for taking every opportunity to germinate in all sorts of places.

The shrubby clerodendron, says Wingate, “is shaping up to be the new Brazilian pepper because of its multiple flowers, admittedly attractively fragrant, that turn into multiple berries.”

“Its germination all over the island is fantastically high,” he says. There are other clerodendrons that are not so invasive that fit well in gardens. The shrubby one can be identified by the foetid, sweaty smell of its leaves when crushed.

Lastly the giant wild mimosa is also threatening an islandwide takeover. In fact Bermuda has long had a low-growing wild mimosa with which this giant version is now hybridising. In his paper, Wingate points out that the invasive trees taking over from the cedars are not particularly useful as a source for timber, neither are they salt or hurricane resistant. The mimosa on the other hand, as Drew Pettit, director, Conservation Services and acting director, Environmental Protection, says, “is a nitrogen fixer and able to survive in all but the very poorest soil conditions. Coupled with its high salt tolerance, it does very well in disturbed ground and salty environments.”

It also has its uses in countries such as the Philippines where, because of its high protein content, farmers use it for cattle fodder. It can be used to create continually sprouting fences that cattle can eat from. It is also used as a source of fodder for giraffes in Africa. However, Wingate says, it should never be used in an urban area such as Bermuda although it does not pose as much danger to the natives as some of the other invasives. It is more of a nuisance in cultivated gardens.  When the pods break, both the wind and the starlings can carry seeds all over the island.

All are listed as Category 1 invasives in An Illustrated Guide for Bermuda’s Indigenous and Invasive Plants, put out by the Bermuda government Department of Environment and Natural Resources and reprinted last April. As Pettit explains, “Invasive 1 are the worst and we advise removal and not to plant in natural areas like parks and reserves.”
Unfortunately, the four latest invasive plants are already in many of our natural areas. The balloon vine, as previously mentioned, is all over the island. Because of its preponderance in the Somerset area, it is on the verge of invading Hogg’s Bay Park. It has already spread its woody web to the Vesey and Gladys Morrell reserves. The wild mimosa or jumbie bean is particularly noticeable on Cooper’s Island while the umbrella tree, says Pettit, “can be found anywhere a starling will rest and defecate on. It’s particularly bad on Canary Island date palms and Bermuda palmettos. Interestingly there are several umbrella trees in the middle of Pembroke Marsh and they are completely safe as we cannot get to them.” The “stinky” clerodendron, he says, is an inland problem, as it likes sheltered, disturbed areas and roadside verges.

So what can be done? Key is recognising these invasives and not planting them in the first place. But once they are established, they should be controlled and, wherever possible, removed. Of the four, the balloon vine is the hardest to eradicate. According to Wingate, what has complicated matters in Bermuda is that balloon foliage was left at the Pembroke dump so that its seeds were in the compost being given to gardeners all over Bermuda. Similarly in Tulo Valley seeds were dropping from balloon vines festooned over its tree canopy into pots growing other plants. That problem has, at least temporarily, been resolved. Areas overgrown with weeds at the dump were bulldozed, while balloon vines growing at Tulo Valley have been eradicated. Balloon vines, says Wingate, “are easy to pull up, but there are so many of them.” Whereas the morning glory has just a few thick strands, all of the balloon vines are tough and substantial and every seedling has equal potential for growth and therefore for growing up into the canopy and out-shading the native trees. According to Pettit, “One approach to culling the large leaf balloon vine is to follow the trailing vines as close to the ground as possible, bunch and cut all leader vines within reach, and spray or paint the ground-side ends with a suitable systemic herbicide for broad leaf plants. The cut leaders will then dry and disintegrate over time or can be bundled up for disposal. The roots will be killed off by the applied herbicide, as well as any leader vines still attached to the root that were missed. This work should be done prior to the plant going to seed (January–March).”

Where the wild mimosa in gardens is concerned, if people want to keep it, then it’s important to cut all the pods before they burst, bag them and take them to the incinerator rather than the dump. Eradicating it is a better option. Wingate particularly recommends using a weed wrench to take out the single tap root of the mimosa. “It’s a gardening tool invented in the 1960s, excellent for the selective removal of unwanted invasives and it really saves your back,” he says.  Its clamp makes pulling the whole plant from the ground much easier.

Resources for maintaining our nature reserves have been overstretched and at present there are simply not enough volunteers. As Wingate says, “A few people are aware of the dangers of invasive plants but they are not enough.” But he is not without hope. “It took a four-man crew to remove invasives from Nonsuch. If we had five people working per acre of reserve land to cull invasives, we could control the problem.”