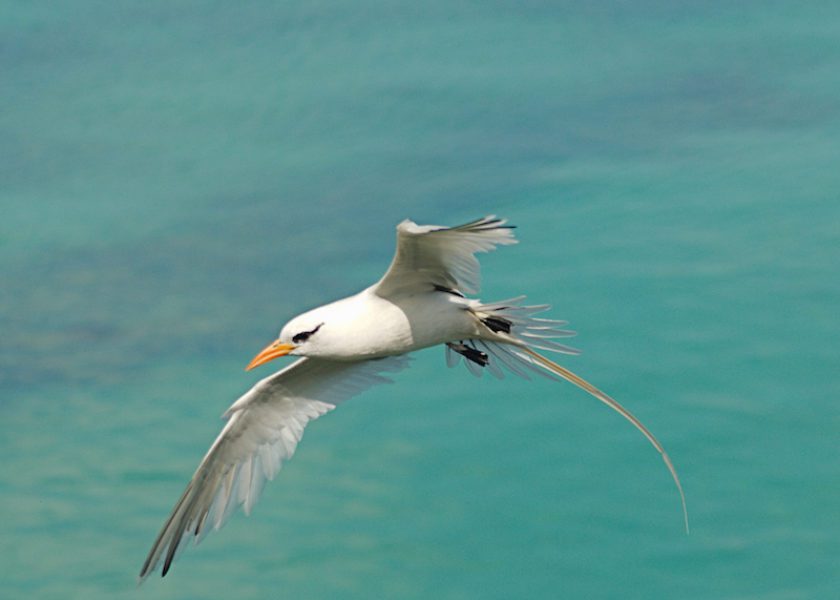 Each February, March, I feel a frisson of anxiety: What if the longtails don’t come back? How could we possibly enjoy our summers without them?

It’s a ridiculous worry, really. Every year these white-tailed tropic birds, with their distinctive forked tail feathers, black markings and yellow bills, are our reliable harbingers of spring. Back they come to nest in the natural crevices carved into our cliffs or into the artificial burrows the Bermuda Audubon Society has created for them. We see them summer long in courting, pairs swerving and tilting along the coastline, their wings constantly beating the breeze. Once their breeding season is over, they leave. And why not? They are pelagic birds, made for flying over or sleeping on the wing in the ocean. If they weren’t driven to reproduce, most likely they wouldn’t bother with land at all. So by October/November, they are gone and our winter sea skies seem empty, save for gulls, sanderlings and ruddy turnstones and other occasional visitors.

Where do the longtails go once they leave Bermuda? I asked senior conservation officer Jeremy Madeiros that question way back in 2007. He said it was thought they most likely fly south to the ocean north of South America and east of the Antilles. But no one was sure and he thought GPS would be used in the future to track them. In 2014 Madeiros’s prediction came true and Bermudian Miguel Mejías, now a PhD student at Memorial University in Newfoundland, joined a project to tag some longtails, taken from sites all over Bermuda, with light-based geolocators that would track their movements and their activities. The procedures and results became the subject of his MSc thesis.

Some of his findings can be seen in his article “Distribution and At-Sea Behavior of Bermudan White-tailed Tropicbirds during the Non-Breeding Season” co-written with Yolanda F. Wiersma, David Wingate and Jeremy Madeiros. In 2014, birds spent late summer near Bermuda and the British Virgin Islands; by mid-September, most went east to the Sargasso Sea. In 2015, most post-breeders flew east from Bermuda to the Sargasso before the end of late summer. For both years combined, fall and winter ranges extended as far west as North Carolina and as far east as the Mid-Atlantic Ridge. In both years all birds were between Bermuda and the Virgin Islands during the spring before flying north to us for their breeding season.

Why, I asked Mejías, would some longtails journey to Newfoundland and Greenland before flying south, while others from the start would stay relatively close to Bermuda?

“The Atlantic is like a desert,” he explained. Its resources (flying fish, for example, and puffer fish, which longtails like) are scattered so that the birds can wander over an extensive area to find food. Personality can affect where the birds choose to go. “Some are lazy. They just stay off Bermuda while others head for west of the Azores or go north.”

Times when the geolocators were dry and when wet revealed how much time the birds spent in flight and how much at rest on the water. The results show they spent more time flying during the daytime because that’s when they hunt for food. At night, explains Mejías, longtails risk predators. Once a whole longtail was discovered in a shark’s stomach.

Considering all the risks, maybe my worry is not so ridiculous after all. Constant building on our coasts has diminished the birds’ natural nesting places though artificial burrows have helped. Longtails in their first two years are particularly vulnerable from the moment they first fly from their burrows. As Madeiros explained in 2007, they have no flying practice—a successful first takeoff is crucial. It’s not surprising they suffer a high death rate in the first two years of life.

I should, though, be optimistic. In 2007, Madeiros said Bermuda had 2,000 nesting pairs and that you could “see more longtails in the sky here than in any other sky on earth.” This year, that’s even truer. Mejías says we have 3,500 nesting pairs. May their tribe increase!