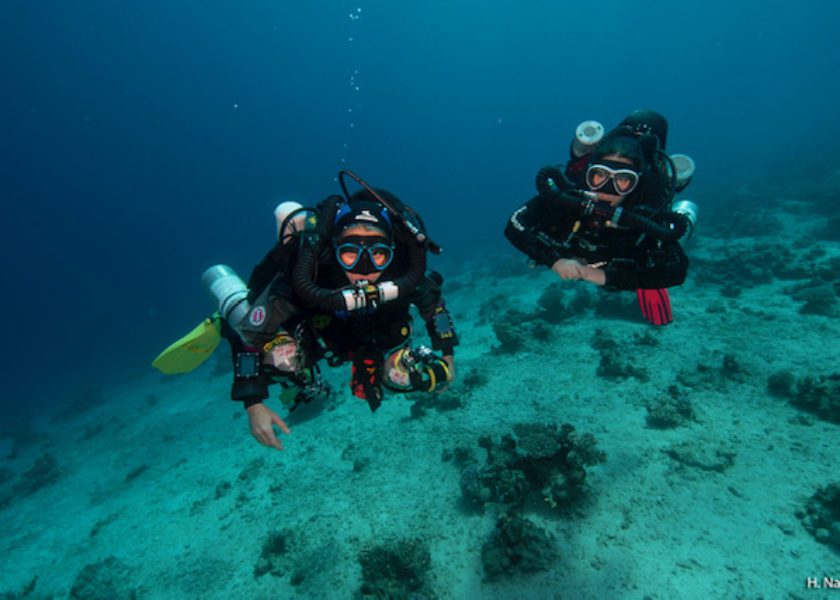 Marine biologists Gretchen Goodbody-Gringley (right) of BIOS and Tali Mass of the University of Haifa have designed a study that compares coral species living in the Sargasso Sea and the Red Sea, both located at northerly latitudes. As oceans change, their research furthers understanding of how corals will adapt, to predict impacts on reef community composition and the resilience of reef systems globally. Photo by H. Nativ

Making Links Between Bermuda and Israel: Scientists Compare Corals Living in the Sargasso Sea and the Red Sea

When marine biologists Gretchen Goodbody-Gringley and Tali Mass met at a science conference last June, they bonded over their shared interest in deep-water coral reef research and their specialized scuba diving skills. Both are technical divers, skilled at using equipment called rebreathers—which recycle every breath and incorporate a mix of oxygen, helium, and nitrogen gases—to access corals living at depths of about 100 to 500 feet (30 to 150 meters).

Within months, they had crafted a research plan and secured the funding needed to begin comparing corals in the Red Sea in Mass’s native Israel, to corals in the Sargasso Sea near Bermuda, where Goodbody-Gringley lives and conducts ongoing studies. Coincidentally, both marine areas are located at 32 degrees latitude, the northern-most point that reef building corals are found (some sites in the Pacific, such as Hawaii and Japan, are also at high latitude, Goodbody-Gringley said. For future research she would like to include a Pacific site for additional comparison).

Their focus is on learning about how corals have evolved—and continue evolve—to thrive in these environments, and how changing environmental conditions may further influence the skeletal forms of these organisms, an area of study known as morphology. Their work also looks at the genes expressed by the corals as they shift habitats, such as relocating to deeper waters with different light availability. As oceans change, scientists are looking at how corals will adapt in order to predict impacts on reef community composition and the resilience of reef systems globally.

On March 23, Goodbody-Gringley and BIOS research specialist Alex Chequer traveled to the port city of Haifa in northern Israel to meet Mass and four members of her research team. After organizing their dive gear, they drove south to the coastal town of Eilat on the Red Sea to establish their base out the Interuniversity Institute for Marine Sciences (IUI), an Israeli-government laboratory used by regional marine scientists.

Their days during the following two weeks of work quickly took on a familiar routine. Unlike deep-sea coral research in Bermuda, which requires boats for reaching depths off shore, at IUI they could simply don their heavy diving gear and walk off the beach. “There were no boats involved whatsoever,” Goodbody-Gringley said. “We would swim out and—boom—we would be in 45 meters of water. It was so cool.”

At IUI, they collected the larvae in situ, diving just before sunset and placing the collection nets on top of the coral. They went back the following morning to collect the larvae in a jar at the top of the net. Then they would switch the corals into alternate habitats, placing shallow water juvenile corals into deeper areas at about 150 feet (45 meters) depth, and the deeper juveniles into shallow habitats at 16 feet (5 meters) depth. They replicated their in situ studies with complimentary laboratory studies at IUI’s outdoor seawater facilities.

In her years of studying corals, including Bermuda’s great star coral for this research, she has noticed differences in the morphology across depth gradients. In July, per their research plan, Mass and her team of technical divers (including two doctoral students and a postdoctoral researcher) will come to Bermuda for two weeks using BIOS Grants-in-Aid funding support. Goodbody-Gringley is also writing a grant proposal for funding that would expand upon this work and enable a long-term collaboration with the Israeli research group to compare northerly reef locations.

Funding for Goodbody-Gringley’s research is Israel was provided by an ASSEMBLE Plus European Union Horizon 2020 research grant and from the Office of the Provost at the University of Haifa.