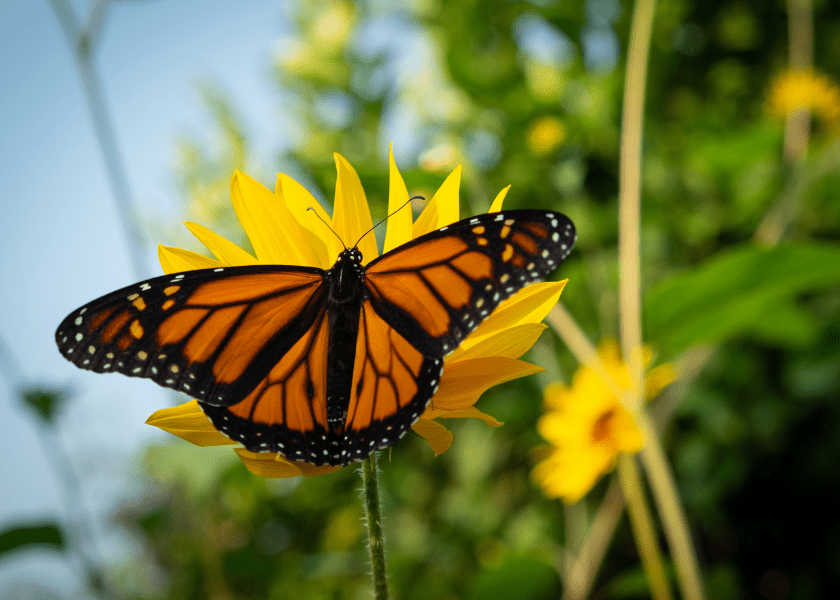 Among the most beautiful – and recognizable –species of butterfly, is the brilliantly-colored Monarch butterfly, Danaus plexippus. Deep orange with black borders and veins and white spots along the edges of their large wings, they were first reported in Bermuda in 1859. To learn more about Monarch butterflies and their life cycle and habitat in Bermuda, we sit down with Bermuda Zoological Educator Camilla Stringer.

Do monarch butterflies migrate to Bermuda?
Daniel J. Hilburn studied Bermuda’s Monarchs in 1989 and concluded not only that they are a non-migratory population, but that individual butterflies do not tend to stray very far from where they hatched.

Where do they come from?
I am not aware of any DNA studies to confirm their origin, but I think it is most likely that Monarchs could have been blown off course to Bermuda from the east-coast of the US.

Vagrant Monarch butterflies must have reached Bermuda from time to time, but without a food plant for the caterpillars they could not establish a population. They were first reported in 1859 wherever a patch of Asclepias sp. were found flowering, so milkweed and monarchs had probably become established sometime in the 18th century. A hundred years later they were so numerous that people referred to monarch as the “Bermuda Butterfly”. Other species of ‘vagrant’ butterflies have been recorded but have been unable to establish themselves on the island.

Are they here all year round or is there are specific ‘season’?
Monarchs are resident in Bermuda all year round and never leave. They are present in all life stages throughout the year although the population is greatest when the milkweed is growing fastest from June through to October.

Are there male and female monarchs? What is the difference?
While the caterpillars are genetically male or female, it is almost impossible to tell which is which. When they develop into butterflies there are differences which allow the sexes to be distinguished: Male monarchs have a black spot on each hind wing that the female does not. Females have thicker black ‘veins’ between the patches of orange on their wings. 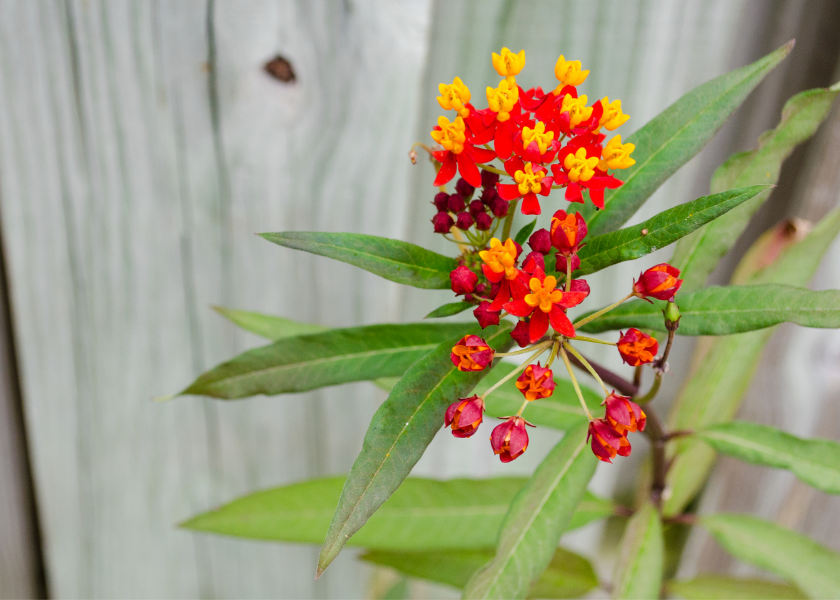 We know female monarchs lay their eggs on milkweed and that is the caterpillar’s only source of food. Do we have only the Tropical milkweed species in Bermuda?
Asclepias curassavica, commonly known as tropical milkweed is available in two varieties, one with a yellow flower and one with a red and yellow flower. These plants do not go dormant in winter, unlike other types of milkweed, allowing Bermuda’s monarchs to continue their life cycle year-round without the need to migrate.

Gomphocarpus physocarpa, previously known as Asclepias physocarpa and commonly known as golf-ball milkweed is native to South Africa.  It prefers a sandy well drained soil and can tolerate drought quite well.

Can anyone grow milkweed, and can you buy young plants at the nurseries here? What are the best conditions for growing it?
Anyone can grow milkweed. During the warmer months the seeds take only two weeks to germinate and grow quite rapidly. Brighton Nurseries, Aberfeldy and Bermuda Plant Nurseries all stock milkweed for sale throughout the year, but it sells out quickly, so it is wise to call first before making the journey. The BZS Junior Volunteers at the Bermuda Aquarium and Zoo also raise plants for sale at the BZS Shop (email senior.school@bzs for availability.)

Typically, how many eggs does the butterfly lay on the milkweed plant and do they all hatch?
A female monarch can lay up to 400 hundred eggs in her lifetime. Some will fail but only a few need to successfully reach adulthood and reproduce.

The competition for food can be intense and inevitably some caterpillars will starve. You can boost the chances of both plants and caterpillars surviving by removing some (most) of the eggs, thus preserving the food supply and increasing the chances of the remaining eggs making it to adulthood.

And what percentage of those caterpillars when hatched, will fully grow and become a butterfly?
I don’t have figures for this, but only a tiny fraction of the eggs laid need to make it to adulthood for the population to remain stable. 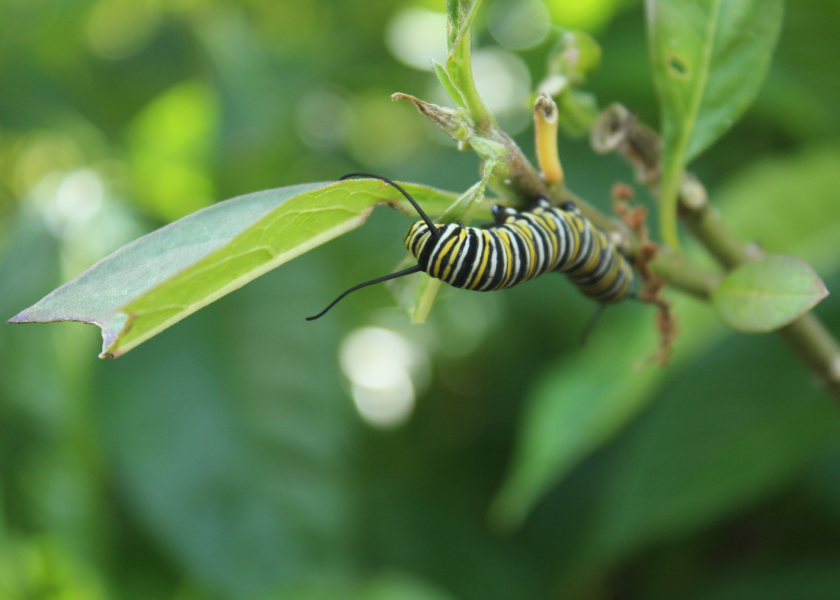 Often after the caterpillars hatch there are not enough leaves on my milkweed plant to sustain all of them. What becomes of the ones that don’t fully grow if there are no leaves left for them to eat?
The shortage of milkweed means that many will die of starvation. Others may fall prey to lizards and toads. Most birds will steer clear of eating monarchs because the caterpillars take on toxins (cardiac glycosides ) present in the milkweed they feed on and these toxins are transferred into the butterfly wings and exoskeleton during metamorphosis. These heart poisons can make birds vomit and subsequently avoid eating them.

In the USA monarch butterfly populations have dropped 80 percent in the past 20 years.

Is the same true of Bermuda?
Bermuda’s population of monarchs is greatly reduced from its heyday in the 19th century, but no figures are available. However, we do have figures which show that the number of people in Bermuda has greatly increased since that time requiring more and more housing, more roadways and drastically reducing open areas where milkweed previously grew. In addition, the 1,400 hectares of agricultural land at the turn of the century has dwindled to only 300 in 2018 (World Bank data), which represents less than 6 % of the land mass. The resulting loss of appropriate butterfly habitat can only result in a declining population unless action is taken.

Is the monarch here also moving toward extinction? If so, what is their biggest threat specific to Bermuda?
The biggest threat to the monarch population in Bermuda is lack of milkweed. The pastures where it once flourished are long gone, and in recent years I have seen no milkweed plants outside cultivated areas. To compensate for lack of wild plants, it would be wonderful if more people planted this pretty plant in their gardens.

The population numbers are determined by the amount of food available. If the amount of milkweed in Bermuda continues to decline, then the numbers of Monarchs will be similarly affected. It may reach a point when the population crashes completely.

What’s the one thing we can encourage everyone in Bermuda to do, to protect these beautiful creatures for future generations to experience and enjoy?
Providing host plants and food plants is the best thing we can do to help.   Milkweed plants need relatively little care and have beautiful flowers. Although it may not look too pretty after its leaves have been eaten by caterpillars they regenerate quickly. One or two plants will quickly be stripped as each caterpillar needs to eat at least 20 large milkweed leaves to metamorphosize successfully. In order for your milkweed to thrive it is best to have groups of milkweed plants in different locations in your garden. They can be grown in pots or in flower borders.

It usually takes a while for Monarchs to find a new patch of milkweed, which should allow your plants to get established. Milkweed are perennials, meaning that in the right situations, they can live for several years. Milkweed grows quickly, and after flowering, produces pods filled with many seeds, each with their own parachute. Gathering the seeds and planting them in seed trays will give the young plants a head-start.

Please remember that milkweed plants contain toxins which people can also find irritating. It is advisable to wash your hands after handling them.

In addition to caterpillar food plants, the adult monarch, the butterflies, need nectar giving plants to sustain them. Pentas, goldenrod and verbena will all attract butterflies. Check out your garden center for more ideas. Planting natives and endemics in your garden will help all the native fauna too!