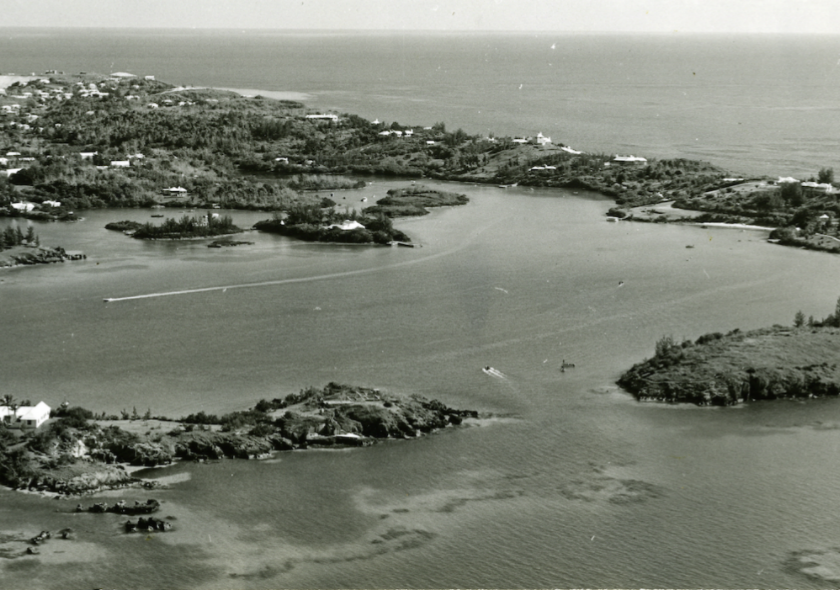 Morgan’s Island is a sentinel to Ely’s Harbour, an idyllic calm cove used for mooring pleasure boats. This picturesque little island is owned by the Bermuda National Trust, and has come in to the limelight recently as one of two reintroduction sites for the rediscovered Bermuda land snail.

As a Bermuda National Trust publication puts it, “Ely’s Harbour was probably Bermuda’s foremost port of entry for contraband goods.” The bay was well known to launch crews to save passengers that had wrecked on Bermuda’s shores, and pilfer whatever salvaged riches they could from the sunken boats. Some even believe that lights were placed on Somerset shores to lure boats to their doom, but there is no evidence to support this claim.

Morgan’s Island has never had structures built upon it, but it is well forested and has a beautiful beach on its south side. Bermuda’s smaller islets provide a pristine haven away from the mainland, not just for those lucky enough to build estates there, but for a variety of plant and animal species.

Nonsuch Island is a good example of an island being used for conservation. Safely isolated from the mainland, Nonsuch was converted by Dr. David Wingate into a living museum, populated with species from pre-colonial Bermuda. Here, species such as the Bermuda skink, and one of the rarest birds in the world, the cahow, can still thrive, far away from the introduced species that threaten them.

The milk snail, or as it is sometimes known, the edible snail, was introduced as a food item to Bermuda. We’re not sure who’s idea that was, and we don’t think any Bermudians really took to the escargot!

Recipes for the milk snail would likely begin by “desliming” them and sanitizing them from their free-range lifestyle – ick! The bodies of molluscs are generally very tough, so they must be cooked for hours to reach a desirable texture.

The rosy wolf snail was introduced as a biological mechanism to control milk snail populations. But, the wolf snail didn’t like them much either – they preferred to feast on a diet of delicate endemic Bermuda land snails, including Poecilozonites bermudensis.

The last time the greater Bermuda land snail was seen was in 1970, when PhD scientist Stephen Gould was doing research on them. Suddenly, the snails seemed to experience a steep population decline, and Gould recorded that they were probably extinct due to introduced snail predators.

Miraculously, biology teacher Bruce Lines discovered a small colony of the snails in an area in Hamilton in 2014. Apparently, the concrete city that had sprung up around these snails had isolated them from the threat of wolf snail predation. Lines was one of about five people on island who would have recognised the thought-to-be-extinct snail, as his son Alex Lines was heavily involved in conservation of a related snail, Poecilozonites circumfirmatus.

After the discovery, a breeding population of the snails was established at Chester Zoo. Only this year have the snails been reintroduced into select locations in Bermuda, returning the iconic endemic to its rightful stomping grounds.

Nonsuch Island took 4,000 of the snails in February, and a collection of the snails was released on Morgan’s Island in the summer. Morgan’s Island is not a dedicated nature reserve like Nonsuch, but it is thought to be free of the carnivorous introduced snails that threatened our endemic land snail, and visiting on the island is only allowed by invitation of the National Trust.

It is unlikely that Bermudians will see any of the snails on the mainland, but the breeding program is always looking for new individuals to increase genetic diversity in the Bermudian snails. Be on the look out for this cute little snail, which carries its shell flat on its back rather than upright, as the milk snail does.