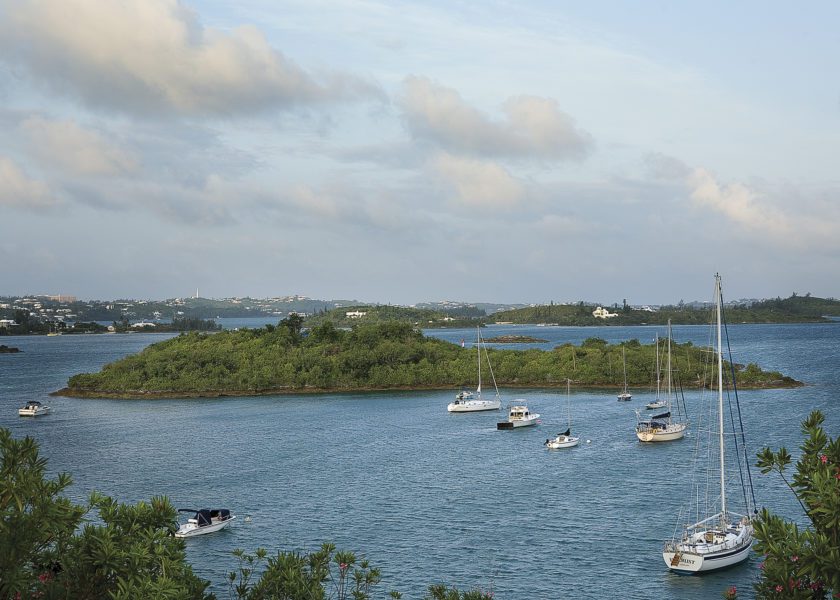 This article was taken from our archives. It first appeared in the Fall 2006 issue of The Bermudian. It appears here exactly as it did originally.

Saltus Island comprises 3.19 acres in Soncy Bay, a body of water in Hamilton Harbour. The island is impressive not only for its historic connections but also for a contemporary Bermuda National Trust project to raise environmental awareness in students by introducing native and endemic plants to the property.

Saltus Island originally belonged to Richard Norwood, the noted surveyor who completed the first map of Bermuda. The property passed to Samuel Saltus on the death of Norwood’s daughter. (Samuel Saltus was a merchant, a ship owner and a member of the colonial parliament. On his death, he left £12,800 to found a school for boys in Pembroke, Saltus Grammar School.)

The island remained nameless throughout the mid-nineteenth century until Savage’s survey labelled it Saltus’s Island, presumably after its owner. In 1819, Saltus Island seemed destined to become a hospital, a proposition vainly floated by Dr. Theodore Gilbert, one of the first doctors to realise that the illnesses of that time were brought to the island by seamen on foreign ships.

Richard Aeschliman donated the property to the Bermuda National Trust in 1978, but Saltus Island sat overgrown until the Trust asked Saltus Senior School to become involved in a project to clear the property and replant it with endemic and native species. The idea was to reproduce how Bermuda looked before it was settled.

Perhaps because of the common name and history, the school agreed, and in February 2002 Saltus students began the project, introducing button wood, bay grape, palmetto, Bermudiana and Bermuda cedar and removing the invasives: Australian casuarinas, Mexican pepper, allspice, sage, sisal and oleander. The project was so successful that the Ministry of the Environment awarded a $6,000 grant for its continuation, part of an initiative that recognised environmental programmes with strong educational content.

“The Saltus Island project is a woodland-management scheme and environmental-education initiative, first established in 2002 in conjunction with the Bermuda National Trust,” explains Duncan Ashworth, head of geography at Saltus. “The flora of the 3.2-acre island in Hamilton Harbour was becoming dominated by fast-growing introduced species. The project aims to manage the woodland on the island, controlling the invasive species and planting native and endemic plants. Senior 9 students [age 13] from Saltus Grammar School visit the island twice per month. The students are taught the significance of the project and also work to remove the invasive species, create paths, plant native and endemic species, compost, clear garbage, etc.”

According to the school website, “Saltus Grammar School in partnership with the Bermuda National Trust aims to protect Saltus Island as a nature reserve and undeveloped open space, forming part of the natural landscape of this part of Hamilton Harbour. Our objectives are to maintain the island with limited interference as a natural habitat and as a preserve for bird life and to manage the natural habitat and encourage the growth of native and endemic species. To do this, a programme of selective conservation work will be carried out to cull out invasive species to ensure that the island does not become fully infiltrated by casuarina and Brazilian pepper to the detriment of all other species.”