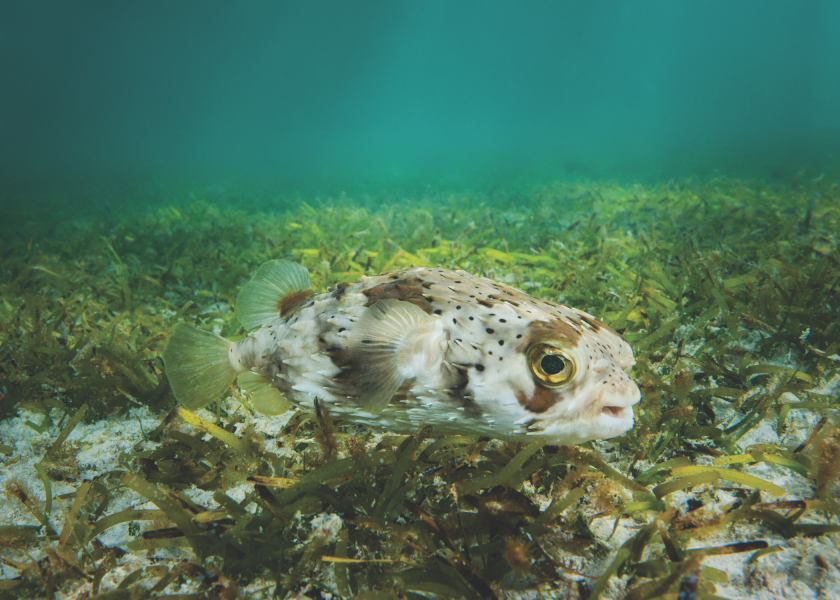 In Bermuda, seagrass is best known as the dish of choice for green sea turtles. Less well known, however, is the essential role it plays within our whole ocean eco-system. It provides protection and food for a variety of juvenile sea creatures and other organisms. It acts as a carbon sink. It holds sediment in place. And, it is known to protect adjacent corals from disease. But in the last two decades, Bermuda’s seagrass beds have collapsed and without them, the quality of our water and quantity of sea life will dramatically decline.

Bermuda isn’t alone in this plight. Seagrass meadows globally are in freefall. According to 2018 Science article “A Call for Seagrass Protection” by Leanne C. Cullen-Unsworth and Richard Unsworth, we have lost an estimated seven percent a year since 1990. They attribute this mainly to poor coastal water quality and coastal development. In Bermuda, intense grazing by our green turtles adds to the man-made reasons for seagrass decline.

Initiated in 2020, the seagrass restoration project, headed by senior marine conservation officer Dr Sarah Manuel, hopes to reverse this trend. They have created a seagrass sanctuary at The Lagoon at Ireland Island in Sandys by fencing off the area, using grates at the entry points. These prevent turtles from getting in to graze, without restricting the flow of water or fish. Elsewhere, they have created seagrass restoration areas by placing large mesh cages over areas of struggling seagrass habitat. The idea is to stop turtles from eating too much seagrass in the hope that it will have enough time to grow back, flower and produce seeds which will, in turn, create even more seagrass. Once it is long enough to stick out of the top of these cages, the turtles can tuck in without destroying the bed.

Over the last year, the project has expanded considerably, thanks to additional support from private and commercial individuals and entities via a collaboration with UK-based organisation Climate Wise. There are now a total of 22 caged restoration sites. Four are offshore and 18 inshore. While it is still very early days, initial results are encouraging.

In November 2021, the Marine Conservation Section re-surveyed The Lagoon and found that while the seagrass was still a long way from the dense meadow it was in 2017, the grass had grown and developed into much denser patches compared to the previous year. The Lagoon is home to manatee and shoal grass, both of which are faster growing than turtle grass.

For the sections under the cages, Dr Manuel explains that “some areas are recovering more quickly than others, but this is not unexpected because seagrasses, particularly turtle grass, are slow growing and can take five years or longer to fully recover.”

Success is also measured against the condition the now-protected beds were in before the cages were placed over the top of them. “The seagrass habitat at some of the restoration areas was severely degraded,” she continues. “The turtle grass leaves were very narrow and had been grazed to less than a centimetre long. These areas are likely to take much longer to regenerate.” Trunk island, she says is “doing extraordinarily well.” She attributes this to the blades being “quite wide.” Other successful areas are north of Riddell’s Bay as well as around Paradise Lake and Hawkins Island. Bailey’s Bay, however, is doing less well. “When we put cages there, I think it was too late. We’ve seen very little recovery. We’ve got to have a lot of patience.” The seagrass at Bailey’s Bay is the slow-growing turtle grass and there were only one or two shoots left. Interestingly, she adds that in some areas “the seagrass is recovering equally well inside and outside the seagrass restoration cages.” Is this because there are fewer turtles around to eat it?

Due to successful conservation efforts on some of the nesting beaches to our south the numbers of turtles around Bermuda had actually been going up until around three years ago. This was good. What wasn’t good, however, was the other reason for the increase in turtle numbers—the dramatic decrease in their only natural predator, sharks. This situation has created an imbalanced marine ecosystem. “We need to protect our predators,” says Dr Manuel. “You’re getting lots of turtles going into the Atlantic, fewer predators to eat them on their way to their destinations.” The lack of predators has also impacted the length of time a turtle spends grazing on a seagrass bed. Without their predators lurking, they will stay and graze for longer, putting further stress on that bed.

While there may be more turtles going into the Atlantic from their southern nesting beaches, if there is no food for them to eat by the time they make their way up to Bermuda, they cannot survive here. The turtle numbers, therefore, have not only declined again, but the ones that are found in Bermuda are severely underweight. Turtles get a lot of blame for the condition of seagrass beds in Bermuda, but is this fair? As with most environmental issues, the answer is no; it is not the animal to blame, it is we humans. “Human activity has had a huge role in the decline of our inshore seagrass beds,” explains Dr Manuel. “We like to moor our boats in sheltered shallow bays, which is where the seagrass does best. Our traditional moorings have chains which drag and scour the seabed, removing seagrass as the boats swing with the wind and current.” Docks, marinas, dredging and land reclamation have also had a huge impact on seagrass beds, as well as careless boating such as anchoring or accidental groundings in the beds or propellor damage.

On a more global scale, the lack of natural turtle predators is also a man-made imbalance due to the over-fishing of sharks. To this end, the Bermuda government announced amendments to Fisheries legislation in March, which provided protection for all species of shark except the galapagos, smooth dogfish and sixgill sharks. Only commercial fishermen will be allowed to take the exempted species, however, and they will need a special license to do so. While this may only be a proverbial “drop in the ocean” given the global scale of the problem, “it’s definitely a start in the right direction,” says Dr Manuel.

The effects of global climate change are also having a negative impact on seagrass, in particular sea level rise. “Turtle grass, at the moment, here in Bermuda, only grows to about 30 feet water depth,” she explains. “With sea level rise, the water is going to get deeper on our deeper beds, seagrass will get less light and it won’t be able to survive so it’s going to need to move to shallower waters.”

Nearly two years in, initial signs show that the seagrass restoration project is working, but there is a long way to go before it can be considered restored. A scientific paper by Murdoch et al published in 2007 estimated that in 1997 there was approximately 2,100 hectares of seagrass on the Bermuda platform, but by 2004 this had decreased to 1,625 hectares. Today, there is even less seagrass, and in some areas it has disappeared completely. Currently the restoration projects’ cages cover around 2000 metres squared of seagrass habitat. This equates to 0.2 hectares or 0.01 percent of the seagrass area growing on the Bermuda platform in 2004. “A tiny area in comparison to what we used to have,” says Dr Manuel. It may be tiny, but it’s a start and the impact of its continued success could be huge. “I think people do not realise how important seagrass is,” she says. “It helps regulate water quality. We need it there to hold sand in place. Our fish and lobsters need the seagrass.”

“They [seagrasses] are a carbon sink. For our reefs to stay healthy, they need the seagrass there to absorb nutrients. Where seagrass grows right up close to a coral reef, those reefs have less coral disease than areas without seagrass. They’ve also found that where seagrass grows close to coral reefs, they provide a buffering action against ocean acidification in that localised area.”

Ultimately, for seagrass to come back and survive, we must stop all the human impacts to its habitat. Or, as they say on land, “Keep off the grass!”

To learn more about the importance of seagrass and how it can be used to fight the climate emergency, take a look at the below video: