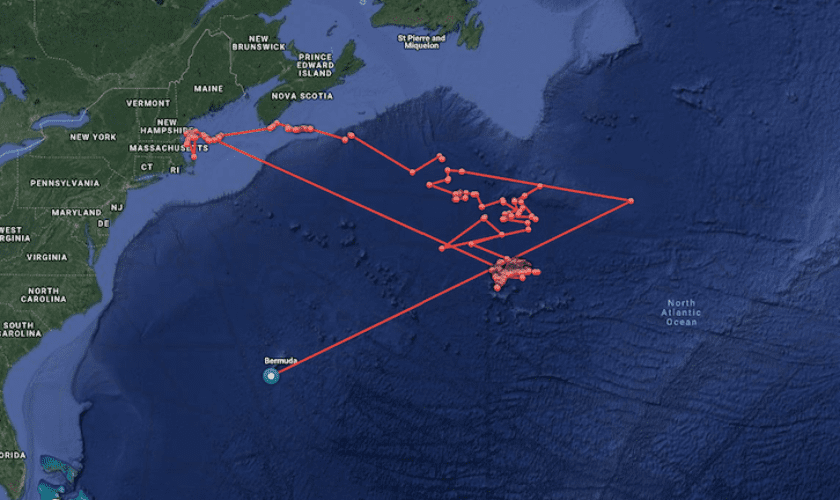 The waters around Bermuda are teeming with sharks. We forget about them because they seldom travel within the reef line, but occasionally a few little ones will venture through. In July 2014, two snorkelers spotted a four foot long reef shark off John Smith’s. In April 2018, paddle boarders spotted a six foot long hammerhead in Flatts Inlet. But much larger predators lurk just outside the reef line; thousand pound tiger sharks, two thousand pound great whites.

Right now, shark Thomas is paying us a visit. The blue shark is travelling to our shores for the first time, after spending 2016 cruising the east coast, and 2017 in the Sargasso Sea. OCEARCH provides a comprehensive global shark tracker for all their tagged sharks – from hammerhead sharks to whale sharks.

Each time the shark’s fin, which holds the tracker, breaks the surface, its sends a ping to a satellite overhead. These pings are tracked and summarized to show various data points of the shark’s movements.

In reality, apex predators are necessary for any ecosystem to be sustainable. They act to keep populations of smaller animals under control, and when they disappear, the whole system can crumble. Because apex predators often have such a large range, killing just one shark can affect entire reef systems.

Projects like OCEARCH are invaluable because they involve the public in scientific research in order to raise awareness about shark conservation. At any time, Bermudians can consult the online tracking database to see what our waters are holding. Of course, the system only accounts for sharks that have been tagged, and furthermore, sharks that break the surface with a fin. It’s likely that at any given time there are hundreds of sharks surrounding our waters, and hopefully that number keeps rising.