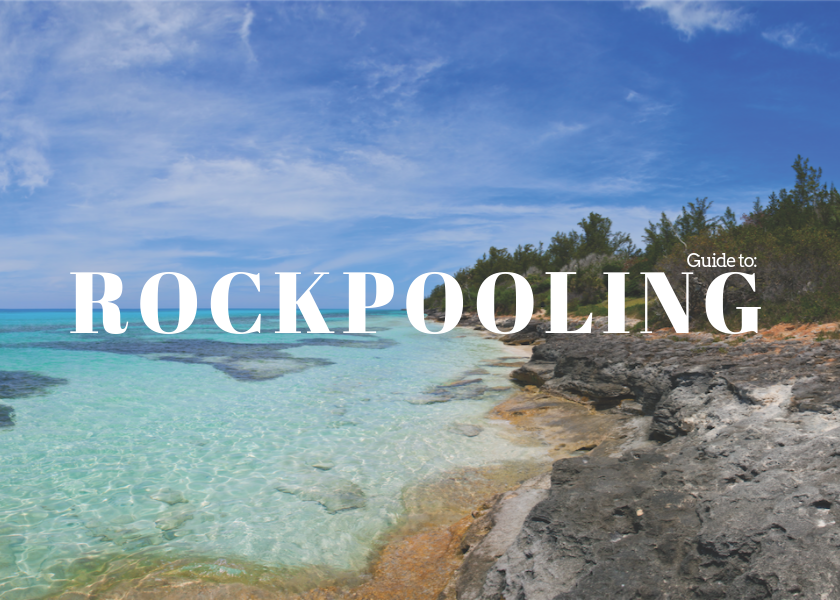 Shrimps, Swimming Crabs, and Suck Rocks: A Guide to Rockpooling in Bermuda

Take yourself down to the beach and catch a glimpse of the organisms on the shore with unique adaptations. The animals living here have to deal with one of the most dramatic changes of any habitat: the rise and fall of the tides, which sometimes submerge the coast and sometimes leave it bone dry.

What to Bring
A bucket or small transparent tub to view your finds more easily.
A small net to catch fish and shrimp – be careful not to damage the rockpool ecosystem with your net, though. Pick up slower moving animals with your hands.
A magnifying glass to look closer at very small creatures.
A camera to capture your finds.
Sturdy footwear. Rocks are sharp! Wear shoes that can get wet and won’t slip.
Sun protection, like sunglasses, sun block, a cap, and a UV shirt.

Where to Go
There are many wonderful rockpooling locations in Bermuda if you know where to look! Walking along a sandy beach probably won’t bring you much luck, but hunting at the edge of the beach, where it gets rocky, will prove to be more fruitful.

Sheltered bays are best. Some of the best rockpooling locations are Shelly Bay, Gibbet’s Bay, Devonshire Bay, and Blue Hole Park. When we talk about rockpooling, we mean the isolated wells in the rocks that are sometimes filled with sea spray, but also the rocks near the shore that can often be overturned to find small invertebrates.

When to Go
Low tide is always the most fruitful time for rockpooling. The biggest danger to these versatile animals is the threat of drying out, so look in the moist and cool places.

Peer into pools of water here, dig in the sand, or overturn rocks, and you’ll find a myriad of little creatures. At low tide, you’ll be able to walk farther out than you normally would be able to.

Things You Can See
You’ll be able to see two species of hermit crabs commonly – the tricolour and the verril’s varieties. These are both tiny creatures, only growing up to 2cm large. The tricolour hermit crab is more common, with leg segments coloured blue and orange. The endemic verill’s hermit crab is bright purple with yellow spots.

Land hermit crabs are now rare in Bermuda, but you may see them high up past the high tide line, especially at Devonshire Bay or the Hungry Bay nature reserve. These are very large crabs, often sporting a disused West Indian Top Shell shell. They come to the water’s edge to release eggs, or exchange shells at certain times of year in the evening.

Other larger crabs include the skittish and bulky land crab, and the flattened and mottled orange, brown, or grey sally lightfoot crab.

Glass shrimp (4.5 cm) are common in tide pools – they are completely transparent except for pale brown lines running across them like tiger stripes. When you see one, you’ll usually soon see more – they are a schooling shrimp. Just look closely to make sure you don’t miss them!

Other great crabs you might see on the shore are the common spider crab (2.2 cm), bright orange and hard to miss, the decorator crab (4.9 cm), with an arrow shaped head and covered in marine camoflauge, and the ornate swimming crab (12 cm) – a large white crab that buries itself in the sand with specialised blue back paddles.

The fireworm is one animal you want to avoid handling – this is a bright orange worm fringed by white bristles. The bristles are designed to discourage predation, and if you pick one up, they can become lodged in your skin and cause a rash.

Another worm common in tidal areas is the spaghetti worm – you’ll only see its very long, very thin, pale tentacles. Its stripy body is hidden under the sand, only it’s bright red gills protrude. The tentacles can be retracted when the worm finds a bit of food to reel into its mouth.

Molluscs abound on the rocky shore. The largest of these is the West Indian Top Shell. These snails are making a come back after their populations were greatly decreased by human consumption. They have cream coloured shells with black spots. If you coat your hand in sea water, the snail might suck on to your hand and come out.

Chitons or ‘suck rocks’ are common, and so are limpets. The bleeding tooth nerite looks like a miniature version of the West Indian Top Shell, but they are separate species. The periwinkle is a common high shore inhabitant, in a drab grey shell.

The purple sea urchin and anemones are commonly found in rocky shore zones. Sea puddings, black or brown with black spots in colour, are also common.

The few fish you will see include juvenile sergeant majors, the molly miller blenny, and the notchtongue goby.

Take Only Photos, Leave Only Footprints
It’s very important that you don’t damage the delicate rock pool ecosystem, or disrupt the lives of the animals you are looking at.

Animals are heavily zoned in rock pools – certain animals are found farther away from the shore than others. It’s vital that you put an animal back exactly where you found it, so that it doesn’t dry out. Some snails create a tight seal against the rock to trap water inside their shells, so do not force snails off of the rocks.

Make sure to replace any stones you turned over by putting them back the way they were, so that critters stuck to the bottom don’t get baked by the sun.

Never remove rocky shoreline creatures from their habitats and take them home. It’s interesting to look at them in an isolated tank for a while, but make sure you don’t leave them in there for too long and risk their health.

Beach Combing
While moving along the rocky shore, you might find some interesting things that you are allowed to take home with you! Make sure you never take anything living, and don’t take excessive amounts of shells or seaglass because removing too much of one thing can damage the ecosystem.

When rockpooling, you might come across exciting finds like crab carapaces, shells such as the the sunrise tellin, seaglass blunted by the ocean waves, and ornate mermaid’s purses – the dried case of shark’s eggs.