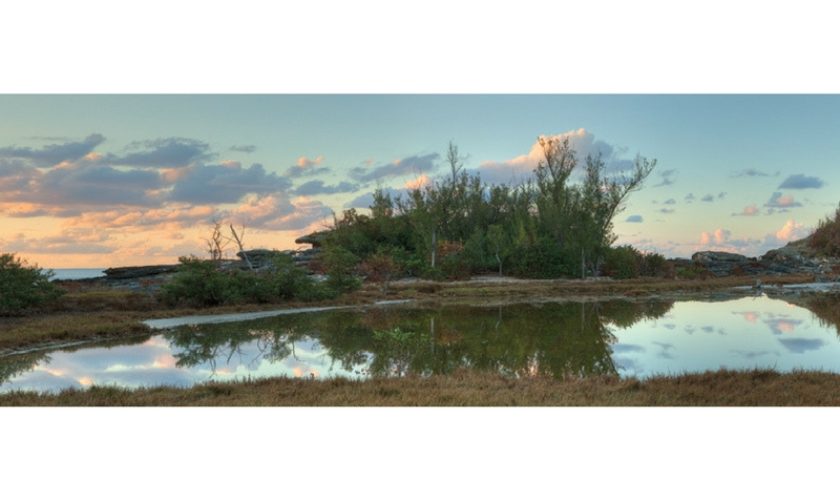 Look at any contemporary map of Bermuda and you can see that the Spittal Pond Nature Reserve is a reassuringly large green blob. That’s because it’s legally protected green space jointly owned by the Bermuda Government and the Bermuda National Trust. But this was not always so. In Euphemia Bell’s Beautiful Bermuda map of 1929, for example, Spencer’s Point, Spittal Pond, Spanish Rock and North’s Point are all marked (as indeed they are on today’s map), but they exist as privately owned separate entities. There’s no indication that they could be part of a park. Indeed, not one park is marked on her map because none existed.

Yet appropriately, the whole of Bermuda’s land on Bell’s map is coloured green. Eminent conservationist Dr. David Wingate has the explanation for this. In Held in Trust, published by the Bermuda National Trust in 2008, he writes, “When I was growing up in the 1940s, the whole of Bermuda was like one big national park with the people living in it so it is hardly surprising there were no formally established parks or reserves before the 1950s.”
Of course, with increasing economic growth from the 1960s onward, the island no longer resembles a huge park. Much of what was once farmland has been consumed by hotel and housing expansion, so that active conservation has become more and more crucial and our parks particularly precious. Spittal Pond is arguably the most popular.

According to Held in Trust, Spittal Pond originally consisted of 10 strips (north to south) of privately owned land. So how did they escape development? One reason was that part of the land contained one of Bermuda’s few salt marshes, which made it unsuitable for development. But Spittal Pond’s transition into a fully recognised nature reserve starts back in 1946 when Dr. Henry Wilkinson, medical doctor and historian, bought the first segment. In fact, he was also a conservationist, being the founder of the Bermuda Historical Monuments Trust. So his generosity in 1973 is not so surprising; that was the year he conveyed his eastern 4.2 acres to the recently formed Bermuda National Trust. Now they are part of the Trust’s near 24-acre Spittal Pond Bird Sanctuary.

In 1956, the Bermuda Government bought the North’s Point headland for a national park and subsequently bought additional land as it became available. On the western end, it leased some of the land to a dairy farmer. The first deliberately created nature trail appeared in 1966 to provide a balance between allowing the public a view of the whole pond and restricting entrance to protected areas. It wasn’t until 1986, however, that Spittal Pond became legally protected under the National Parks Act like other parks and reserves on the island. Consisting of 64 acres jointly owned by Government and the Trust, Spittal Pond is now Bermuda’s largest nature reserve and wildlife sanctuary. One trail, rocky and steep in some places, hugs the ponds on one side and the coastline on the other, while a second twists through woodland on the northern perimeter.

What makes this stretch of land so loved by countless Bermuda residents? Of course, for families, it’s a scenic place to go for a reasonably lengthy ramble with children and dogs, and a favourite venue for fishing off the coastline as well. Everybody, including flora and fauna, relishes the diverse range of habitats at Spittal Pond: a dramatic coastline, constantly hammered by magnificent seas, seasonal mudflats, brackish and freshwater ponds, a dairy farm visited by cattle egrets, mangrove swamps and a spillover salt marsh flooded by the sea during storms, as well as extensive areas of woodland.

It’s this diversity of habitat that makes Spittal Pond the bird-watching jewel of the island. According to Wingate, “Twenty bird species regularly winter at Spittal Pond while a total of 200 species have been recorded as visitors there.” In 1999 the pond was designated a Ramsar site because it is “Bermuda’s most important wetland for wintering waterfowl.”

Andrew Dobson, president of the Bermuda Audubon Society and author of A Birdwatching Guide to Bermuda, explains that on the pond itself “mallards and common moorhens regularly breed and yellow-crowned night-herons and green herons have recently bred.” During the year, accidental tourists, such as avocets, black-necked stilts and northern pintails, may also drop by, while all sorts of waders, herons (including great blue, green and tricoloured) and ducks are regular visitors to the ponds. Egrets are commonly seen roosting on trees by the pond or on its shoreline, while sandpipers of different varieties like to come here as well. Every spring the longtails, or white-tailed tropic birds, return to their rocky burrows on the coast and can be seen swooping gracefully in and out of the cliffs. From spring to summer, shearwaters can be seen offshore on their northern migration. Woodland areas are home to great kiskadees, European gold finches, common ground and mourning doves, white-eyed vireos and northern cardinals. But again visitors abound and include many kinds of warblers, swallows, swifts, hawks and belted kingfishers.

Spittal Pond is also a major attraction for those who may not be particularly interested in birds but who appreciate its variety of trees, shrubs and wildflowers. Overall, the reserve wears green, but after a severe storm such as Hurricane Igor in September 2010, the salt wind can burn the trees to autumnal bronze. Bermuda’s own palmetto is plentiful here as are bay grapes, whose round hardy leaves are resistant to salt and turn red as they age.
On the eastern end, pittosporum trees dot the grassy slope, as do Bermuda olivewoods. Casuarinas, planted to replace the endemic cedars decimated in the 1946 cedar blight, are now also abundant, although hurricanes often uproot them. (Since Hurricane Fabian wreaked havoc in 2003, cedars and palmetto have replaced many invasive species.) Added to the mix are spice trees and the invasive fiddlewood and Brazilian or Mexican pepper on the woodland trail.

Shrubs include the ubiquitous lantana, spiky Spanish bayonet and fluorescent green flopper, which does indeed flop. As for wildflowers, Jamaican wireweed, a pest to farmers but aesthetically pleasing because of its tiny pale apricot flowers, is prevalent, as is rouge plant, a clever little shrub that manages to produce small white flowers and bright red berries all at the same time. Goldenrod, sea ox-eye and occasionally seaside evening primrose are additional species. Tangles of nasturtiums and morning glory offer a blaze of colour from spring through summer, while widgeon grass flourishes in the pond and marshland. Expanses of milkweed, particularly on the western end, support resident monarch butterflies.

The limestone formations are dramatic, especially against the blue backdrop of sky and sea and white-crested waves, and for geologists they act as a kind of code. Embedded within them are fossilised palmetto stumps and fronds, ghostly reminders of Bermuda’s original forests.

Chequerboard (sometimes spelled Checkerboard), on the western end, is of particular interest to geologists as well. It can be reached on the right (going west to east) just before the gate to the sanctuary. Hidden by limestone rocks whose slatelike layers resemble millefeuille pastry, it’s a flat rocky floor, scored into distinct squares and surrounded by dramatic limestone crags overlooking the South Shore. It would make a wonderful stage setting. But to be practical, Held in Trust tells us it “effectively provides a record of sea level recession from the time of the last interglacial high sea stand around 120,000 years ago.” Apparently, during the eighteenth century the platform was the location used to strip whales of their blubber after they had been hauled to shore. Even on calm days, waves come crashing in, so it’s difficult to imagine how whalers managed this feat.

Jeffrey’s Hole, a cave formation, might also interest geologists, while those intrigued by Bermudian history will learn that according to local lore, it is named after an escaped slave who once hid there for several weeks. Sadly, he was caught and what happened to him after that nobody knows.

Another historically significant rock nearby has undergone a name change as part of Bermuda’s 400th anniversary celebrations. Once called Spanish Rock and transferred to the National Trust by the Government in 1976, it carries the initials of a sailor and the date 1543. These initials were once thought to be TFC, attributed to the sailor Theodore Fernando Camelo. (In 1829, English visitor Susette Harriet Lloyd went in search of what she calls “these Spanish inscriptions.” But as she rather plaintively recounts in her Sketches of Bermuda, she was unable to find them. “We were directed to the vicinity of a small bay, on the south coast, defended by an old rusty cannon. Beating about prickly pear and sage bushes, climbing over piles of rocks, and opening paths where I suppose no European had been since the days of the Spaniards, we were obliged to give up the search.”)

However, more recent research suggests the initials stand for Rex Portugalis (King of Portugal) and were carved by a marooned Portuguese sailor watching out for a ship from the cliff top. Perhaps he intended to claim Bermuda for Portugal. And so the new name, Portuguese Rock. In any case, the initials are the earliest physical evidence of human presence on the island. Whatever the name, the rock offers just as good a vantage point as it did in 1543 for watching the shearwaters and the humpbacked whales on their spring northern migrations.

Why “Spittal” Pond?
Spittal Pond has had other names in the past: Brackish Pond, for obvious reasons, and Peniston’s Pond, named after the Peniston family who owned it and surrounding property. Stark’s Illustrated Bermuda Guide 1890 refers to it as Peniston’s Pond and says that in the centre of the southern shore “within a few paces of the water are wells used for the purpose of watering cattle.” By 1911, William Hayward calls it Spittal Pond in his Bermuda Past and Present. The name could be an abbreviation of “hospital,” since apparently it was used as a hospital for sick animals and as grazing grounds for cattle.