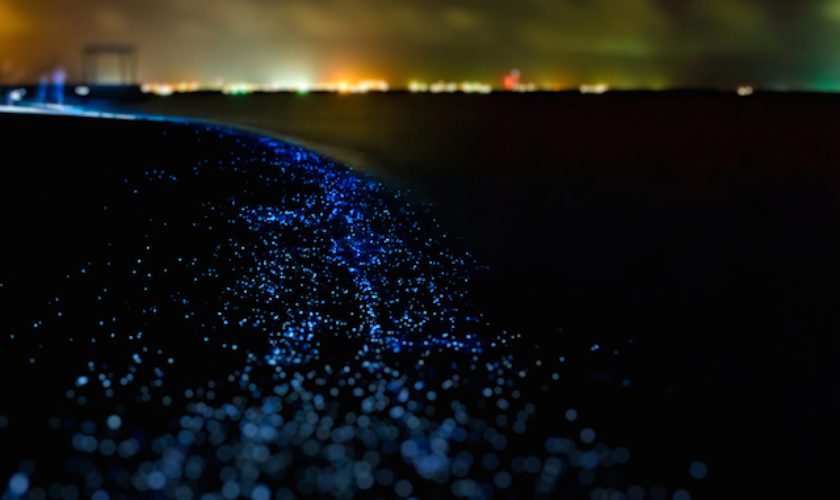 Swim in Bioluminescence this Summer

Missed out on the glow worms? Don’t worry, you can see amazing bioluminescence in Bermuda’s waters any evening this summer.

An evening swim in Bermuda wouldn’t be complete without glittering bioluminescent algae. At nighttime in the warmer months, the algae settle at the surface in great numbers, and let off pulses of eerie green light.

Head down to any bay at night time and have a look for yourself. The little critters are stimulated by water turbulence, so as you move through the water it might seem like you are making this light show happen. When a little oxygen is added to the water, by your swimming, or just by moving swinging your feet off a dock, the water will erupt in green glitters. It only happens for a moment, but it seems right out of a sci-fi movie!

For even better results, go to a bay as far away as possible from light pollution, and always visit on the moonless nights – in darkness, the bioluminescence will be all the more spectacular.

History
Sailors called it “the burning of the sea,” and were superstitious towards the strange blue-green light they would sometimes see in the water. In ancient Greece, mariners thought that it was caused by Poseidon or sea nymphs. In the 1400s, Christopher Columbus recorded observations off the coast of Bermuda, and described the bioluminescent algae as “like the light of a wax candle moving up and down.” Now we have unraveled the mystery of this surreal light show.

Why Do The Algae Do It?
In the summer months, the algae can grow at astronomical rates. They stay at the surface of the water, and photosynthesise in the presence of the sun’s energy. Billions of them gather off the coast of Bermuda, and if they collect in bays they can create an amazing light show. As night falls, the algae are more vulnerable to predation, and it is thought that they have developed their bioluminescence to help them survive.

As oxygen is added to the water, by fins waving or waves crashing, many individual algae light up at once, scaring away a predator, or perhaps alerting a secondary predator to the intruder’s position. If you swim through a dense cloud of bioluminescent algae at night, you’ll have a blue glow around you – the algae are hoping something else will see you and come and pick you off, so that you don’t eat them!

How Do The Algae Make Light?
Bioluminescence won’t hurt you – it is so-called “cold light,” that is produced through a chemical reaction within the little algae. It’s not advantageous for algae to have excess oxygen floating around because it can damage cells – when they come in to contact with oxygen, it instantly oxidizes luciferin, a molecule similar to chlorophyll, with the help of the enzyme luciferase, a reaction which releases energy.

This reaction serves to get rid of excess oxygen, and as a by-product creates the bioluminescent light we see. The light is blue-green in colour because of luciferin’s similarity to chlorophyll.

So, you won’t see bioluminescence if you don’t make it yourself – you have to create movement in the water for the algae to light up. If you see them lighting up far away from you, you might have an unexpected guest!

Does Bermuda Have Other Kinds Of Algae?
Yes! Bermuda is full of algae. Not all algae is bioluminescent. It is a type of algae that helps coral reefs grow and gives them their colour. While a piece of coral is made up of many small animals, able to catch their own food with tentacles, the coral cannot survive for very long without algae called zooxanthellae living in its tissues, which also provides it with a food source through photosynthesis.

Sometimes we can have massive blooms of algae – this is what turns Spittal Pond pink and what sometimes turns the North Rock tank in the aquarium green – when algae multiply quickly they can colour huge areas of ocean.

Algae can also be harmful. When some multiply, they release toxins and cause ciguatera, a disease than can affect humans who eat algae-affected fish. Bermuda has never experienced a red tide, but some species of algae can also release toxins into the water that cause mass fish die-offs.