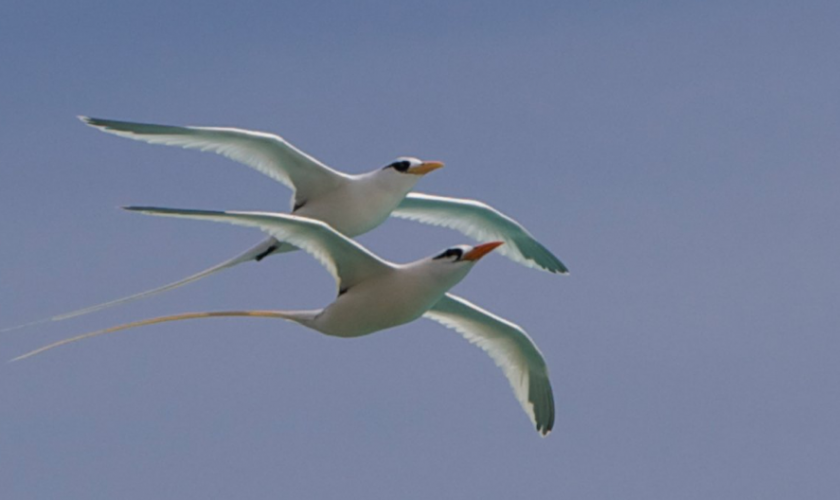 The Bermuda Longtail: An Interview with Dr. David Wingate

Longtails have officially arrived back on the island for the warmer months, and we couldn’t be happier that they’re here. We spoke with Dr. David Wingate about the tropical bird, on which he is an expert, and here’s what he had to say:

What is the scientific name for Longtails?

The proper name for a Longtail is White-tailed Tropicbird, Phaethon lepturus.

When do the Longtails arrive in Bermuda?

Longtails are Bermuda’s traditional harbingers of spring, returning to the island in late February or early March to breed.

How many Longtails usually nest here?

The Bermuda population of Longtails, estimated at 2,000 to 3,000 breeding birds, is believed to be the largest in the Atlantic, making it vitally important for the survival of the species.

We know they nest in the cliff side, but do they also use vegetation to build their nests?

No, they do not build nests with vegetation. They nest in cliff holes which must have a sandy floor to provide a soft surface for the eggs and chicks. The holes must also be protected from rain and direct sunlight.

When the Longtails come to Bermuda in spring are they coming to lay their eggs?

Yes, but first they must court and mate! Longtails perform an elaborate aerial courtship, with the male and female birds flying together and touching their tails. The females generally lay their eggs in April.

How many eggs do they normally lay?

They only lay one egg per nesting, but in the event of egg failure they can lay a replacement egg a month later.

Do they go back to the same spot every year?

Yes, once a pair of Longtails has adopted a nest hole they will return to the same site year after year.

Do they stay with their mates?

Yes, the same two birds will reunite at the nest hole each spring. Longtails live for about 10 years.

How long does it take the eggs to hatch?

The incubation period is 43 days. Most chicks hatch in late May and June.

Why do we see so many birds flying and diving in the early morning and not so many at mid- day?

Most Longtails seen flying in the morning are young courting adults that don’t yet have a mate or a nest. They return to sea in the afternoons to feed. The established nesting pairs are generally on the nest or far at sea getting food for their chicks so they are not often seen.

What do they feed the babies?

The chicks are fed on squid and ocean fish in the four to six inch size range.

When do the Longtails leave for the winter?

The chicks take two months to fledge and most leave the nest in August. Adult birds leave once their chick has fledged. By September, most Longtails are gone, but late starters or failed re-nesters are sometimes feeding chicks as late as November.

No, the fledged chick will leave the parent birds for good when it departs the nest hole, flying directly out to sea without parental guidance. At this point they still do not look like the adults, but have fine black barring on their wings and lack the long tail. The adult birds leave and return independently, spending the winter months apart.

Where do they go for the winter?

From September through to March, outside breeding season, Bermuda’s Longtails spend their time entirely on the ocean, ranging in the Sargasso Sea.

Are Longtails found anywhere else?

Longtails are found nesting on tropical islands in the Pacific, Atlantic and Indian Oceans. Bermuda is their most northerly breeding location.

Is Bermuda’s coastline overdeveloped and hampering the Longtail’s nesting habits?

Coastal development has certainly led to the destruction of potential nest sites, though with thought and care artificial nest sites can be incorporated into new developments. The dumping of rubble, trash and horticultural waste over cliffs is also a problem. Pet dogs allowed to wander on the coastline frequently kill Longtails.

What can you tell us about the new Longtail igloo nests?

The igloos are artificial nest shelters made of SKB-coated Styrofoam that are easy to install and readily adopted by Longtails. They can be purchased from the Bermuda Audubon Society www.audubon.bm.

Dr David Wingate OBE, is a well known ornithologist and naturalist. He was Bermuda’s Conservation Officer from 1966 to his retirement in 2000 and is best known for his efforts to bring Bermuda’s national bird, the Cahow, back from near-extinction and the restoration of Nonsuch Island as a living museum of Bermuda’s pre-settlement flora and fauna.