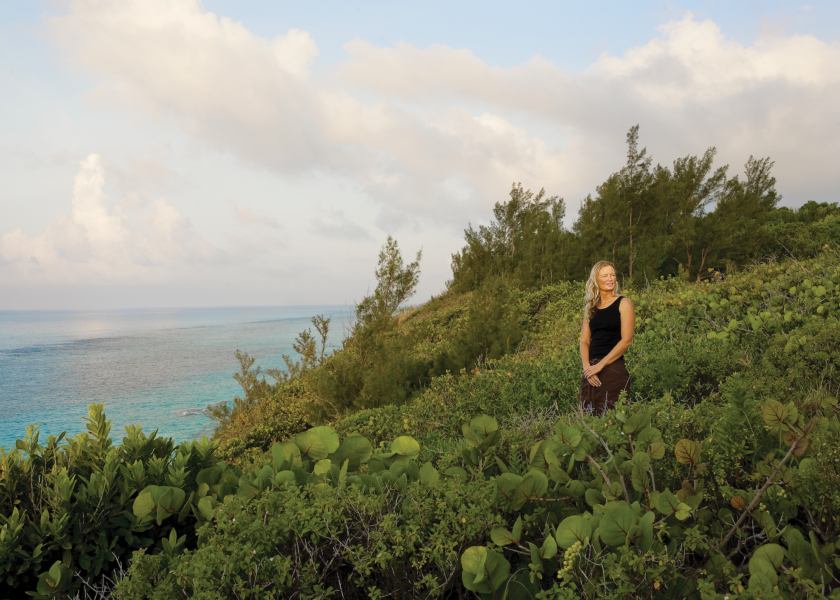 This article was taken from our archives. It first appeared in our Fall 2006 issue. Since the publication of this article, Elfrida Chappell has passed away, leaving the property in the care of the Audubon Society.


What could be sweeter than giving a present to your country and countrymen by wrapping up a parcel of land? With so little open space left on this tiny island – not even golf courses seem safe from developers’ covetous clutches – The Bermudian celebrates those who recognise the need to leave something, anything, even the smallest green space, for nature and the nurture of future generations. To the six donors we feature in this series, and the numerous others whose foresight and generosity will go on forever, we salute you.

The Alfred Blackburn Smith Reserve is perhaps the most significant contribution of land to Bermuda in the past decade. Spread over 8.7 acres along the South Shore in Paget, it was donated to the Audubon Society in 2003 by the late Elfrida Chappell.

“One of the reasons I was interested in giving the land to the Audubon Society in particular is that it’s a great opportunity to help the longtails and their nests, which are disappearing along the shore and in Bermuda generally,” said Chappell. “But I think perhaps I got the idea 35 or 40 years ago when making a trip to the West Indies from here, by ship. The ship went around the eastern end of Bermuda and along the South Shore, and I realised how little of the coastline was not built on. It made an impression on me. I realise that Bermuda is between a rock and a hard place. We need housing, so we have to build it. But it’s sad to see the open spaces being built on. I’ve been fortunate all my life. I’ve always had a lot of land. It wouldn’t have occurred to me to use it for profit.”

“My mother and my grandmother were great gardeners. They had a real interest in Bermuda plants and endemics and they passed that on to me—I’d always grown up with that type of interest and priority. I feel very glad that I was able to save this bit.”

Situated to the west of Coral Beach, the property initially consisted of several lots. Chappell inherited the first from her father, Alfred Blackburn Smith, when she turned 21, and she eventually bought or inherited the remaining parcels.

The donation is valuable not just because of the sheer size of the property but because the land’s preservation ensures the future of native and endemic plants. According to the Audubon Society, “This 8.7-acre reserve is one of the last remaining tracts of undeveloped Bermuda upland forest, supporting unusual plants such as box briar, Darrell’s fleabane and Turnera [ulmifolia]. White-tailed tropicbirds (longtails) nest on the coastal side of the reserve, while the woodlands on the lee side of the hilltop provide habitat for a variety of bird life.”

“It should be considered a national treasure. The views from the coastal cliff are breathtaking, the smells are invigorating and you instantly find yourself at peace as you wander along the footpaths through native Bermuda. The windswept cliffs support native and endemic salt-tolerant plants, while the protected side of the hilltop provides thick woodland to support a host of local biodiversity. Rare plants like box briar, shrubby fleabane, Darrell’s fleabane and Turnera [ulmifolia] thrive in this unharmed habitat alongside recently planted cedar, yellow wood and olivewood.”

Chappell’s hope was that the preserved space would serve as a memory of Bermuda’s past. “I feel that I was so lucky to grow up in Bermuda when I did. It was very uncrowded, very peaceful—there were no cars, no bikes. It was quite a different Bermuda than today, so very friendly. I was very fortunate and I think anything you can do to preserve that peacefulness and openness, we should do.