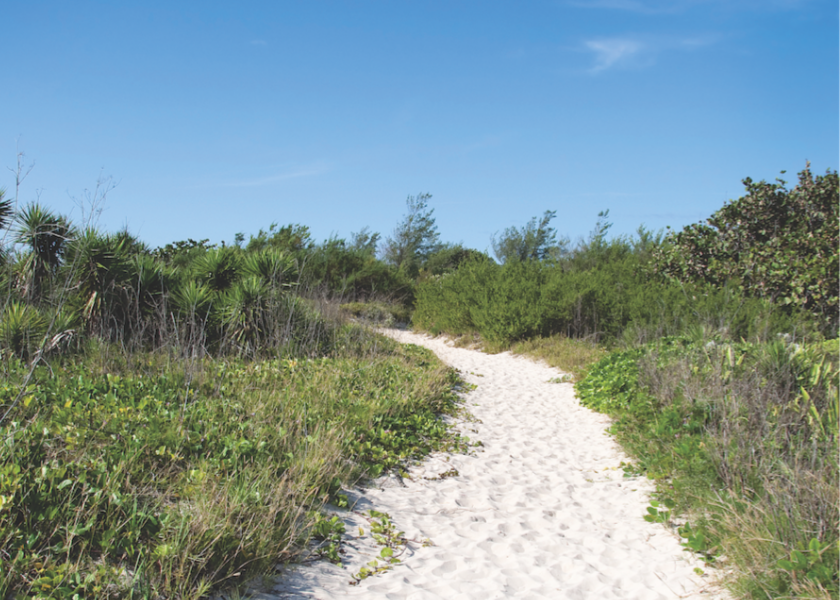 Tourist in Your Own Town: Warwick Parish

Who knew there was so much do to in Warwick Parish? For both visitors to the island and locals too, there’s plenty of natural splendour to be found in Warwick – here are some of our favourites.

1. Astwood Park
Astwood Park is one of the more “local” parks, compared to the more tourist-y areas like Horseshoe Bay nearby. The steep climb down to the actual beach makes it the perfect secluded romantic spot. The snorkelling off of south shore is spectacular – and because not many people go off of Astwood Cove, the reefs are pristine and thriving. The park is very high up compared to the sea, and a wonderful place to take in ocean views, have a picnic, and play games. Here you can see good examples of dunes and rocky shore habitats in Bermuda, with examples of prickly pears and Spanish bayonet, but be careful navigating around the steep trails on the edge of the park.

2. Southlands
Southlands seems to be an area forgotten by time. The 37 acre estate contains many historic houses, but shade from the tall, dense forest envelops all. The property is slightly creepy, with nature taking over most of the houses. The Southlands property was a neighbourhood occupied by the ministers of Warwick’s Christ Church in the 1700s. In the 1800s it was used as a quarry and some of the buildings in Hamilton are constructed with its limestone. Later, it and some of its surrounding land was bought by a businessman and developed into a grand estate.

Where the quarries had been now lie beautiful, stepped quarry gardens. There are some water features in the houses also, and the entire property is interesting to explore.

The area was scheduled to be developed into a hotel, but public outcry meant that Southlands has remained untouched. No one lives at the estate anymore and it’s rather eerie. It’s also home to some plants you can’t find very easily in Bermuda, including yellowwood and wild Bermuda pepper. 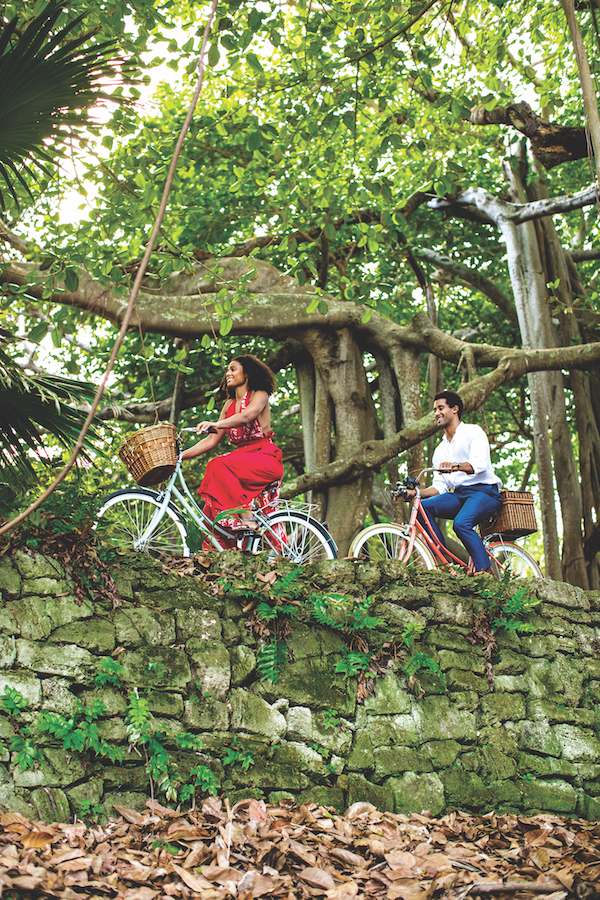 3. South Shore
Most people think of the beautiful beaches of Bermuda as being in Southhampton – but Warwick has it’s fair share! One of the best walks in Warwick is on the beach, starting at Warwick Long Bay. From here, you can make your way over the sand dunes as far as Horseshoe Bay. Some areas are farther from the shoreline than others, and at some points you might have to get your feet wet, but being able to explore a series of beaches that mostly go unnoticed is deeply rewarding.

One of the most beautiful places to walk here are underneath bay grape trees – the trees stretch above you, and their multicoloured leaves cover the path below. It makes Bermuda look like a different planet. At the end of your walk, be sure to look in on the new Horseshoe bay concessions, including a beach bar and café.

4. Riddell’s Bay
In 2018, the developers of the former Riddell’s Bay golf course told the public that they would create a 66 acre conservation zone alongside the few residential houses that are currently standing there. If the plan goes through, this would be larger than any other nature reserve in Bermuda, but the details of the plan are unclear.

It is true that anyone can walk through the former members-only golf course now. The hills provide a large area to walk, or run dogs. There are also a few ponds within the site that attract waterfowl and mangroves fringe its border with the ocean. 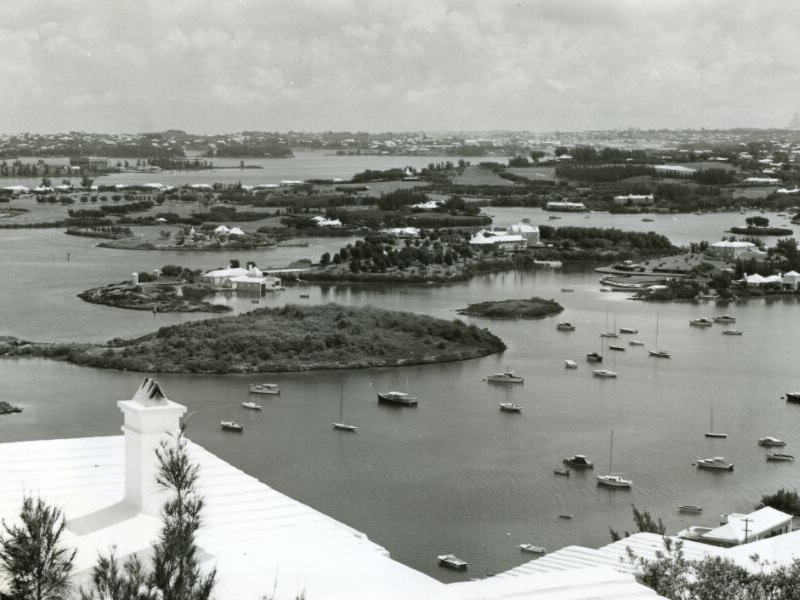 5. Darell’s Island
Formerly known as Captain Tucker’s Island for the governor of Bermuda from 1616-1619, Darrell’s Island was purchased by the U.S. military in the 19th century after the American War of Independence. It was used as a quarantine station and a prisoner of war camp during the Boer War.

Bermuda received a little over 4,000 prisoners of the Boer War, which we housed on various islands. The men were aged from as young as 6 to as old as 72. They were kept prisoner because they refused to pledge allegiance to the British crown and were closely guarded. About 1,100 prisoners were held on Darrell’s Island until 1902.

Prisoners were brought here because POW camps in Cape Town and Simon’s Town quickly became full. Conditions there were harsh, with limited rations, and rampant disease which killed many of the prisoners, especially children. In Bermuda, the prisoners grieved being removed from their homeland, but conditions were better. Activities were introduced to combat sadness and boredom in the prisoners, including hand craft, which made the prisoners a little money. Many of the items the prisoners made can still be seen in museums today.

Imperial Airways built an airport on the island which served as a stop over point for trans-Atlantic flights. The Royal Air Force used the island’s airport during the second world war, and after the war was over air services were moved to Kindley Field, where the airport now stands. You can still see the ruins of Darrell’s Island airport today.

In subsequent years, Darrell’s Island has been used as a site for student summer camps for sailing and camping. 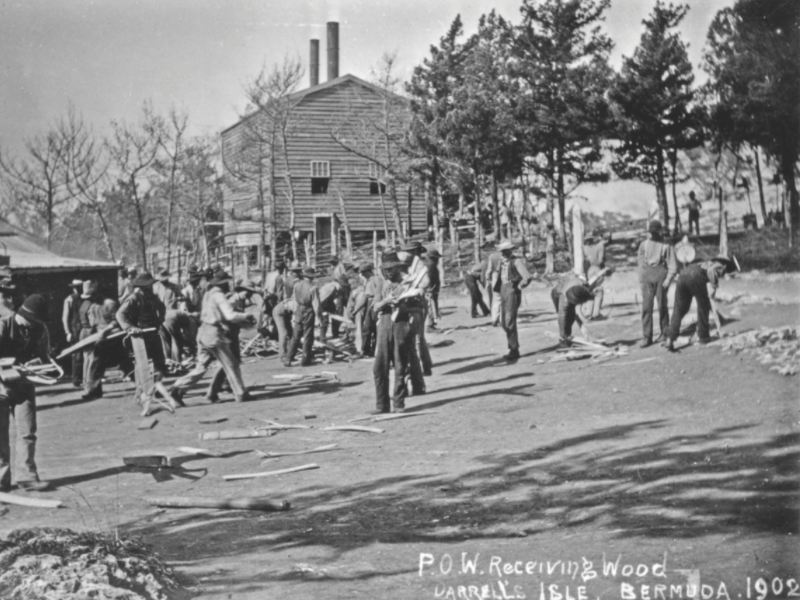 6. Wind Reach
This campground and riding facility is designed to help people with disabilities and special needs, however, the charity also provides programs for children of all abilities, making it the perfect family outing.

The site has a petting zoo of friendly donkeys, goats, rabbits, birds and other farm animals. Wind Reach also keeps horses and ponies at the stables on site as part of their riding for the disabled program, designed to provide physical therapy to those with special needs.

The nature trail near the property is accessible and safe for all ages, and includes a habitat for the Bermuda skink.

Wind Reach also has an activity centre full of conference rooms and fully equipped with bathroom and kitchen facilities. The main building also contains two sensory rooms, which are temperature and light controlled, and which are designed to create interesting sensory experiences for those with special needs.

7. Warwick Pond
Warwick Pond and surrounding railway trails are a wonderful place to walk with your family or your dogs. Spittal Pond is the largest freshwater pond in Bermuda, though it has been affected by pollution by road run off in recent years. The pond is surrounded by tall rushes, so it’s hard to see from the trail, but on the road side of the pond you can walk out on to the viewing deck. The trail has informative signs telling visitors about the animal and plant life that can be seen.

This nature reserve is a great place to see migratory barn swallows in the fall, and snipe in winter. The reserve contains some very large old cedar trees, as well as allspice and Surinam cherry.

Walk up the hill a little ways out of the nature reserve to join up with the extensive Warwick railway trail, which can be followed in either direction for more natural sights.