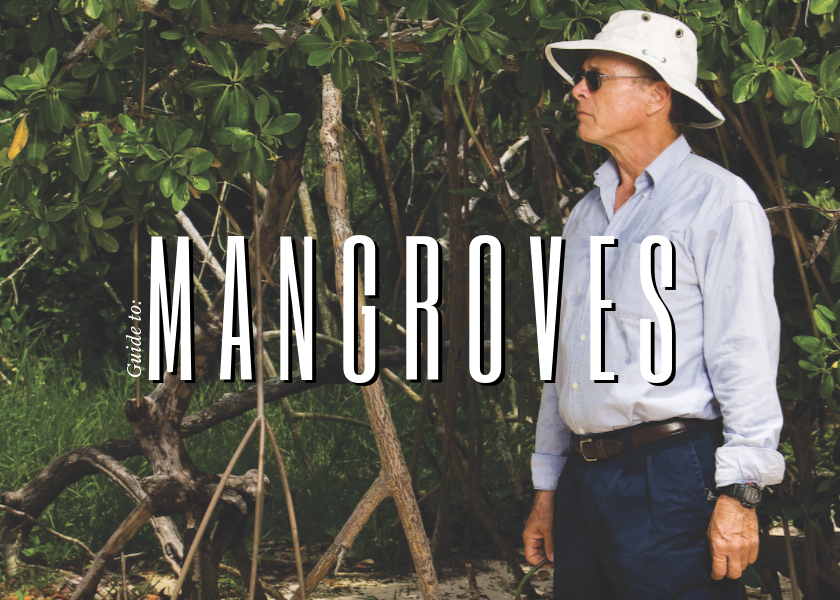 Trees That Go Above and Below: A Guide to Mangrove Exploration

Mangroves are some of the most productive ecosystems on the planet. They capitalise on below water and above water space, attracting a myriad of marine life as well as breeding waterfowl. Get ready for an adventure with our guide to Mangrove Exploration in Bermuda!

Where to Go:
Walsingham Pond is undoubtedly one of the most impressive marine ponds and mangrove swamps on island. Tom Moore’s Jungle Park also includes some mangroves fringing the sea.

What Makes Mangroves So Special?
These trees are what the entirety of the inland pond habitat are built upon. There are two species of mangrove found in Bermuda: the red mangrove and the black mangrove.

Mangroves colonize coasts by way of their very large, finger-shaped floating embryos. In general, red mangroves colonise a section of coast first, and provide a sufficient buffer from the current to allow the black mangrove to grow behind it.

However, inland mangrove swamps are usually only colonized by one species of tree. Mangroves must colonize marine ponds via their seeds reaching them over land in some way. Evidently, one species outcompetes the other in inland swamps, where water currents are not an issue.

Breathing When You Live Underwater
Red mangroves are such a good water break because they grow huge prop roots, which can be up to a metre long. These strong roots allow the red mangrove to anchor themselves fast in the sediment, and to have a part of their root above water at all times, allowing the tree to absorb oxygen.

The black mangrove looks more like a traditional woodland tree. The area surrounding the tree is populated by many woody pencil-like projections called pneumatophores. These can be thought of as little straws through which the black mangrove can breath as it is growing underwater.

Salt Water Expulsion
Each tree has a different way to get rid of excess salt, which is toxic to the plant, but the absorption of which is a symptom of living in seawater. The black mangrove excretes salt on the surface of its leaves – if you lick one, you can taste the salt crystals!

Red mangroves concentrate all their excess salt in certain leaves, which you can see on the tree as it turns yellow. Eventually these few leaves die and fall off, taking the salt with them. It is this very leaf litter and the nutrients it brings that helps the pond below be so full of life.

Furthermore, the prop roots of the red mangrove provide ample above and below water habitat for many other organisms. The mangrove prop root can be thought of as a habitat within itself, with distinct zones, every inch of which is occupied by sponges, algae, hydroids, and sessile animals like oysters.

The mangrove treetops provide areas for birds to nest, or perch while searching for food. Even the deep down mangrove roots provide safe refuge for young fish! The mangroves truly play a crucial role in supporting healthy ecosystems!

Species You’ll See:
Crustaceans: small, brightly coloured mangrove crabs can be seen chilling out on the mangrove’s prop roots, grazing on algae. They will climb trees to get away from predators, but live in mud burrows. You might also see red land crabs and land hermit crabs.

The giant land crab has historically lived in Bermuda, but is being seen less and less frequently. The only reserve where you may see one is Hungry Bay, but they are shy and nocturnal.

Molluscs: apple snails lay clutches of fuchsia eggs above the water’s suface. They are an introduced species that outcompetes native snails. The shell is 2.5 inches long, and bears stripes.

Coffee bean snails are predictably named, and hang out on prop roots. The mangrove periwinkle is larger than its relative on the rocky shore, and brown in colour.

The mangrove oyster is very numerous and densely populated on mangrove roots. The shells are very thin, and marked black and brown.

Incredible concentrations of algae, sponges, and sea squirts live in mangrove swamps. Walsingham Pond has been called ‘the sponge capital of the world’ by sponge scientists. These organisms are very beautiful, but there are too many to list. Notable species include fire sponge, purple sea squirt, caulerpa, and chicken liver sponge.