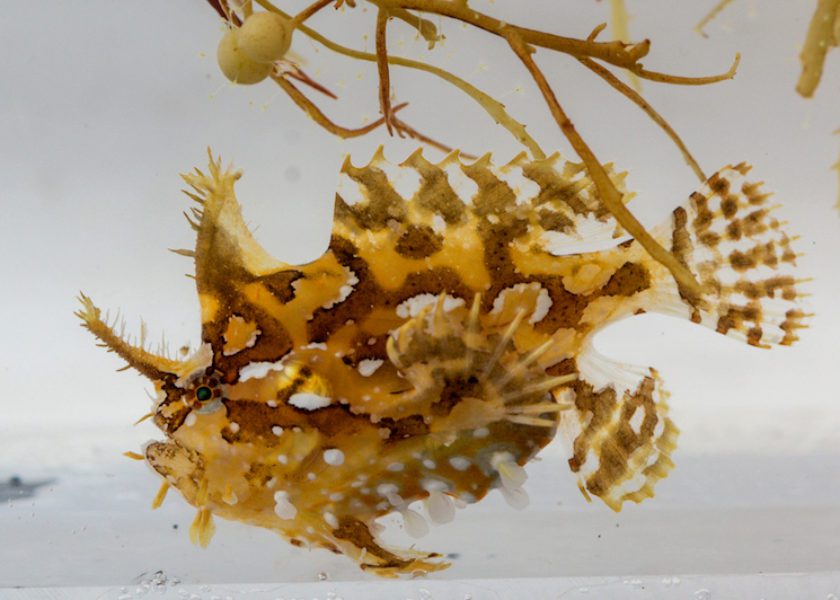 What’s Living in the Sargasso Sea?

The struggle for life that persists in every organism on earth has prompted the creation of whimsical habitats and ingenious adaptations, which allow for the most efficient conversion of the sun’s energy into energy that can be used by them. From salt marshes that seem too toxic to be habitable, or the darkest and most desolate parts of the ocean, life still persists.

One of the most unique and specialized habitats in the world can be found in the Sargasso Sea. Starkly contrasting the vibrancy of coral reefs, the open ocean is largely deserted, but there is one place where life flourishes in the endless blue wasteland – on the floating mats of Sargassum Seaweed. The animals that live here are characterized by their small size and precise camouflage. 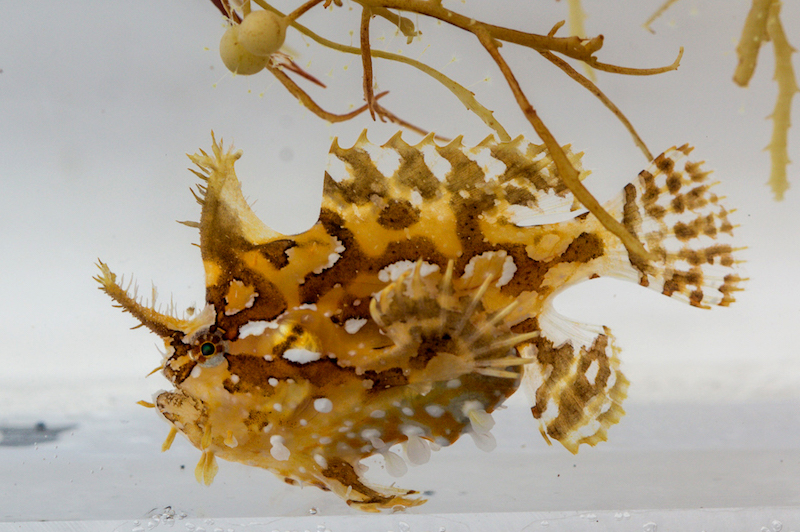 With a downturned mouth grumpy as an old man, the Sargassum Fish is adorned with lumpy growths reminiscent of skin tags, which allow it to blend in completely with the scraggly Sargassum weed where it lives. The tiny fish is mottled with deep brown markings that let it fade into the Sargassum weed ominously. 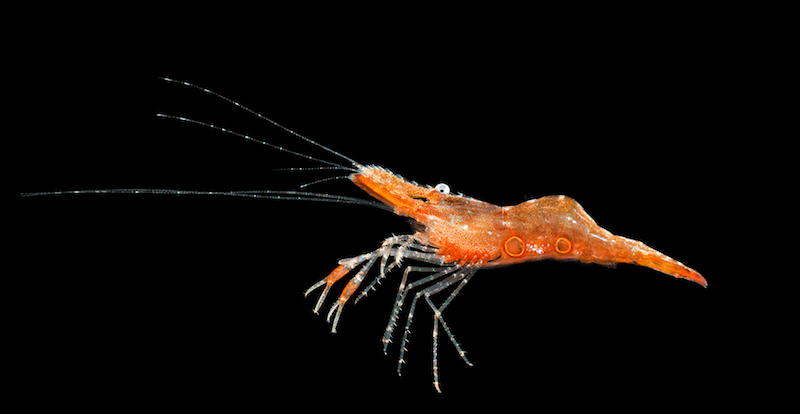 Tiny shrimps and crustaceans cower in fear among the delicate leaves, branches, and berries, anxiously unable to tell where the Sargassum ends and the Sargassum Fish might begin. The haggard frogfish is also a cannibal, with one dissected individual found to have sixteen juveniles in its stomach – a harsh necessity of life in what could be called an underwater desert, with the vastness of the empty ocean, and the possibility of starvation, stretching out on all sides.

This is a tragic world, which is implied in the scientific name of one of its inhabitants – Leander tenuicornis. Alluding to the Greek myth of Hero and Leander, this shrimp travels across the Atlantic Ocean just as slender Leander swam across Hellespont to visit his beloved until he was drowned in a storm.

Though the Sargassum Shrimp has many competitors on the Sargasso weed, it has the advantage of being coloured exactly the same tan colour as the plant. As the diminutive shrimp hides among the delicate Sargasso leaves, he tends to his garden – dusting the balloons and thicket with feathery mouthpieces to pick off any food particles there.

Another cantankerous crustacean of the Sargassum weed, the Sargassum Swimming Crab, uses a flattened hind leg to glide through the water. This crab will most likely never set foot on a solid surface, permanently suspended in the water column or resting on floating seaweed. 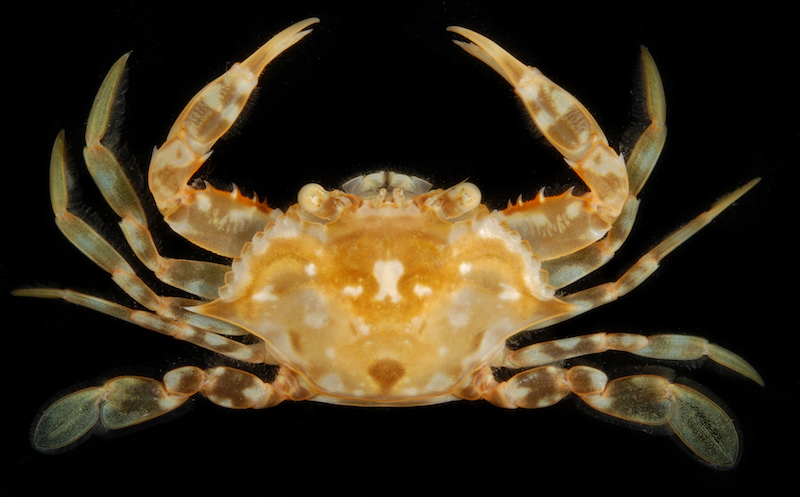 Mates are few and far between – if you spend your life floating on a raft dependent on the tides, the best you can do is leave your love life to chance. These crabs release a zoea larva into the plankton, which transform from microscopic unrecognizable juveniles into a more crab like appearance in a few weeks.

Adrift and on their own, crab zoea become food for many other plankton feeders, including those living on Sargassum, and they have little chance of survival. For this reason, crabs release thousands of hatchlings in an effort to ensure the survival of at least some of them.

Another highly specialized Sargassum predator is the Sargassum pipefish, which is closely related to the crooked seahorse. The needle-like fish moves in silently, slowly, closer to its prey, and then suddenly expands its once-diminutive mouth to suck in morsels of food like “a powerful pipette,” as Wolfgang Sterrer characterizes the motion in his book on Bermuda’s marine life.

Other fish also call the seaweed their home, if only temporarily. It has been recorded by scientists that some species of flying fish actually make nests in the Sargassum weed, presumably to give their young a better start in life by attaching them to a Sargasso seaweed nursery, instead of simply setting their eggs adrift in the ocean to hatch in the pelagic sea.

This tiny world is wily and dangerous as a jungle, and just as prolific. Though the creatures that inhabit it may be smaller than a fist, the impact of the Sargasso Sea on the rest of the oceans and the world is huge. It can be thought of as the nursery of the ocean, and the experiences young organisms have here will affect them the rest of their lives. In the weedy thicket, huge pelagic predators make their first fins through the water and gain the strength to grow to full size, and the pollution of the sea first bioaccumulates inside them by ingestion.

Dolphinfish, sailfish, marlin, and others only make it to sizes that can make a fisherman struggle by waiting out the most dangerous parts of their lives, when they are small as a thumbnail, hidden among Sargasso seaweed. It is unknown just how many fish rely on the Sargasso Sea for integral stages in their lives.

The same currents that attract floating larvae and Sargasso seaweed to the middle of the Sargasso Sea to live also ensnare microplastics and other pollutants. These plastics float on the surface of the water, or break up into pieces as small as confetti that are suspended in the water column, and when ingested by fish poison them with DDT and PCBs.

Though the impact of plastics on humans has not been well documented, various species of seabirds, turtles, marine mammals and fish have been harmed by the ingestion of or entanglement with plastic waste. The plastics that are already in the ocean cannot be practically cleaned up – even if surface pollutants could be removed without harm to the animals living among them, plastics still remain under the surface. The only option to ensure the health of our oceans is eliminating problems at the source, by reducing plastic waste and emissions.

To find out more information and to get involved, have a look at The Sargasso Sea Commission’s website.