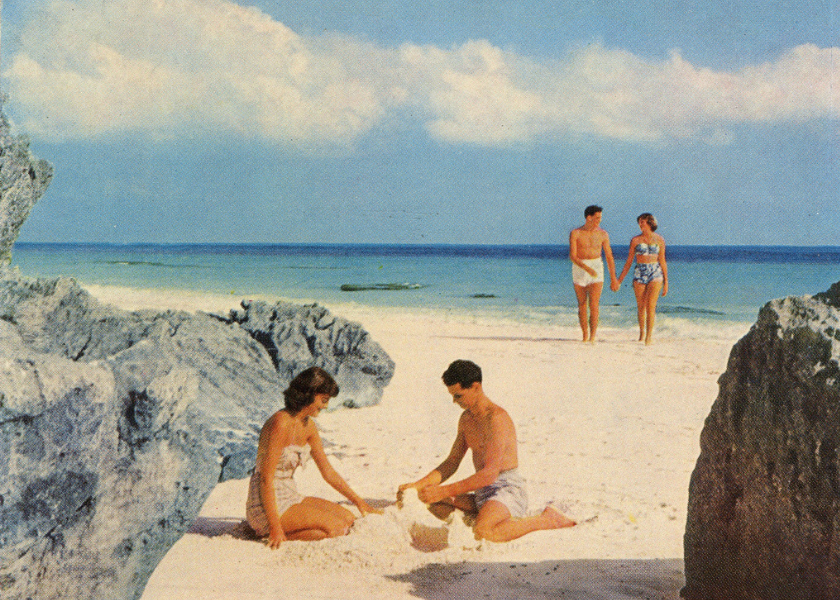 Why is Bermuda’s Sand Pink?

Bermuda’s characteristic pink sand is all down to one little invertebrate – the red foram (Homotrema rubrum). Like many sea creatures found in Bermuda, such as sally lightfoot crabs and West Indian top shells, red foraminifera take in calcium carbonate from seawater and use it to construct hard skeletons.

The red foram is an amoeba-like organism, with a gelatinous body that is very vulnerable to predation in the ocean. So that it doesn’t leave itself so exposed, the red foram builds its own home – a small, red, spherical skeleton, which they fix to the rock. These little “casks” are the red fragments you can see if you pick up a handful of Bermuda sand.

The red foram is extremely common, but you won’t notice it on dives because it’s so small, and because it often fixes itself to the underside of rocks underwater. Here, the little foram crouches in its skeleton, while its “pseudopodia,” tiny tentacles it uses to snag particles of food, stick out of holes in the skeleton.

As the foram grows, it builds another little red skeleton, moving out of the old one and leaving it cemented to the rock. The trail of discarded skeletons the growing foram leaves can measure up to 3mm across.

How do foraminifera get from remote underwater rocks to our shores? When they die, the little critters fall in to the sediment and are washed in shore. Furthermore, the rock substrate they have built their home on may be damaged and broken up by a storm or other interference, causing the red skeletons to wash ashore.

Our parrotfish play a big role in getting red foraminifera off the rocks. They eat algae that grow on bare rock surfaces on the reef, and every time they scrape algae off of the rock, their powerful beaks take a little limestone with it. Red foraminifera are frequently caught in the crossfire, and later excreted along with limestone sediment by the fish.

In this way, Bermuda’s beaches are made to blush. The red foraminifera mix with the white limestone sediment to make rosy beach sand. And it’s all thanks to the marine ecosystem surrounding our little island.