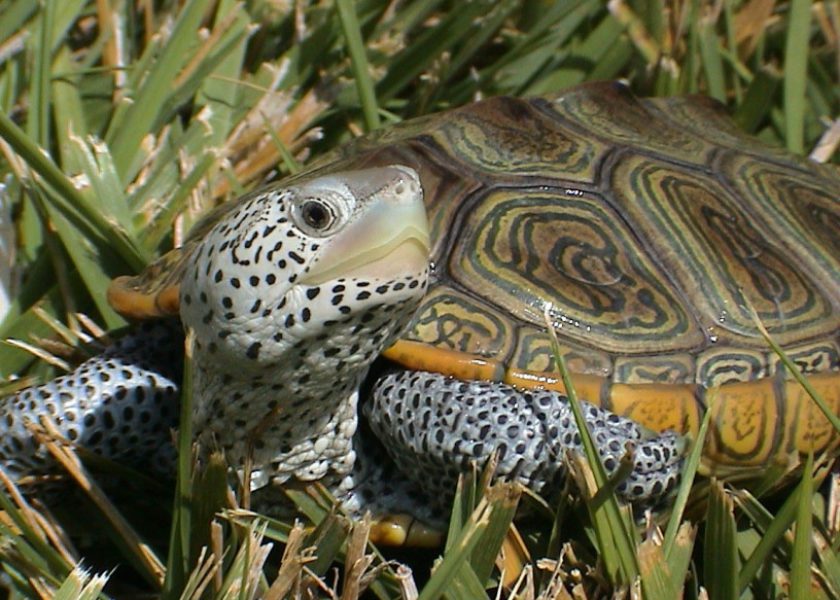 Are Diamondback Terrapins native to Bermuda or were they introduced?
Native. In 2007 their origin was tested using a combination of palaeontologic (fossil, radiometric and palaeoenvironmental) and genetic data. These lines of evidence supported the hypothesis that diamondback terrapins are natural colonizers of Bermuda, having arrived between 3000 and 4000 years ago, most likely using the Gulf Stream as their way to the island.

What do they eat?
Diamondbacks are carnivorous and feed mostly on a variety of marine mollusks and crustaceans like periwinkles, crabs, mussels and clams. In Bermuda, diamondback terrapins also eat small pond snails in the brackish water pond environment.

Where do they live?
Diamondback terrapins live in coastal environments like brackish river estuaries, tidal creeks, salt marshes and mangroves. They have a lifecycle comprised of distinct phases that have different habitat requirements. Adult and sub-adult terrapins need brackish bodies of water in which they feed, mate and, for populations residing in cooler regions, brumate (the reptilian equivalent of hibernation); mature female terrapins require sand for egg laying; hatchlings and small juveniles require dense vegetation to forage and hide from predators. In Bermuda, diamondback terrapins live in only 4 brackish water ponds in Hamilton Parish.

Who are their predators?
Diamondback terrapins are most vulnerable during the egg and hatchling/young juvenile stage. Predators in the North American range include a variety of small mammals (e.g. raccoons, rats, skunks, foxes) and birds (e.g. crows, sea gulls, herons) as well as ghost crabs and ants. In Bermuda, yellow-crowned night herons have been identified as a significant predator of small terrapins.

What is the significance of the pattern on their shells?
Some people think that the concentric rings on the top part of the shell look like the facets of a diamond; thus the common name ‘diamondback’. Diamondback terrapins show great variability in shell patterns and colouration throughout their range. Shell colour is usually of earth tones ranging from light olive and brown to dark brown and black. Skin colour also varies throughout the range, but is generally shades of grey with dark spots, flecks or lines.

Can they pull their head inside their shell?
Yes, and they frequently do when startled on land.

What are their defense mechanisms?
Diamondback terrapins are excellent swimmers and they will almost always flee from danger when in the water. They have also been known to bury into muddy sediment to escape from perceived threats. It is only on land that they retract their head and limbs for protection.

Are they thriving or are they endangered?
Diamondback terrapins are imperiled across their range. This species has had a long history of exploitation as a food source in the U.S.A. The demand for terrapin meat peaked between the late 19th and the early 20th centuries when the species became regarded as a gourmet food item. As a consequence, natural populations across the North American range were decimated. These populations continue to be negatively affected by habitat loss, predation, crab trapping activities, road mortality and commercial harvest for human consumption. Diamondback terrapins are listed as a globally near-threatened species by the International Union for the Conservation of Natural Resources (IUCN) and in 2013 diamondback terrapins were added to Appendix II of the Convention of International Trade  in Endangered Species of Wild Fauna and Flora (CITES) in an attempt to regulate international trade so that exports from the native range are not detrimental to the species’ survival in the wild.

What can we do to support the Diamondback Terrapin population in Bermuda?
I always encourage people not to release unwanted pet red-eared sliders into Bermuda’s ponds because there is always the risk that one day a diseased slider may transmit an illness to our native population of diamondback terrapins. People can also help our fragile terrapin population by not collecting them from the wild as this activity removes valuable individuals from the local breeding population (there are only 100 adult and sub-adult terrapins estimated in Bermuda, of which 64 are female and 22 male). Bermuda’s diamondback terrapins received legislative protection in 2012 when they were listed under the Protected Species Act. People can learn more about this rare Bermuda reptile by clicking HERE.

Dr. Mark Outerbridge is the wildlife ecologist for the Department of Conservation Services and has spent the last decade studying a wide variety of species found within Bermuda’s marine and terrestrial environments, with priority given to threatened and endangered wildlife. Since 2004, Dr. Outerbridge has developed and initiated several scientific studies on the biology and ecology of Bermuda’s endemic killifishes and skinks as well as native diamondback terrapins and sea turtles. He also has a professional interest in the impact that invasive, non-native species have upon Bermuda’s fragile island-ecosystems. In 2006 he pioneered a trapping methodology which resulted in the capture and removal of over 1,500 feral red-eared sliders from numerous fresh water ponds island-wide, and since 2008 he has been licensed and actively participating in the culling of lionfish from local waters.