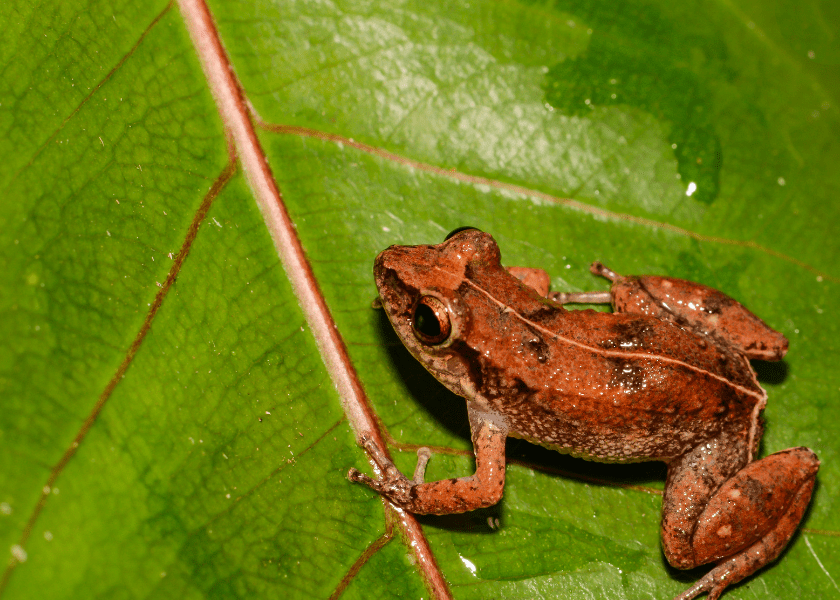 What is the Latin name for a whistling frog?

Do whistling frogs live in trees?

Not necessarily. During the day, they will be hiding in moist, sheltered areas in places like rock walls, flower pots, and in vegetation that is shaded.  At night, when the males are calling, they usually will move to the branches of bushes or trees to call.

How and when did whistling frogs come to Bermuda?
The exact date of E. johnstonei’s introduction is unknown, but it was reported that they existed in very small numbers in Pembroke parish before 1880, when a pair from the Lesser Antilles was deliberately introduced in the same parish.
Based on the known range of E. johnstonei before 1880, it was hypothesized that the original population also arrived from the Lesser Antilles, probably in vegetation that was imported from that location.

Is their lifecycle the same as a frog’s (i.e. egg, tadpole, frog)?

Yes, but they undergo what is called direct development.  Eggs are laid on land or in the bracts of vegetation, not in a pond.  Each egg will contain one tadpole and the tadpole never leaves the egg, but undergoes metamorphosis within the egg.  When the egg hatches (it looks like it melts), there sits a very tiny, fully formed frog.

Where do they lay their eggs?

In moist areas such as in flower pots, walls and under leaf litter; a place that is out of sight, moist and protected.  The males often will guard the eggs, eating any bugs that threaten the eggs.

How many eggs does a whistling frog lay?

What is the whistling sound that they make?

It’s actually a two toned call that only the males make.

Why do they make it?

The males are calling to attract females, advertising that they have a suitable place where a female could lay her eggs.  The males will fertilize the eggs and often babysit them until they hatch some three weeks later.

Why do we hear them only at night?

They mostly call at night because that is when the frogs are active, however, when it is raining during the day, particularly in the late afternoon during the summer, you can often hear whistling frogs calling.

Where are they when we don’t hear them?

When we don’t hear them, they are hiding. They would desiccate (meaning, dry-out) if they were out in the sun so they need a moist area that also affords them some protection from predators, if possible.

Are they lively all year long?

Their activity depends on temperature so they will be less active during the winter months, like the toads. They only call at night if the temperature is above 67 degrees fahrenheit or thereabouts.

Are they unique to Bermuda?

Where else in the world can they be found?

What do they eat?

Are there parts of Bermuda where the population of tree frogs is denser?

They appear to be more densely populated in the forested areas, particularly those that are around marshes. They are very numerous along Parsons Lane in Devonshire, for example.

Dr. Jamie Bacon is the education officer and a research associate with the Bermuda Zoological Society and has been the Principal Investigator for the Bermuda Amphibian Project since 2000.  Her research has shown how pollution is affecting toads, terrapins and killifish in Bermuda.  She currently is the vice chair of the global advisory group on the ecotoxicology of amphibians and reptiles to SETAC (the Society of Environmental Toxicology and Chemistry)