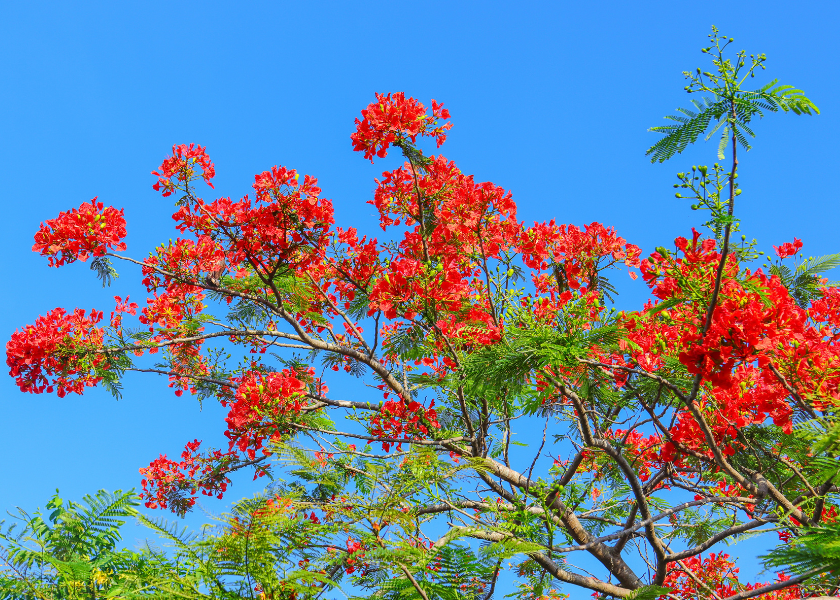 Liz Jones proposes the idea of a poinciana festival to celebrate the tree’s magnificent scarlet blossoms in June.

Every May, Rochester, New York, holds a lilac festival. People make a special trip to Highland Park to ooh and ah over some 1,200 bushes of white, purple, pink and, yes, lilac blossoms. Lilacs, of course, don’t grow in Bermuda-we have too hot a scene for such delicate flowers. But I think we should adapt the Rochester tradition by holding a June festival instead. That way we could celebrate our poinciana trees. They may not be as fragrant as lilacs, but their fiery blossoms are certainly more dramatic and aristocratic. After all, it’s not for nothing they’re dubbed royal poincianas.

If the festival ideas takes hold, Mike and I might be very noble and allow visitors to stop by our tree. Now, trees have been blamed for all sorts of phenomena-knowledge and original sin, for example. And certainly our tree was responsible for our decision to buy a house. As soon as we saw it, we fell in love with it even though it was practically naked at the time-the leaves were at the budding stage. Not everyone understood, though. “That’s a messy tree,” one guy told us. “It will mess up your yard. I’d cut it down if I was you.” True, poincianas are deciduous, and true, ours often rains tiny yellow leaves into my coffee cup when I’m sitting under it. But what’s a little mess compared with the grandeur of its canopy? Some people have no aesthetic appreciation.

Our young friend Sol was an exception, however. He came to stay one June to get over a broken love affair, and I feel sure our poinciana had a lot to do with his recovery. He took one look at it in all its scarlet glory and promptly collapsed on the chaise long conveniently positioned under it. For most of his stay, he lay there entranced by the feathery intricate leaves and by the blaze of blossoms cascading down the tree’s crinoline skirt. Sometimes, he’d take a break from tree gazing and immerse himself in the exploits of solider Richard Sharpe. (If you haven’t come across this creation of novelist Bernard Cornwall, just think Harlequin romance for men and you’ll get the picture.)

I, of course, got a bit edgy. How could I have a guest and not show him Bermuda? So every now and then I’d bully him out of his trance and into visiting a beach or two. As we drove along, it was the poincianas in Jennings Land, for example, that provoked the most animation. “Fantastic!” he exclaimed. “Incredible.” Polite guy that he was, he constantly pointed out that ours was the most beautiful, although he admitted there was serious competition. (Oddly, he was here in June 2003 when the trees were at their shining best. We all know what happened the following September-Hurricane Fabian, that’s what. Could they be hurricane predictors? Poincianas looked particularly beautiful in 1987 as well, the year Hurricane Emily tore the island to shreds.)

Anyway, Sol was very enthusiastic about my poinciana-festival idea. Tree hopping made absolute sense to him. Objectors might argue that such a festival would be a cheat since poincianas are not native to Bermuda. They are in fact native to Madagascar. But lilacs aren’t native to Rochester either-they originated in Europe and Asia, with the majority of natural varieties coming from Asia. Does that deter lilac admires from visiting Highland Park? Or prevent Rochester from becoming the lilac capital? Absolutely not. So we could in similar fashion ignore the true origin of the poinciana.

Besides, other countries have falsely claimed these trees for their own. Apparently, the poinciana is the official tree of Puerto Rico. And throughout Central America the poinciana is associated with Indian legend. It’s known as Malinche, after the beautiful mistress of Spanish commander Cortés, who conquered the Aztecs. As some legends have it, she prevented more widespread slaughter, since she and Cortés had a son, she became known by some as the mother of the new Mexican people called Mestizos-the Indian/European mixed race who make up most of Mexico’s population. The poinciana is also known as the peacock flower, flame of the forest or flame tree. If you want to be clever and continue the Latin theme, you can call it the Delonix regia.

Should the festival take off, we could provide our visitors with other useful bits of information. According to Jill Collet’s Bermuda: Her Plants and Gardens, 1609-1850, the first poinciana tree to be planted in Bermuda may have been the one at Orange Valley in 1830. A poinciana was definitely imported and planted at Government House in 1870.

And we could offer musical events. What I didn’t realise was there’s actually a song called “Poinciana (Song of the Tree).” It was first recorded by Bing Crosby in 1944. Surely a Bermudian singer could give it a calypso flavour. The words go like this:

Blow tropic wind, sign a song to the trees.
Trees sigh to me, soon my love I will see.
Poinciana your branches speak to me of love,
Pale moon is casting shadows from above.
Poinciana, somehow I feel the jungle heat,
Within me there grows a rhythmic savage beat.
Love is ev’rywhere, its magic perfume fills the air,
To and fro you sway, my heart’s in time, I’ve learned to care.

Poinciana, through skies may turn from blue to grey,
My love will live forever and a day.
Poinciana, from now until the dawning day
I’ll learn to love forever, come what may.

No wonder Sol spent so long under the tree. You’ll be pleased to hear he’s now happily married and living in Brighton.