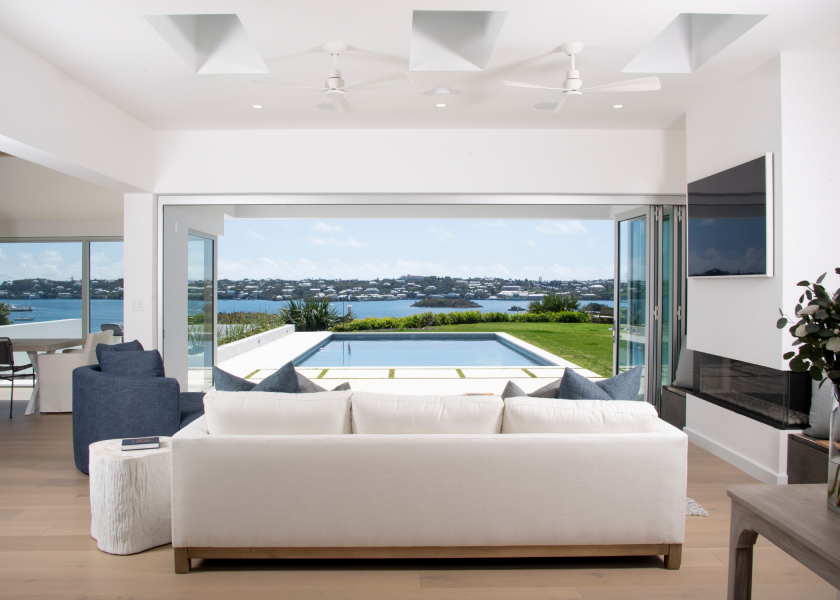 Dramatic water views, more than one way to escape the heat and sun, and with lots of green landscaping, Sunrising is a spectacular home for any time of year, but particularly Bermuda’s summer, when the indoor-outdoor living design really comes into its own.

“It’s all about opening the big sliding door and creating that big indoor-outdoor space,” says the owner. “When entertaining, it’s the grill on, people eating outdoors, snow cone machine in the kitchen for the kids. A couple of hours go by and it’s a nice day hanging in a beautiful space.”

The owner and his wife even celebrated their new home by hosting their August 2021 wedding in the back garden. “I was married on the lawn overlooking the harbour. It was stunning,” he says. “It had all the elements of a happy home. It was amazing just having people around and family and friends who hadn’t seen the house since it had been renovated.”

When the owner bought Sunrising, which is hidden away in Point Shares, it was a one-bedroom cottage, originally built in the 1950s which was, he continues, “very well-built,” but with a “funny layout.” As is common with many older houses, it had been built with protection in mind, so keeping the outside, outside, with lots of walls and small windows. The complete opposite to how the house looks now.

Every room on the harbour-view side of the house now has floor-to-ceiling windows and doors, which lead directly out onto the under-cover porch and swimming pool. Accordion doors have been used in the living room which open out completely to really connect the porch to the inside of the home. Where a room was too dark or windowless, a number of skylights were installed to rectify this which have the added benefit of providing extra ventilation and cooler air on a warm day.

In order to turn his small, pokey, one-bedroom cottage into his dream family home, the owner turned to Jacob Hocking, Lauren Grayston and Sarah O’Brien of CTX Design Group for the architectural and interior design. “The property had a lot of wasted hillside and Jake and his team were so incredible the way they utilised space in creative ways,” explains the owner. “He came up with the concept of pushing the house in an easterly direction onto the hillside. This protected so much of this beautiful yard. He built the underground apartment and built out the kitchen in spacing that was otherwise wasted.”

While the owner obviously wanted a beautiful house, which took full advantage of the views, budget and functionality were also vital considerations. The house needed to be big enough for his family, but not too big. The whole of this three-bedroom, two-and-a-half-bathroom house, with one-bedroom apartment below, is therefore very well used and a number of small but clever details help to make the most of every area.

The master bathroom, for example, has sliding doors leading out to the pool, meaning it doubles up as a “pool house bathroom.” “Kids run in and out from the pool and it’s all tile so it’s easy to wipe up water and grass,” he points out. “The idea of putting in another bathroom and pool house would have taken up yard I wasn’t willing to forgo. It comes down to function and I didn’t want to over-build,” he adds.

In the living room, the chimney breast plays host to a three-sided gas fireplace above which sits a picture frame art television which can display artwork, movies or your favourite TV show, depending on how the family choose to use that space on any given day.

A lot of attention has been given to colour both inside and outside Sunrising. The owners enjoy light colours, and everything was chosen to create a coastal, ocean feel which has a contemporary but traditional vibe as well. The floors and decorative beams in the kitchen are a light wood colour and match the structural beams in the children’s playroom. A variety of blue, grey and white tones are used throughout the home adding to the spacious feel.

In the main bathroom, a striking turquoise tile has been used in an open shower which, when combined with the large mirror opposite, makes the room look considerably larger than it is. “It’s not a huge bathroom, but we fit a lot into that space and the open shower just makes it feel so huge,” says Grayston.

In a stroke of “it was meant to be,” when the owners, who split their time between Bermuda and Santa Monica, picked out the blue for the front door and a separate blue for a sliding door, it turned out that the formal names for those shades were Bermuda Blue and Santa Monica Blue. “We chose the colours and were like, wow! That’s funny. We have these two lives, one in Bermuda, one in Santa Monica,” he laughs. The paint colours are by Benjamin Moore and are available at Rowe Spurling.

His wife, he continues, was instrumental in choosing the furniture and colour scheme. “We found it changes in the light,” he explains. “Sometimes white, sometimes deeper grey, sometimes blue. We found that to be an interesting element, depending on the sky or if it’s a cloudy grey day, it did change the look of the colour.”

Another area where considerable thought was put into getting the colour exactly right was the swimming pool, the colour of which perfectly matches the harbour waters beyond. CTX created this using a darker Diamond Brite. “Sarah O’Brien was out there with the different colours and images checking to see which were closer to the colour of the ocean,” explains Hocking. “We checked it on different days. We would go on grey days and blue days to figure out which colours were going to be suited.”

Breaking up the pool and patio area is a long planter containing African irises, which were recommended by Horti-Tec. “They recommended them because it gets quite windy up there and they can withstand high windspeeds,” says the owner. “Floral would have been beautiful, but seasonal, and would probably have blown into the pool. This was a hardier selection and flowers pop every once in a while.”

Being able to enjoy al fresco evenings is essential during any Bermudian summer, and creative lighting has been used to bring the house to life at night. “There’s a lot of indirect lighting to create different scenes,” explains Hocking. “There’s lighting in the planters and we up-lit the cliff wall as well, making an interesting feature of the original quarry wall. It really brings out the texture.” There are also a variety of lighting styles on the walls and patio ceiling as well as on the face of the outdoor steps.

The best light of all, however, says the owner, is at sunset: “We get the back lighting from the sunset, which is almost more beautiful than an actual sunset—the pinks and blues popping in the sunset hours are incredible.” Extra ambience is provided by the zoned surround sound system, which is throughout the inside and outside of the house.

Even though Sunrising is a renovation, it doesn’t look like one. The way the old cottage has been incorporated into the new home is seamless and the owner was particularly pleased with how this turned out, as well as relieved that they didn’t have to knock down and start again. “Other than making way for expansion, they didn’t touch the existing walls,” he says. “The original cottage is still protected in the new build. It was so important to have a natural flow that didn’t feel like it was an add on.” Hocking was also pleased with the way all the social spaces connect together. “There is a very open living room and dining room, but you have a well-connected, but somewhat separated family den off to the side so you can entertain adults and kids all while having your own spaces. I like to mix that family atmosphere where everybody needs their own space,” he says.

The owner is a very active person, but even he can’t resist taking a moment from time to time to sit down, relax and enjoy his “busy view.” “The first thing that happens is when there’s a large container ship or large boat, the dogs go nuts!” he laughs. “That’s what I like—traffic, having good traffic—boats go by. There’s some incredible ocean views all over Bermuda, but I like the activity and changing landscape in front of me. It feels very peaceful.”

The nature of his life, however, means the peace rarely lasts, especially during the hotter months: “It’s a summer house. In the winter, the doors are closed, but in the summer time it’s wide open and kids are splashing in the pool and kicking the ball in the grass. It’s neighbourhood living. People are always coming over.”