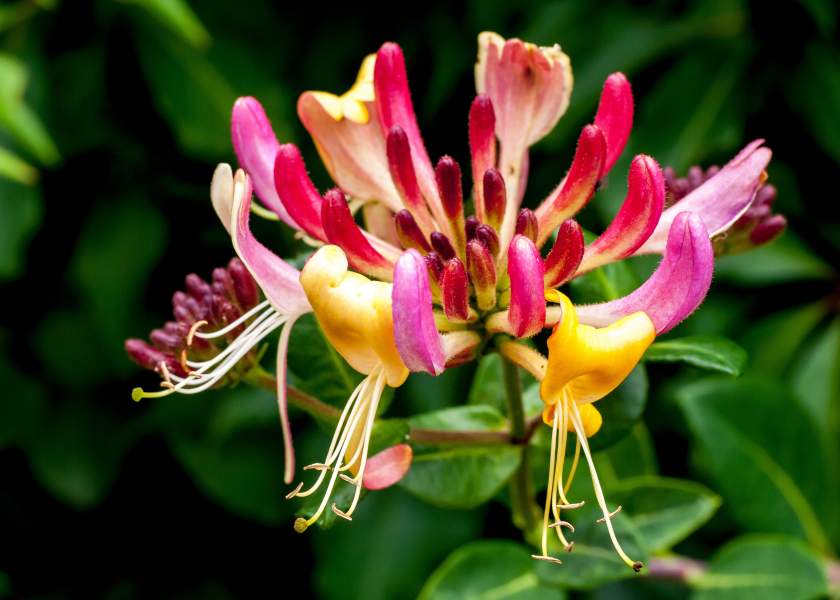 What to Pick and Plant This November

Elizabeth Jones on what to do in your garden this November – the essential blooms and crops to pick and plant this month.

Now’s the time red honeysuckle (lonicera sempervirens) twines its way to the top of our hedges, covering them with showy scarlet flowers, shaped like thin trumpets. Native to eastern North America and also known as coral honeysuckle, trumpet honeysuckle, or scarlet honeysuckle, this species is less invasive than the gold and silver variety (lonicera japonica, native to Japan and E. Asia) but offers a pleasing blaze of colour. Pick some cuttings to add flow to a table arrangement. Cloth of gold (galphimia glauca) is a shrub well named for its profusion of golden yellow small blossom that graces gardens in summer through fall. It should not be confused with achillea fillipendulinawhichin England is also known as cloth of gold. Other names of galphimia are just as pretty: golden thryallis, goldshower, slender goldshower, shower of gold, spray of gold, or rain of gold. It’s a perfect flower for a small arrangement on a meal tray. Ruellia (Brittoniana) is commonly seen in the wild and its purplish blue flowers are a welcome sight at this time of year, although the plant’s fast growing nature does make it in danger of becoming invasive. Oddly, it’s named after mediaeval French botanist, Jean Ruell who never saw one. Native to Mexico, and common in South America, North America, and the Caribbean, it’s also known as a Mexican petunia because of its similar shaped flowers. Another name is Mexican bluebell (not to be confused with morning glory, also called bluebell in Bermuda). The flowers come in white and pink as well but the blue shades are the most attractive.

Chives offer a more delicate alternative to onions and are great for garnishes in soups. They are also easy to plant from seed and need little attention. Sow seeds about 2 inches apart and no more than ¼ inch deep. Cover thinly with soil. Once seedlings emerge, thin so that plants are spaced between 4 to 6 inches apart. Water regularly.

Kale
Excellent in soup or as a side dish, kale is rich in nutrients. Space plants from 1 1/2 to 2 feet apart, Plant seeds about ½ inch deep. Fertilise soil with compost and water regularly.

Violas
Now is the perfect time to plant violas as they like the cooler weather of subtropical climates. Space plants about 6 to 8 inches apart. Plant seeds in soil about a ¼ inch deep. Violas begin blooming about 12 to 14 weeks after planting seeds. Water regularly and deadhead once blooms appear.