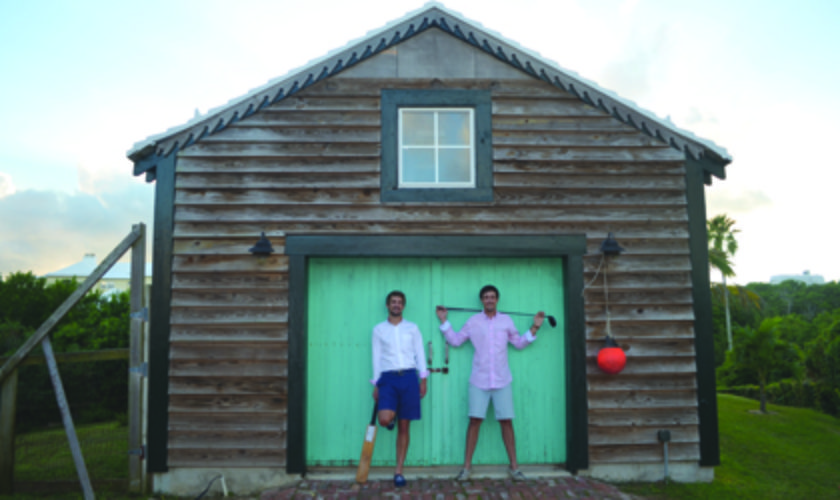 Less than three months since the first shirt was sold, orders are rolling in for the new men’s luxury sportswear company Coral Coast Clothing. But for two former insurance workers who quit their jobs to pursue their dream of starting a clothing company, it hasn’t been an easy road.

“The learning curve was steep, but we started by going to New York a year and a half ago just knocking on doors,” said Sam Outerbridge, who founded the company alongside his cousin Adam Petty. “We learned the hard way, paying for samples that weren’t very good and whatnot.

“The hardest thing to learn about New York is that nobody cares about what you’re doing or who you are. We were pushed out of a factory and delayed for three weeks because Mary Kate and Ashley Olson owned the place and wanted to use it.”

The local start-up deals in what it has been dubbed “BermudaWEAR…a modern take on classic designs that can meet the ever-changing demands of today’s fashion-conscious young professionals,” according to the website. Translated out of marketeer-speak, the brand is looking to take men’s sportswear out of an era founders Outerbridge and Petty believe has been defined more by utility than aesthetics.

“Everything you see in our clothes—these elegant nuances that you don’t immediately notice—is what makes Bermuda so beautiful,” Petty told The Bermudian. “Even the colour of the buttons is matched to the colour of the ocean.”

The idea is to give the jet-setters a wardrobe that can take them “from the conference room to the golf course and back.” Put simply, Coral Coast thinks men’s sportswear should match function with fashion, and it seems their target market agrees.

A casual glance at some of the shirt tags found around Coral Beach or the Mid-Ocean Club lately, and it’s obvious Coral Coast is striking all the right notes for the local country-club crowd, but Outerbridge and Petty are already looking beyond local shores.

“We wanted to create a world class product Bermudians could believe in,” said Outerbridge.

“Right now we’re using Bermuda as a prototype, to beta test essentially, because we’ve got a lot of our core market here. We want to really refine our supply chain and our designs here now, but in the next three years we want it to become a global brand,” said Petty.

What’s more, Coral Coast is a company with a conscience. Their clothes come from New York, not China, and a percentage of every sale goes toward the Bermuda Zoological Society’s charity Reef Watch.

“We want to have one of the smallest carbon footprints out of every clothing company,” said Outerbridge. “Everything about the product is ethical, environmentally friendly… even the packaging is recycled.”

If the two are right, and men’s sportswear has been stuck in a functionalism funk, we look forward to hearing a lot more about the two former insurance workers in years to come.