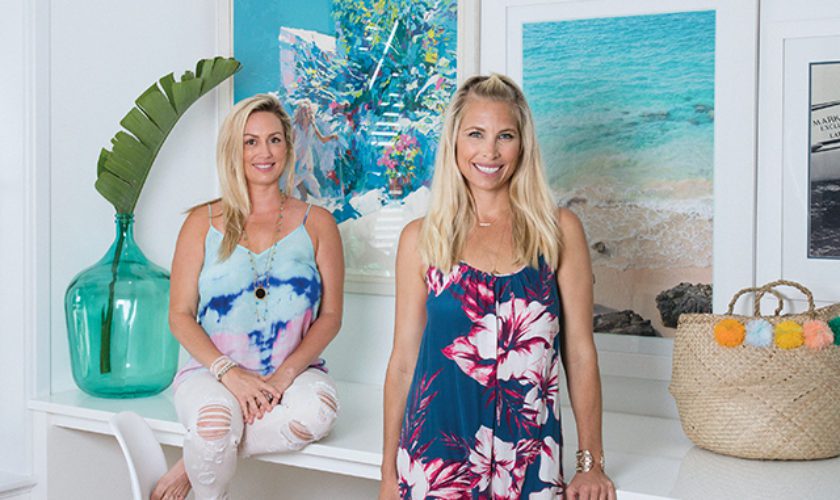 Looking around at Bermuda’s naturally vibrant colours and patterns, creative duo and HAMEC founders Patricia Borland and Cary Butterfield couldn’t help but feel inspired. “The florals, the palms, all the outdoor elements in Bermuda inspire us,” said Borland.

But there’s much more to the story of HAMEC than good friends designing island-inspired luxury resort wear. You might say that fate brought these two boarding-school friends back together after a chance reunion ten years later. Borland herself admits she believes everything happens for a reason, and she wonders if perhaps the only reason she went to that particular boarding school as a teenager was to meet Cary Butterfield.

“It really is amazing,” Butterfield agreed. “Trish is Bermudian and then I ended up marrying a Bermudian, and now we’re back here together doing this. We never would have imagined it!”

The two were reunited through their (now) husbands, eventually moved to Bermuda and started families. Despite the many years out of touch, Patricia and Cary picked right up where they had left off, not missing a beat. They even unexpectedly had babies within mere weeks of each other—twice!

“We both have design backgrounds,” said Butterfield, “so we’re both creative, and it just works. There’s really no head-butting despite us both being the creative types. We work really well together.”

The close friends often dreamed about designing a line of clothing together, but life happened and the project was put on hold during pregnancies, general family life and the passing of Borland’s father. Still, the pair said they continued to look to the idea of HAMEC as a much-needed creative outlet in the midst of day-to-day life.

Finally, just in time for Cup Match last year, their passion came to fruition with the launch of their first HAMEC collection.

HAMEC, by the way, is an acronym for the friends’ children’s names: Hunter, Ava, Mia, Elle and Cruz. They joked that it would become tricky if another baby ever comes along.

Borland describes HAMEC colours and patterns as “edgy foliage and vibrant prints.” The pieces are versatile in their equal ability to be worn comfortably to the beach or dressed up for a night out. The silk/cotton blend gives the clothes the breathability of cotton and the luxurious feel of silk.

In June, HAMEC will launch its much-anticipated second collection. This new collection includes 11 prints and styles with a more tailored look. The pieces will be made entirely in the US. Styles include a romper, jumpsuit, shorts, top and long dress.

While some fashion designers launch new collections several times a year, the HAMEC ladies said there was a good reason behind their more relaxed pace. Borland said, “We really took our time. We don’t rush our pieces because we are all about quality. We are very mindful of creating that ‘wow’ factor. Sometimes it takes a while to get it just right.”

She admits, “We’re not fashion designers. We just pick what we like, what we would wear, and people seem to like it. It’s really exciting!” And it’s true; the pair has an authentic knack for translating the beauty of Bermuda into truly wearable yet luxurious, versatile fashion—for any woman.

“The pieces can be worn on any body type and look effortlessly chic,” Borland said. “Women can be really hard on themselves, and we want to help them feel beautiful and confident. Love yourself. Be proud of who you are. That’s the HAMEC motto.”