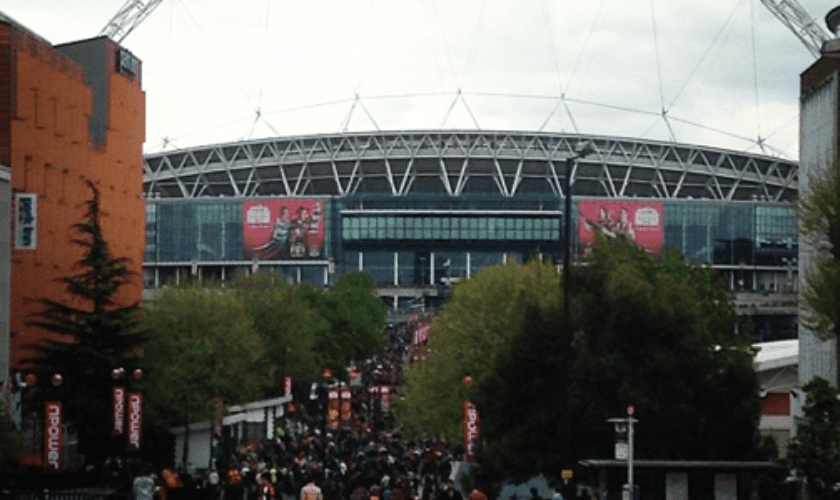 Hello from London! Presently I’m across the pond experiencing life as a Brit. I’m sure you’re thinking that I’m spending my days having tea with the Queen and brushing Kate Middleton’s hair as we chat about how she should decorate the royal babe’s nursery, but no, it’s even better: I’m indulging in Bermudian culture. As they say, when in London … do as the Bermudians do.

First up on the agenda for my friend Brittany and I was watching Nahki Wells and Bradford City defeat Northampton in the League Two Final on May 18 at THE Wembley Stadium. Along with 47,000 other fans, we shouted, cheered, clapped and celebrated Bradford City’s victory and Nahki’s title as “Man of the Match”. It was incredible watching Nahki play; the feeling of pride watching a fellow Bermudian run circles around the opposing players, managing the trickiest of foot work and sending the ball soaring past the goal keeper and into the net is insurmountable. Our arms ached from waving our Bermuda flag and our hearts soared when Nahki raised his own Bermuda flag when Bradford City were literally crowned the winners of the match.

If you’ve ever been to a football match in the UK you’re aware that it is the only time in life when it is acceptable for a man to sing for another man. The chants, songs and cheers all directed at their favourite players are hilarious. Proper English banter and insults aimed at the opposing team is also part of the football culture and I can’t help but share with you a few of my favourite quotes from the day. Put on your best English accent and imagine a middle-aged Englishman saying:

“Imagine being a Northampton fan 30 minutes in.” (Bradford City scored three goals within the first 30 minutes of the game, while Northampton had zero.)

“Good Lord, I’m going to get sick of cheering soon.”

“Don’t tell your mum ANYTHING!”

Congratulations to Bradford City and Bermuda’s own Nahki Wells. It was incredible watching you play and we look forward to seeing you in the future. Go City!