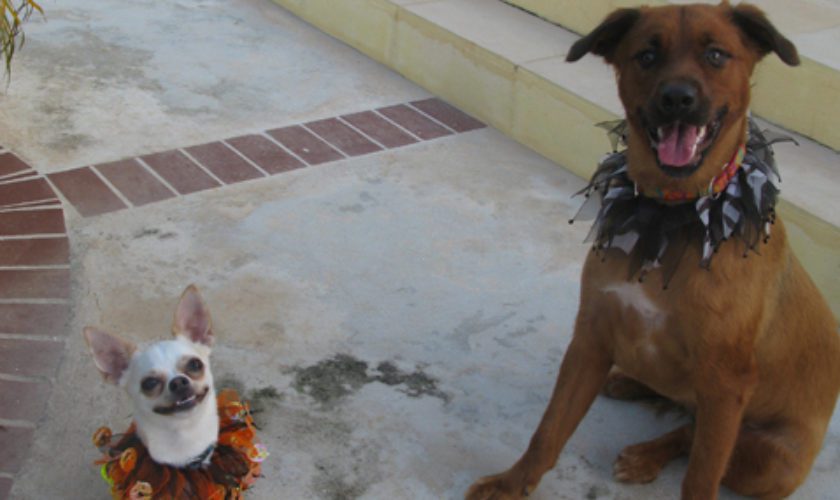 Howl-O-Ween Has Never Been Better…or Funnier!

I love Halloween! It’s one of my favorite celebrations. I love making a costume, dressing up and then showing off. I also love watching fools dress up in ridiculous costumes (some barely there) and trapse up and down Front Street like its just a regular Friday night.

I don’t shop for Halloween costumes; I prefer to make my own. When I was little, my Mom used to make the most elaborate and beautiful costumes that would quite literally, take your breath away. I think that’s why I just don’t feel right wearing a store bought Halloween costume, it’s just much more fun to make your own, particularly if you do it with friends.

We put together a similar piece for Crow’s Nest in the fall issue of The Bermudian with dog Halloween costumes on loan from Noah’s Ark. It was my job to round up some pooches and photograph them to accompany the copy but dressing dogs up for Halloween in August was a disaster.

I used my friend Meghan’s dogs for the shoot, a Chihuahua named Rio and an adorable mix-breed named Jasmine. Although Rio and Jasmine modeled the heck out of those Halloween costumes, they found it hard to sit and stay while Meghan and I were rolling around on the ground, dying of laughter! It was by far the funniest thing I had seen in a long time.

And it didn’t end there, we tried the Halloween costumes on a few other dogs and had the same effect, hysterical laughing! Seriously, now whenever I’m having a bad day and I’m in need of a good laugh I type dog Halloween costumes into google and I laugh until I cry.

Noah’s Ark have an endless supply of Halloween costumes and toys for dogs. Honestly, this is why Noah’s Ark are the best – they don’t simply supply the essentials, they supply all the fun stuff too! I don’t actually have a dog but I’m contemplating getting one just so I can dress it up for Halloween.