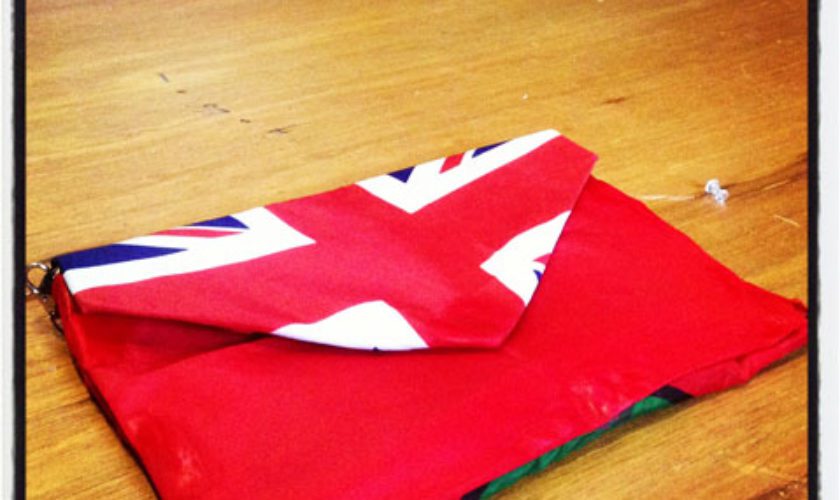 I promised I would post the instructions on how to create the Bermuda flag purse (photographed below) for yourself. I DIY’d this bag for a Bermuda Day party in London and it was so simple and easy to make and it looks absolutely fabulous!

What you will need:

Leather (or plastic, anything that will adhere to superglue) purse

Step 2: I started with the front flap (I recommend that you do too, if the purse you’re using has a front flap). I traced around the flap, leaving 2-3 inches on each size (to fold under the flap). I then used the superglue to adhere the flag onto the purse. I made sure to only glue the underside of the flap as much as I could but couldn’t escape one big blob of glue on the front (don’t worry, we get rid of this later.) Make sure you are pulling the fabric taught and keeping the piece centered and even on both sides. TIP: Use a bobby pin to hold your fabric and purse together while the glue dries, this way, you won’t get glue on your fingers – just be careful the bobby pin doesn’t get stuck!

This is what the front looked like when I had completed it.

And here is what the back looked like after I had finished the front flap. Notice how I left the frayed ends of the flag – these will be covered over with my next section.

Step 3: As I said, I used the crest for the back of the purse. I lay the bag down on the flag and traced around it, leaving 2-3inches of extra spaces for folding and gluing. Keep in mind that you will want the crest to be centered, so plan and measure it that way.

Step 5: For the top section of the back of the purse, fold the top of the fabric under and glue that way, to create a seamless edge. See photos below.

Step 6: I then moved onto the front of the purse and worked on the section under the front flap. Although this was an easy rectangle, I had to fold each side under to create the seamless edge. This part gets slightly tricky and quite messy but any imperfections can be fixed. I didn’t take a photo of this part but it’s pretty simple to imagine.

And voila! Here is the finished product! Not to difficult and it’s the perfect accessory for any Bermuda-themed fete!