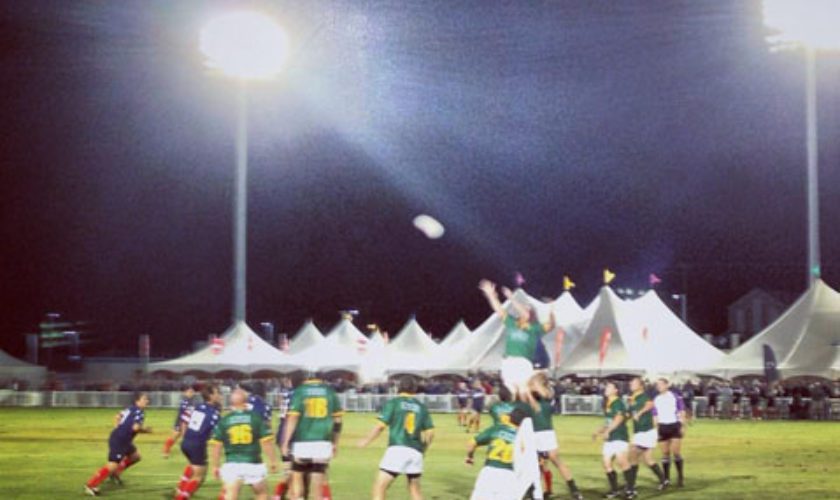 Going to the rugby is like taking a trip to Vegas: It’s going to get absolutely ridiculous but no matter what, the shenanigans that arise are never allowed to be spoken about ever again.

There’s drinking, dancing, outrageous costumes and the game, which no really pays attention to. The game pretty much a side- show, it’s only real purpose is to make it seem as though attendees are there for sport, which of course they are not.

The World Rugby Classic has been raising hell for the last 25 years. Throughout it’s history, teams have come from far and wide to play in Bermuda. I’m not actually sure what they win. Maybe it’s a trophy, maybe it’s a bottle of Black but whatever it is, these guys work hard for it.

We headed out to the rugby last night to catch the match between the United States and South Africa. Not knowing much about rugby is besides the point because no matter how exciting the game is, everyone is secretly waiting in anticipation for it to end so the drinking can begin.

Nevertheless we took our place in the bleachers and watched the game unfold. I don’t know if anyone else has noticed but there seems to be a lot of touching going on in the game of rugby. I envision what it would be like if it were the Bermudian men playing: “Man, don’t touch me there!”, “Can I get some longer shorts, these don’t even cover my boxers?”, “I had a late one last night so I ain’t trying to go hard.”  I think this is why we fly the rugby players in, our Bermudian men just couldn’t handle it.

After the game ended, we grabbed a few drinks and headed for the entertainment tent where DJ Choice played all the songs synonymous with the World Rugby Classic, “Sweet Caroline” anyone?

From there everything seems to go downhill.

Obviously sitting on eachother’s shoulders is a thing at rugby. Don’t ask me why but everyone is doing it.

Two words of advice when attending rugby this year, one: dress warmly. Two, arrive by 9:15pm if you are general admission. There will be no ticket sales after 9:15pm, which means that if you don’t already have one, you’ll be locked out and forced to scale the surrounding fence. Just kidding, no one’s doing that.

There are only two nights of the World Rugby Classic left! Make sure you head down there either tonight or tomorrow night (or both if you’re feeling particularly frisky!). General admission is $25 and drink tickets are $6 a piece. For the full schedule of matches as well as additional information, click HERE!