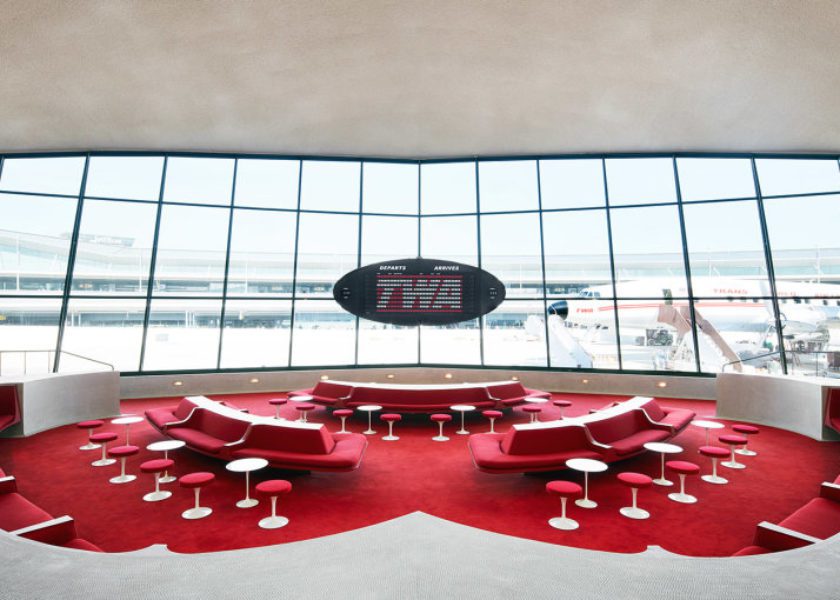 My iPhone alarm went off promptly at 5:00 a.m. I lazily gazed over my shoulder and greeted the Jet Blue fleet—clear as day, through floor-to-ceiling windows. As the sun rose, I relished the fact that I had slept peacefully under a plush down comforter while planes took off above me—and landed on the runways beside me—at JFK International Airport’s Terminal Five. Was I dreaming? I was steps away from my flight to Bermuda.

Feet on the floor, I readied myself for departure without unnecessary haste or stress. Relieved that I did not have a lengthy trip on the Long Island Expressway before me, I donned a pink and blue dress (in sync with Bermuda’s brand), put finishing touches on my pink lipstick in front of a Hollywood-style mirror and bid farewell to the fleet outside my window.

Boarding an elevator, I descended to the upper lobby where a futuristic red “passenger tube” would usher me into the lobby of the decadent new TWA Hotel. As I entered the magnificent historic structure, seeking the aroma of hot coffee, I was struck by the ambient sounds of Frank Sinatra echoing throughout the building. It stopped me in my tracks. I felt like Doris Day.

When Trans World Airlines ceased to fly in 2001, the magnificent TWA flight terminal at JFK International Airport was closed—left vacant until the hoteliers of MCR/Morse Development cleverly sought to re-purpose the original terminal building into the first-ever hotel on the grounds of JFK International Airport. Their concept would involve bringing back mid-century modern design and the Jet Age for the modern traveller.

The iconic TWA Flight Center at JFK was designed back in 1962 by Finnish architect Eero Saarinen. Evoking simplicity and boldness, like a powerful Marimekko textile, the terminal is spellbinding for those who appreciate architecture and design. The light, the lines and the flow are all marvels to the eye, in keeping with the building’s historic landmark status. Everything in the building has been recreated as if it were 1962—including banks of pay telephones requiring a dime. 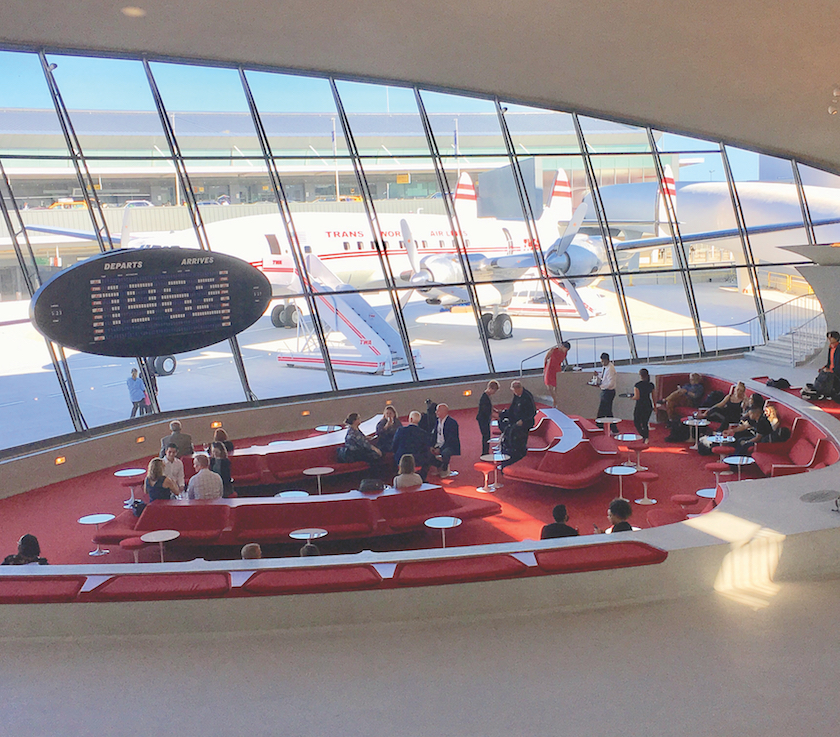 Newly opened in May, adjacent to Terminal Five, the TWA Hotel represents serendipity for travellers heading to Bermuda on early morning flights. Passengers travelling on Jet Blue need only walk through a passenger tube to check in for their flights. Those flying on Delta Airlines can opt to walk through Terminal Five, or hop on an air train to neighbouring Terminal Four.

Upon arrival at the TWA Hotel, you are immersed in a vintage experience, with the renovated TWA Flight Center as the focal point. On either side of the lobby, the hotel features wings of hotel rooms commemorating the architect Eero Saarinen and the owner of the airline, Howard Hughes. Guests check in to the hotel via kiosks in the hotel lobby, and must plan to handle their own luggage, as there are no bellmen on site. Boasting a total of 512 hotel rooms—all new construction, price points start at $249 per night, and one can choose to upgrade to a room with a runway view, which is well worth a few extra dollars.

On ascending the central staircase in the refurbished historic TWA Flight Center, one can relax in the atmospheric Sunken Lounge while gazing at an authentic 1958 Lockheed TWA aircraft, that sits outside on the tarmac. Constellation, or “Connie” as she is referred to by TWA, has been refashioned, with its historic integrity intact, as a cocktail lounge—complete with flight attendants at your service. Reservations are required in advance via the internet, due to the limited capacity on board.

Although the hotel has plans for multiple bars, restaurants and retail establishments, The Paris Cafe is the first hotel restaurant to be open for a seated meal during breakfast, lunch and dinner. A collaboration with famed French chef Jean-Georges Vongerichten, the cafe does not feature a French menu, but rather a selection of diverse entrees, including family-friendly hamburgers and tacos. 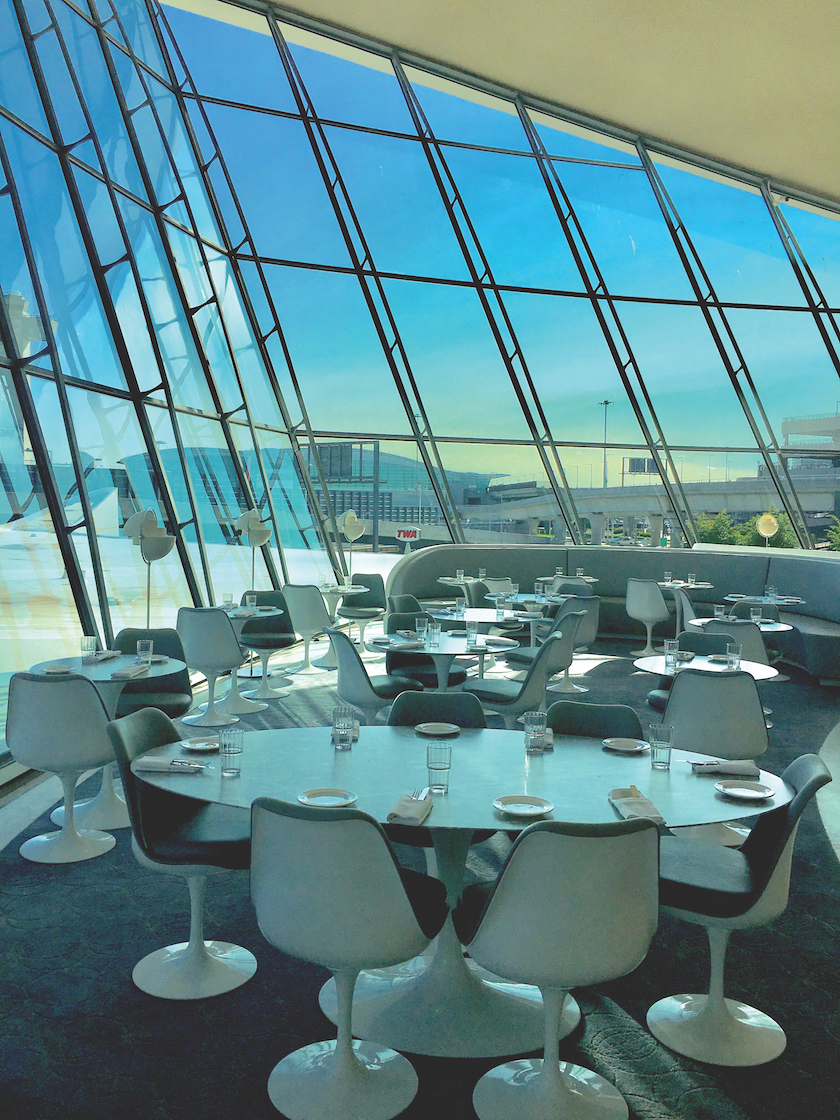 The structural design of The Paris Cafe and the ambience within the room are both striking—particularly at night, when the air traffic control tower is illuminated in the distance. Prominent design features include floor-to-ceiling glass and a circular fluidity in the structure—both of which create a sense of motion and wonder. Brand new furnishings evoking the 1960s and retro glassware inevitably bring Mad Men to mind.

My double guest room at the TWA Hotel was adequately sized with a jaw-dropping view. Delights included a working rotary telephone, a full martini bar and an original copy of Life magazine featuring John Glenn—the ultimate grace note! TWA branding is omnipresent on pads, pencils, glasses and toiletries. Suffice it to say that no detail was spared in luring hotel guests to time travel—including the colourful vintage TWA travel posters in the hotel lobby by famed illustrator David Klein. 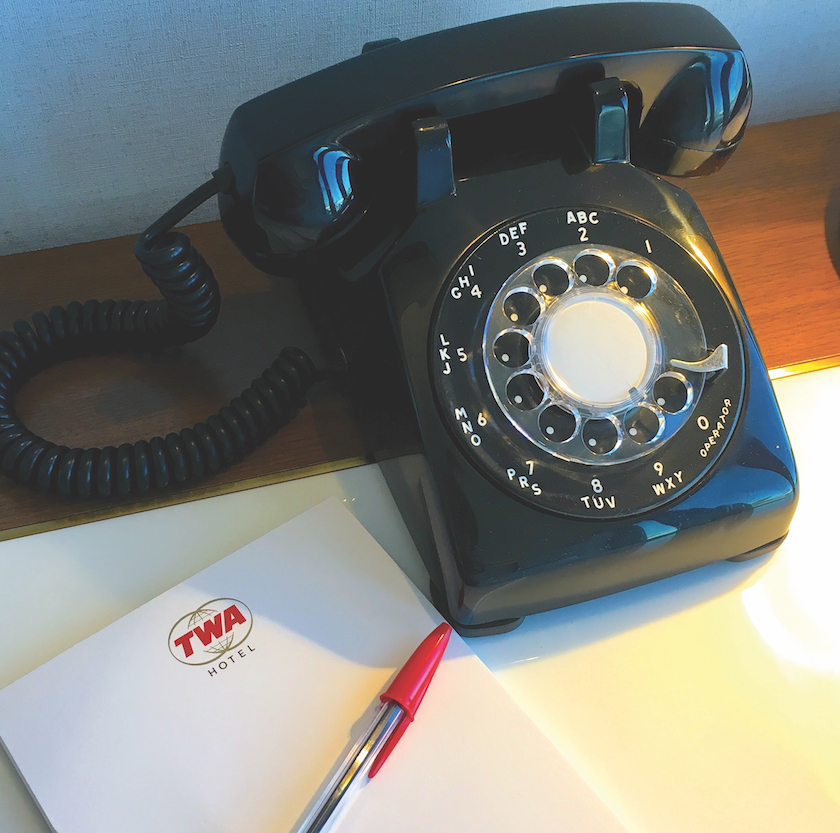 The TWA Hotel is designed to be a transient destination; frequent guest turnover is the rationale for skipping closet space in favour of the retro minibar. Fortunately for travellers who have significant layovers at JFK—or need to have privacy to conduct business—there is a day-stay option at the TWA Hotel at a reduced rate. Check-in for overnight guests begins at 4 p.m. here—a bit later than the average hotel.

Additional amenities at the TWA Hotel include a state-of-the-art gym that will be open 24/7; 50,000 square feet of meeting space for business travelers; a charming museum display of TWA historical artifacts and memorabilia curated by the New York Historical Society; and the piece de resistance—a rooftop bar with an infinity pool overlooking active jet runways. Upon arrival at the Pool Bar, which abuts international runways, guests must comply with security measures by emptying the contents of their handbags into translucent totes. The observation deck is 10,000 square feet with a 63-by-20-foot infinity pool running along the periphery of the deck. Pool designers opted for “beach entry” and underwater seating for flight watching with libations in hand.

I sat in a chaise lounge on a plush red TWA towel watching a happy couple sip cocktails in the water. A Jet Blue employee explained to them the technical nuances of departures and arrivals.

Despite the proximity to the tarmac, the noise was less than I had expected. However, the winds did blow—causing me to think, “This is the perfect occasion for a dark n’ stormy!” With travellers to Bermuda coming and going, Black Seal will be a must.

A reincarnated structure with modern technology utilised to the hilt, the TWA Hotel does not replicate 1962-level customer service across the board, despite period dress on staff and drink menus from yesteryear. Check-in and baggage transport are the responsibility of the guest. In addition, room service is not provided. Moving forward, the hotel will undoubtedly incorporate the perspectives of its initial guests, clarify the signage through the vast hotel to enable easy way-finding and perfect its customer service for a top-flight experience. What fun it will be to see this place blossom! 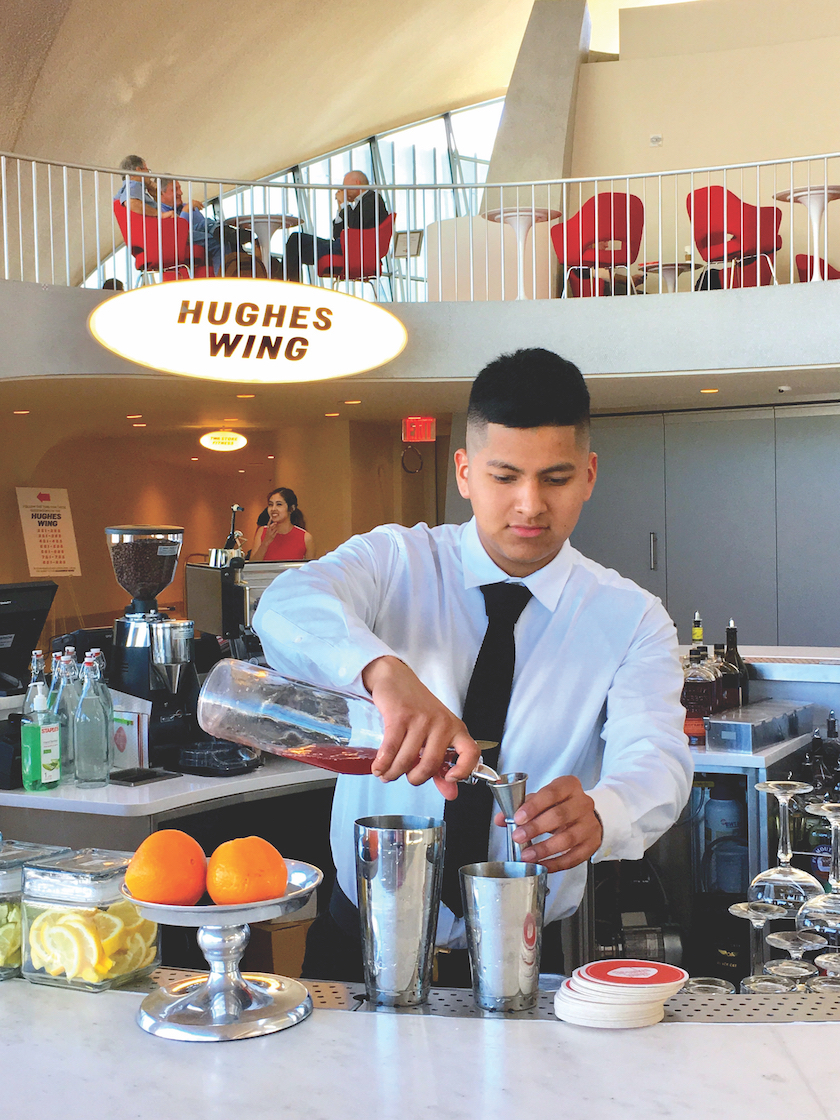 As a resident of Eastern Long Island, I am accustomed to travelling more than two hours to JFK International Airport each time that I fly out to Bermuda—typically on a flight that boards in the early hours of the morning. Having now had the opportunity to sleep within sight of jets, there will be no more travel math for me!

The newly opened TWA Hotel is already an icon. Bedecked in classic red and white accents, the architectural marvel radiates the historic excitement behind travel. Designed with impeccable detail, the hotel represents an era when travelling was elegant—when boarding a jet was not merely a means to an end, but itself a destination. 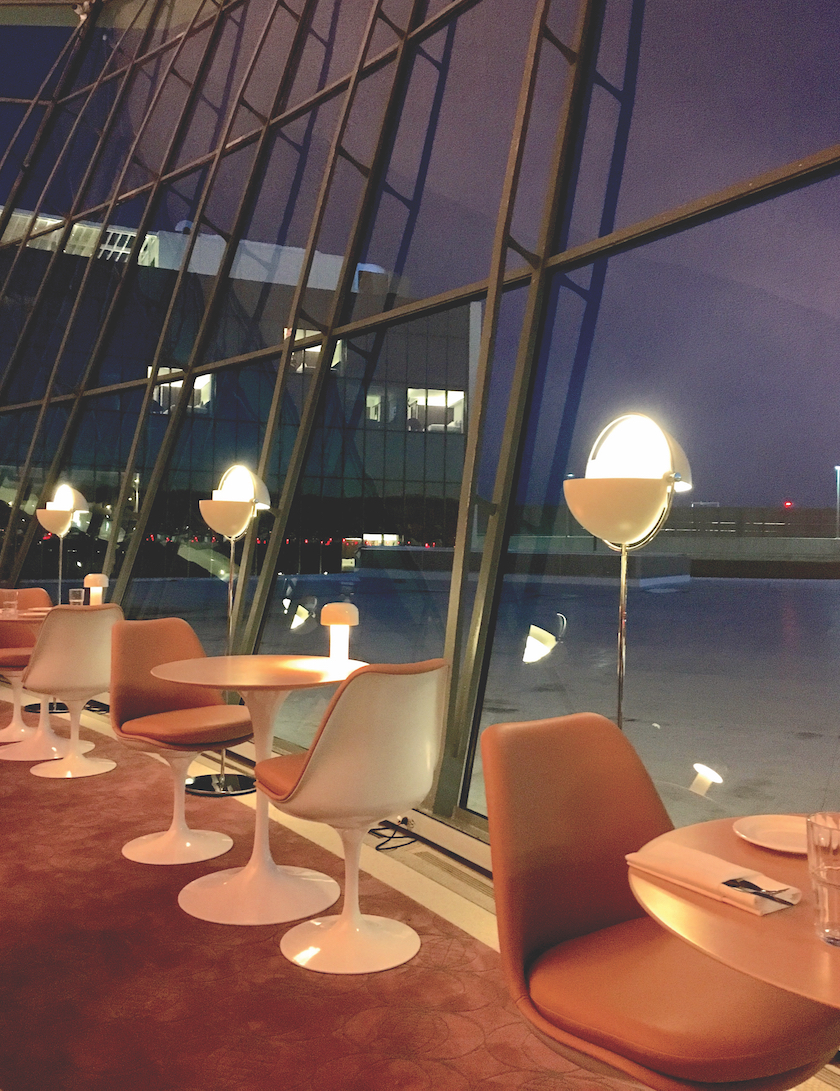 Time travel has officially arrived at Terminal Five, thanks to the jet stream behind the TWA brand. Travellers: please retrieve your love of nostalgia and other personal items prior to exiting the hotel. Please utilise care, as dreams of retro-hospitality can shift during the night.