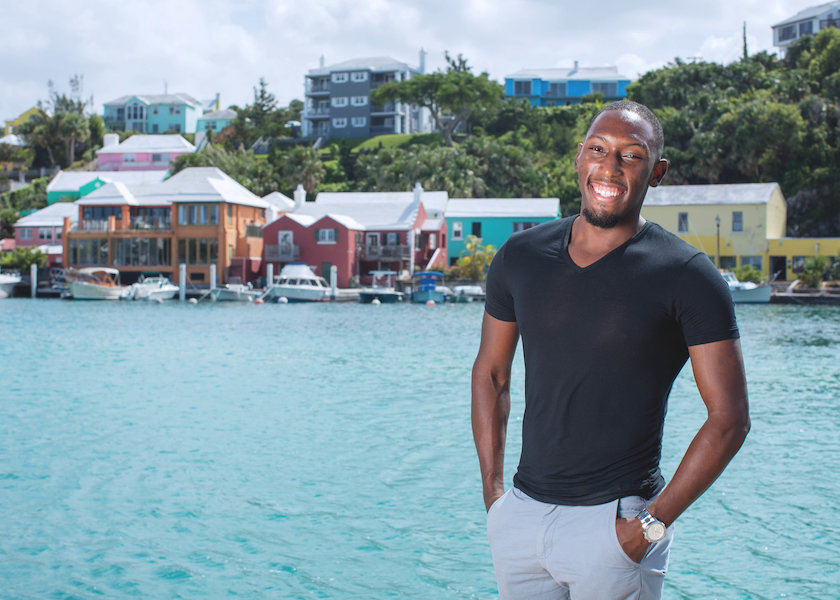 Winston Godwin is an Aquarist at the Bermuda Aquarium, Museum and Zoo. In 2016, Winston and his then fiancé, Greg, fought and and won their case to legalise same-sex marriage in Bermuda. Because of his social activism, he was also named by The Bermudian as one of the five most influential Bermudians of the Year in 2017. In his free time, Winston enjoys working out at the gym, spending time with his husband or enjoying the outdoors, typically in, on or under the water.

1. Where is the best place for sushi?
Misaki! I love the pick and mix concept they offer. The staff there are also incredibly warm and welcoming!

2. What’s the most Instagram-worthy place in Bermuda?
Abbots Cliff. Many haven’t made it out there and I think it’s one of the most unique vantage points Bermuda has to offer.

3. What’s the biggest obstacle you’ve overcome?
2011 was easily one of the toughest periods for me. After coming out to my family, I was the most free I had even been, but also quite possibly the most conflicted. The point when someone decides to live their truth is extremely liberating, but when that truth doesn’t coincide with the vision some family members have for you, there’s a struggle that exists that you have to fight, and ultimately you have to realise whose life are you living and whose life you should be living.

4. What’s your favourite thing to do on Sunday?
Sundays are the only day my husband and I have off together, as I typically work Saturdays. So Sunday morning sleep-ins, coffee and cuddles, followed by heading to the gym are my favorite things on a Sunday.

5. What’s your favourite beach?
Cooper’s Island. From growing up to now, I’ve spent a great deal of time planting trees and building long tail “igloos” and I even got engaged there! It will always hold a special place in my heart.

6. What was your first job ever?
When I was around the age of 10, my dad hired my sister and me to clean the car. Little did I know that when he said 10 dollars he intended for my sister and I to split the 10.

7. Who was your favourite teacher as a child?
For me it’s hard to pick just one. I think in my early years there were a couple that were influential in various capacities. When I look back, Kay Latter, my 4th year teacher, helped ignite my passion for the environment, something that has become so integral in my life. Rosie Doughty, in my 5th year at Saltus, was someone who was also extremely memorable for me. Lastly, JP Skinner, who spearheaded Waterstart, a marine education program that worked to inspire young minds and develop a love for the marine environment. It was through this program I obtained my scuba license and met so many like-minded people over the years.

8. Who was/is the most influential person in your life?
I would probably have to say my father. Like most, not all the experiences we’ve shared have been positive. But I think it’s hard to argue that they weren’t influential at the very least. Ultimately, whether it was all intentional or not, he shaped the man I’ve become today.

10. What’s your favourite thing in your office?
The sharks, turtles and seals!

11. What’s your favourite thing at home?
My husband!

12. What are you reading right now?
I’m currently re-reading the Harry Potter series. I started it on a whim and was determined to finish them all again! After that, I’m hoping to read Culturism: Why African-Americans Must Stop Blaming Racism for Their Problems and Start Taking Full Responsibility.

13. What is your guilty pleasure?
The Real Housewives of Atlanta. I blame my husband!

14. What is your biggest phobia?
I think my biggest fear would be regret. By regret I mean simply not taking advantage of opportunities that I think may help develop me as a person. The “should of, would of, could of” would be something that would plague me, I think.