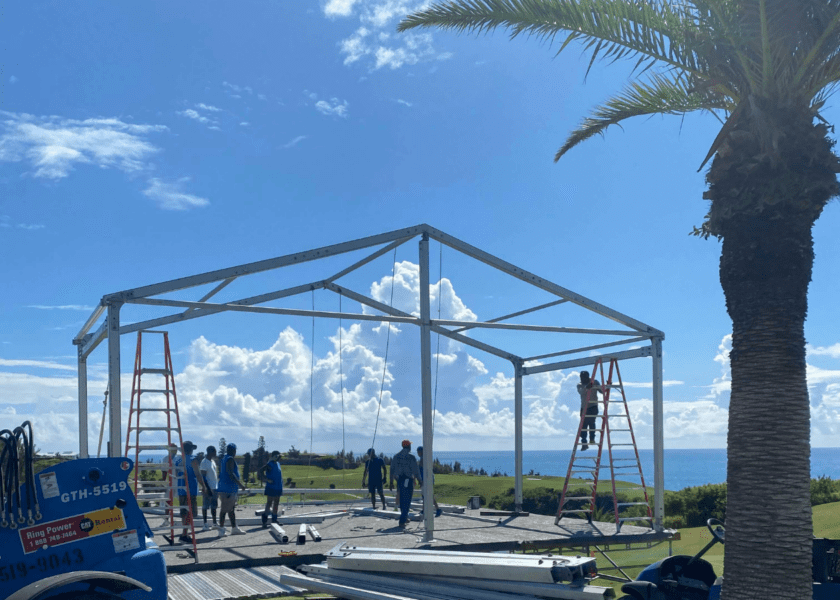 Behind The Scenes: The Island Vendors Who Make The Championship Possible

The Butterfield Bermuda Championship is a huge logistical exercise. Creating a venue fit for a PGA Tour event and catering to the needs of the hundreds of spectators, sponsors, media and players who descend upon the Port Royal Golf Course involves a huge and coordinated effort.

From the tent-supporting scaffold to the portable toilets, from food and beverages to transport and communications, local vendors play a critical role.

In 2021, more than 50 local businesses and organisations were recruited to help out. In total, the Championship has paid out some $7 million to local vendors during the event’s first three years.

The cashflow boost for local enterprises for has grown as tournament organisers have come to know the island better, said Danielle Baiunco, operations director of the Butterfield Bermuda Championship.

“For the first tournament in 2019, we had a very short runway — only four months to plan, so we had not yet built many relationships on island,” Baiunco said. “The more people we met, the more we learned that were many businesses on island who could provide us with what we needed.”

In the run-up to the second event in 2020, as Covid-19’s effects strangled the tourism industry and left thousands out of work, tournament organisers made a conscious effort to do their bit to help the local economy recover.

“Our focus was on how we could directly impact the community,” Baiunco said. “The economic impact reports show impressive numbers, but many people were asking us, ‘Who do you spend your money with?’ So, we really tried to establish a vendor programme on island to increase our direct, rather than indirect, impact.”

Even in the example of one major, specialist item that needed to be brought in from overseas — the hospitality tents supplied by Florida-based event tent experts Tentlogix ­– the Championship has found ways to increase local involvement.

“When we have to use an overseas vendor, then we try to use local labour,” Baiunco said. “Last year, the large tents came over from the US with two people from the company. Ten individuals from a Bermuda company, Undercover Tents, worked with the two project managers. They worked really hard, and had the opportunity to learn the engineering behind these tents.”

When one local vendor cannot provide what is needed, they often direct the tournament to another who can – and the result has been a growing network effect.

Despite Bermuda’s small size and limited experience with large-scale sporting events, Baiunco said the island’s businesses had consistently met the international standards required by the PGA Tour and some had made remarkable efforts to deliver.

One example was scaffolding company Leggo Ltd., run by Bermudian co-owners and operators Ben Dier and Brian Hall. Scaffolding forms the skeleton of the huge hospitality tents at the tournament – getting the specifications exactly right is critical.

“The guys from Leggo got on the phone with our tent supplier in the US and then they built a mock-up in their parking lot to show they could create whatever scaffold the tent company needed,” Baiunco said. “Everything went without a hitch and Leggo provided the scaffold for all of our tents last year.

“Not only are we trying to give this business to people on the island, but these vendors are great – they’re fantastic to work with.”

Another example was long-established, event-planning firm Select Sites Group, which is owned by Chris and Starla Williams. In 2020, tournament organisers visited the SSG warehouse to discuss the potential to do business.

“We saw that they had a lot of material,” Baiunco said. “Chris offered that ‘if we don’t have exactly the furniture you’re looking for, then let me build some new product for you’. He custom-made all of the furniture used in the Ocean Club tent last year.

“Knowing that we’re going to be here for many years to come, he will get a return on investment by renting it out to us and use it for other events too. We want to be a good partner to our vendors and we’ve seen that they are willing to grow with us, which is very refreshing.”

Meals from MarketPlace, rented electric cars from Current Vehicles, wifi services from Digicel, engineering services from OnSite Engineering, accommodation from several hotels and cottage colonies – the list goes on. Numerous enterprises in many industries will be hoping that the Butterfield Bermuda Championship remains on the island’s sporting calendar for many years to come.