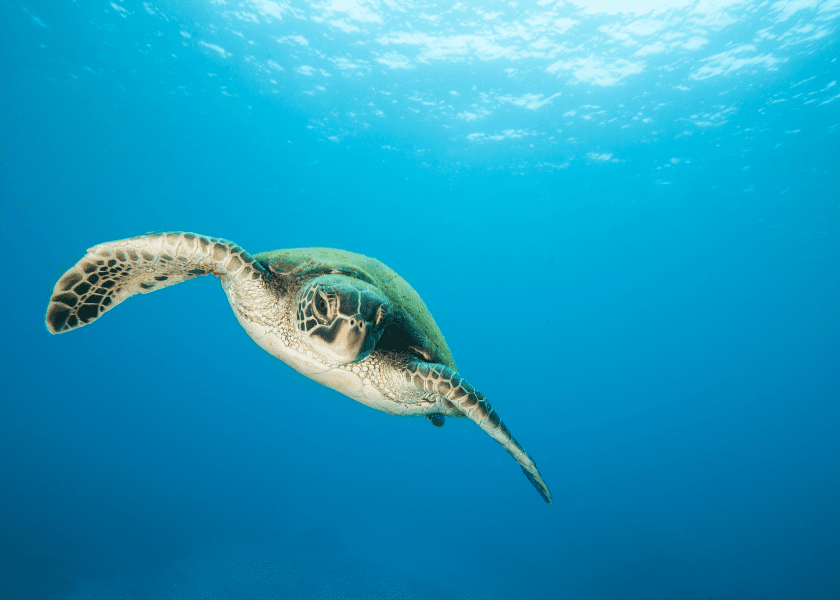 In the second of a four-part series exploring the issues and initiatives which impact Bermuda’s ocean and sea life, The Bermudian speaks to David Godfrey, executive director of the Sea Turtle Conservancy, about the effect of climate change on Bermuda’s sea turtles, in particular their sex ratios.

Sea turtles are fascinating creatures. A majestic species as old as the dinosaurs, Bermuda’s nesting turtles were eaten into oblivion by the 1930s and, in spite of extensive conservation efforts since, they remain an endangered species.

Worldwide, they are vulnerable to entanglement in fishing gear, consumption and illegal trade of eggs and meat, coastal development, plastic and other marine debris, and the turtle shell trade. More recent research, however, has shed light on the detrimental impact that climate change is having, most notably that a warmer climate has resulted in increasing numbers of female turtles.

“Sex determination in sea turtles is temperature dependent during the incubation process,” explains David Godfrey, executive director of the Sea Turtle Conservancy. “As the nests are incubating, at a certain phase the temperature of the nest determines the percentage of the eggs that will become female and the percentage that will become male. As temperatures rise on nesting beaches in Tortuguero and Florida, you have situations where more, if not all, hatchlings from a given nest are female.”

Tortuguero National Park in Costa Rica is a major nesting site for some of the green turtles that later travel to Bermuda, along with beaches along the east coast of Florida, Mexico and some islands in the Caribbean. After hatching on these beaches, they drift around in the Atlantic, floating in the sargassum until they are around five to seven years old, at which point they navigate to foraging areas such as Bermuda where they feed and reside in the shallow, nearshore waters. It is here that they grow up, maturing from juveniles into young adults.

Increasing feminisation is occurring among all seven species of turtle around the world. Godfrey cited research by Dr Jeanette Wyneken on the southeast coast of Florida where tests on hatchlings and the remains left in eggs found some nests to be one hundred percent female. A separate study in Australia, published in January 2018 in Current Biology, found that 99.1 percent of juvenile green turtles born on the northern Great Barrier Reef nesting beaches were female. For the cooler southern Great Barrier Reef, the percentage was between 65 and 69.

The same is happening in Tortuguero where for over fifty years, Godfrey says, “we’ve been randomly placing temperature devices at the bottom of the nest and it records the temperature constantly.” Throughout the incubation process, the temperature is measurably higher than it used to be. “If the temperature is increasing then the number of females being produced is increasing,” he adds. “The juvenile turtles growing up in Bermuda therefore are also becoming more female.”

The exact percentages and rate of change among Bermuda’s turtles is not yet known, but Drs Anne and Peter Meylan, scientific advisors to the Bermuda Turtle Project, have been studying Bermuda’s green sea turtles for around thirty years and will be articulating their sex ratio findings in a forthcoming paper. A sea turtle’s sex organs are internal, so in order to determine the sex of a turtle in Bermuda waters, scientists examine the gonads by doing a laparoscopy. This means they look inside the reproductive organs with a small camera. Alternatively, they can draw blood and run hormone analyses on the blood.

What impact could an increasingly female population have on Bermuda’s sea turtles? “Obviously, there is a high level of concern if there become too few males in the population to sustain reproduction at a healthy level,” answers Godfrey. “The challenge is not knowing exactly when that problem occurs.” On the plus side, he explains, sea turtles are not monogamous creatures. Both males and females are “opportunistic breeders” and will mate with multiples. “If the ratio, theoretically, is ten to one, the male could have no problem reproducing with all those females, but what if the ratio is fifty to one, or worse? If the trend keeps going, we will get to the point where females simply can’t reproduce. It’s unknown when the crisis begins.”

Godfrey says that up until about ten years ago, the nesting population in Tortuguero had been growing, but is now in slight decline. “It’s not dramatic, but it’s not growing and the number of turtles coming back to nest is going down.” He emphasises, however, that the cause of this decline is uncertain because, for example, turtles are being harvested in large numbers in Nicaragua, but it “raises the prospect that we are already seeing the effects of the feminisation of the Tortuguero population.”

Unfortunately, climate change isn’t just negatively affecting the sex ratio of sea turtles. Higher temperatures are to blame for the reduction in seagrass, which is the main food source for green sea turtles, and rising sea levels and stronger storms are devastating to their nesting habitats, especially in Florida where people are building sea walls to protect their property. “We are already seeing fewer green turtles in Bermuda and not just because of sex ratios, but also food availability,” says Godfrey. “Rising temperatures in the sea will drastically affect seagrass, especially in Bermuda because it is an outlier for where seagrass occurs. It is the most northerly habitat for green turtles. Subtle changes can dramatically affect a species right on the edge of where it’s viable.

“More algae blooms are caused by rising temperatures. These block the sun from reaching the bottom. In Bermuda, seagrass at the deeper depths started to disappear first. If the sun is not reaching the bottom, you see the seagrass die into oblivion.”

Climate change is a global crisis requiring a global response, but what does that mean for sea turtles in the long term and what can we, as individuals, do to protect one of our most precious sea creatures? There are actions that organisations such as the SCC can take to manipulate egg incubation temperatures, such as building shade structures on the nesting beaches or moving the eggs to a cooler place, but Godfrey believes more research is needed before humans intervene.

Past experience has shown that human manipulation can be unsuccessful and even have negative ramifications. Also, he adds, “from a philosophical standpoint, an animal that has existed and thrived for two hundred million years should not have the most important part of their life phase—reproduction—dependent on homo sapiens turning up.” Evaluating our behaviour and how it negatively impacts the marine environment is a good place to start, says Godfrey. “Think back to Bermuda before mankind settled here. The waters were super clean. There were lots of turtles. Lots of seagrass. A very healthy marine environment. Now you have lots of people, lots of cars, lots of boats, lots of septic tanks, agriculture, lots of runoff from land to the marine environment. In a hundreds-of-years time frame, we have dramatically affected the habitat around Bermuda.”

Godfrey suggests that everyone should look at how they can decrease their carbon emissions, stop littering, fix a leaking septic tank, don’t scream a boat through the flats and use less plastic. “At an individual level, we can all make choices to affect change and we elect people to make decisions that effect the natural world. It’s important to be led by people who share our ideals.

“Nature will absolutely find a way to survive,” concludes Godfrey confidently. “I think you’ll see changes in the population over time, possibly changes in where they nest. Changes in where some of the developmental habitats occur. Turtles have been around for nearly two hundred million years. Lots has changed in that time and turtles have adapted, surviving the great die-off of the dinosaurs. I don’t think we’re going to cause turtles to disappear.”