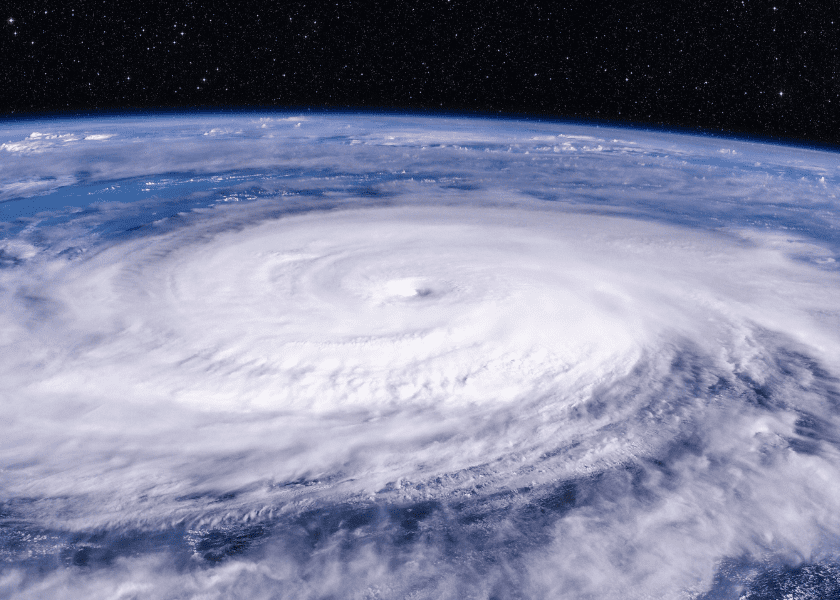 How is climate change impacting Bermuda? In the third instalment of The Bermudian’s year-long environment series, we look at what steps we need to take now to prepare for what’s coming.

On September 3, 2019, we watched in horror as photographs and videos began to emerge from the Bahamas in the aftermath of one of the most powerful and devastating Atlantic hurricanes on record—Hurricane Dorian. This coming just two years after Category 5 hurricanes Irma and Maria caused similar devastation to the Leeward Islands, Greater Antilles, Puerto Rico and other parts of the Caribbean.

Is climate change to blame for these more powerful, slower-moving and wetter hurricanes? Do we have to accept that this is the “new normal”? Will Bermuda be next and, if we are, are we prepared for the consequences?
Last year, Dr Mark Guishard, director of the Bermuda Weather Service, wrote a report for the Bermuda Institute of Ocean Sciences (BIOS) called “Climate Change and Atlantic Hurricane Risk” in which he directly addresses these questions. In making a connection between warmer waters and stronger winds, he references a 2013 report which states “upper ocean warming was of the scale of 0.11°C in the period 1971–2010,” and quotes further research which “found that hurricanes at their highest intensities are on average 15 knots (10 mph or 28 kph) stronger for every 1°C of warmer sea surface temperatures.”

Speaking today to The Bermudian, Guishard warns that “while Category 5 hurricanes have not been recorded to impact Bermuda, we have seen an increase in major storms in the last 20 years, and notably, some ‘Cat 4s’ have come close enough to cause concern during the first two decades of the twenty-first century.” So far, in living memory, Bermuda has not yet experienced a direct hit of a Category 4 storm, so it is difficult to know exactly what kind of an impact such an event would have on the island but, points out Guishard, there have been some notable cases in the last decade that have come close.

In 2016, Hurricane Nicole approached Bermuda at Category 4 status before weakening back to Category 3 just before impact; in 2019, Hurricane Humberto was just shy of Category 4 intensity during its closest point of approach to Bermuda; and Hurricane Ophelia, in 2011, passed around 120 nautical miles to the east of Bermuda as it was intensifying to a Category 4. “These storms highlight the possibility that Bermuda could reasonably see an impact from a Category 4 storm in the near future,” he says. “Upper ocean temperatures have been warming through the decades, and as warm water is the fuel for hurricane formation and strengthening, the potential now exists for storms that cross that intensity threshold to reach Bermuda.”

Another major concern is not just the wind speed, but heavy rainfall and the fact that, according to Guishard, recent research has found that tropical cyclones have been slowing down in forward speed, thereby prolonging the duration of the storms’ effects.

“Hurricane rainfall is increasing, as rising average air temperatures enable more evaporation of water vapour into the atmosphere,” he explains. Heavier rainfall and the resultant flooding were particularly devastating in Texas after Hurricane Harvey in 2017 and in the Carolinas after Hurricane Florence in 2018, but Bermuda’s landscape and building codes are different so would the impact still be the same?

“Bermuda does not have river systems, so the flooding from rainfall thus far has been more of a nuisance than a significant hazard,” answers Guishard. “However, there are other impacts that heavy rainfall can cause, such as increased erosion and resulting damage to infrastructure such as roads.” So far, Hurricane Nicole holds the record for the wettest Bermuda hurricane, dropping 183mm of rainfall during its approach and passage over Bermuda. “Rainfall is also exacerbated by slow-moving storms,” he continues, “and the average forward speed of hurricanes is a subject of active research in academia.”

In his report, Guishard writes: “a more specific examination of hurricane landfalls in the Atlantic basin leads to the conclusion of a 20 percent slow-down of storms near or over coastlines. This means that over time, storm impacts are having a longer duration. The implications are that an estimated annual 10 percent increase in tropical cyclone rain rate per degree C warming would be potentially doubled by a 10 percent slowdown.”

Bermudians have always taken pride in their hurricane preparation and resilience, and other countries often look on in wonder as the clean-up and restoration work begins immediately and at great speed, but would this still be the case if we were hit directly by a slow-moving Category 4 storm and what can we do to prepare for this scenario?

A government spokeswoman confirms that the 2020 Atlantic hurricane season has been a leading part of the Emergency Measures Organisation’s (EMO) regular meetings. She also says that the Disaster Risk Reduction and Mitigation (DRRM) team, whose members are on the EMO, has worked tirelessly “to ensure that Bermuda was well informed and well equipped to weather any adversity.” More specifically, in May, as part of the preparation for the worst-case scenario, representatives from relevant government ministries as well as organisations such as the regiment, police, fire and rescue and BELCO also participated in an international webinar organised by the UK Foreign and Commonwealth Office about hurricane impact in a COVID environment. Areas covered included shelter management, external assistance, communications, health management and resilience, and security and protection.

As a result of this event, and having heard what is happening in other jurisdictions, the DRRM team are now working on amendments to Bermuda’s hurricane preparation and response process, including how to handle such a situation against the backdrop of COVID-19. In addition to domestic support, aviators from the Royal Navy support ship RFA Argus were seen earlier this year doing “reconnaissance sorties” over Bermuda so they could gather “crucial information on landing sites where humanitarian aid could be brought ashore if called for by the island’s governor in a time of need.”

Among the worst pictures published after recent major Atlantic storms were those depicting damage to people’s homes and livelihoods, so if we don’t already, we as individuals must also do everything we can to secure our own property. When asked about this particular issue, John Wight, chairman and CEO of BF&M Limited, says, “With the severity of the impact of hurricanes potentially increasing through climate change, insurers have to be sure they can continue to help customers cover potentially increasing damage claims. We track storms closely, monitor scientific intelligence and adjust our reinsurance programmes to be sure we will be in the position to do so.”

He reminds people that “insurance is critical in protecting what is for many their largest investment—their home or business. It’s when things go terribly wrong that having insurance is so important.” He specifically advises updating inventory records for possessions and contents, and checking you are fully insured for the correct replacement and rebuilding costs so you don’t face challenges in the event of a claim. On a more positive note Wight adds that they are “strong advocates for strong building codes, which in Bermuda are amongst the best in the world.”

There are many initiatives underway to try to combat the causes of climate change but according to NASA Science, “even if we stopped emitting greenhouse gases today, global warming would continue to happen for at least several more decades, if not centuries. That’s because it takes a while for the planet to respond, and because carbon dioxide—the predominant heat-trapping gas—lingers in the atmosphere for hundreds of years.”

While it is therefore vital that we all continue to do our part to help the environment, it also means that the threat of these more powerful, slower-moving and wetter storms is here to stay and we must do everything we can to be fully prepared for them.