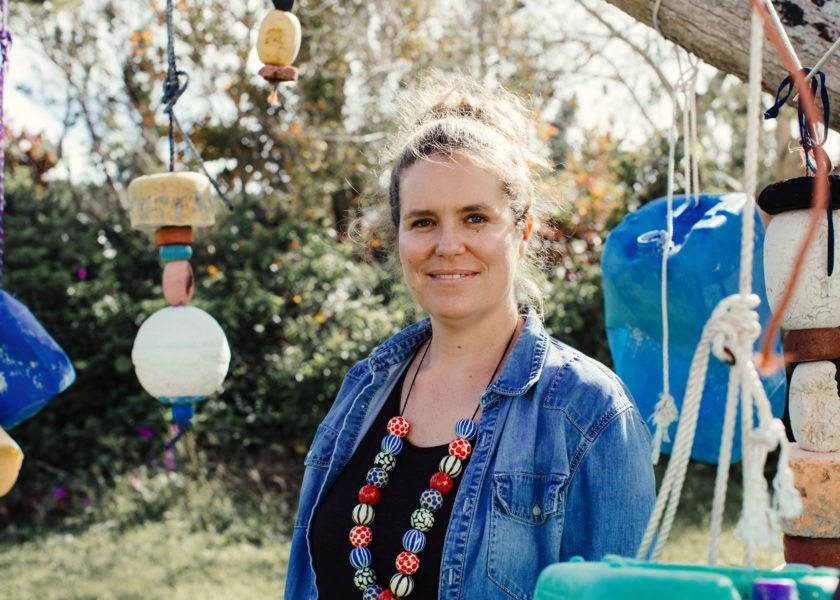 Already a household name in Bermuda as a photographer and artist, Meredith Andrews can now add eco-warrior to that list of accolades. By turning ocean plastic into striking and colourful pieces of art she is highlighting a dark but important message. Her rainbow assortments of recognisable ocean debris such as plastic bottle tops, cigarette lighters, fishing tackle, pens, rope, medicine containers and pieces of general plastic stand out in stark contrast to the magnificent portraits and landscapes on her Instagram page.

Come December, her thousands of followers are treated to an Adventgram. Each day highlights a different ocean plastic issue, inspiring people to clean up the beaches, dispose of their plastic correctly, and avoid single-use plastic wherever possible. “It’s an opportunity for me to tell facts about the scourge of ocean plastic,” she says. “I can explain where these glow sticks are coming from, for example.”

Being Bermudian, Andrews always had an intimate relationship with the environment and this grew while she was at sixth-form college in Wales during the early ’90s. “I went to this college which had a fantastic ethos about thinking globally and acting locally—it was at the time of the rise of the environmental movement,” she explains. It was when she returned to Bermuda in 2014, with her husband and two children, however, that she fully appreciated how bad the situation was becoming. “I started going for daily walks and noticed how much more plastic there was on the beach than previously,” she says. “I’ve always been a collector with my work and one day I was struck by whatever item I found—toy, toothbrush, hairbrush.” Andrews’s message gained traction quickly, spreading throughout the whole island and beyond, even attracting the attention of CNN. Last year she gave the image of one of her rainbow ocean plastic pieces to Axa XL for use on the re-usable shopping bags they sponsored to reduce the number of plastic bags in circulation.

Out of everything she has created, the artwork she is most proud of is the eight-foot by three-foot sculpture of plastics, which was commissioned by the Bermuda Tourism Authority for their new visitor centre on Front Street. “It’s epic compared to anything else I’ve created,” she says. “For individuals to spend a couple of minutes and see all the things we recognise from our everyday life, makes us all culpable. It’s easy to point fingers, but at the same time we have to take personal responsibility.

“Think before you choose that plastic bottle over that glass bottle. Even the smallest actions have a big consequence down the road. We really do have a big problem on our hands.”