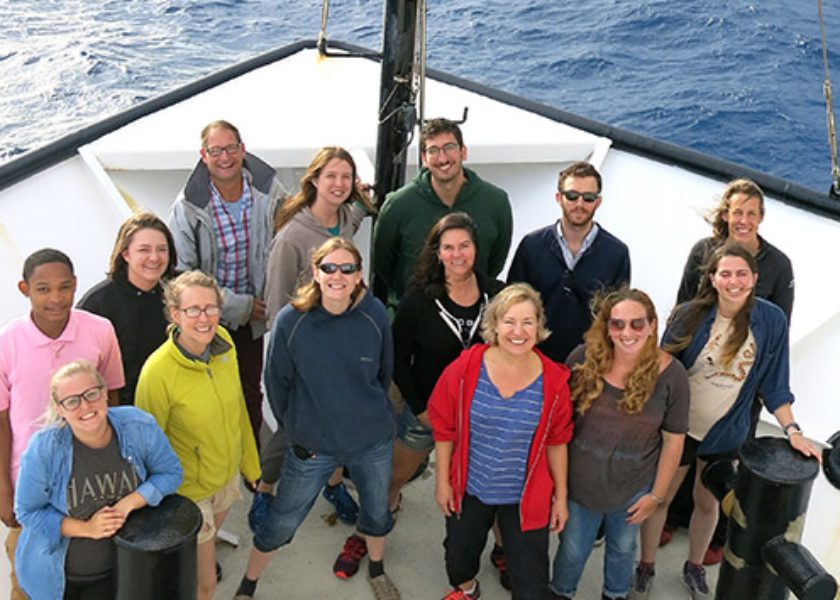 In May 2019, a four-day research cruise set sail from BIOS to investigate the daily migrations of zooplankton in the Sargasso Sea. Unlike many multi-day scientific cruises, this one gave two educators and a senior school student the opportunity to join the team, working alongside scientists in the day-to-day operation of shipboard and laboratory equipment.

A Joint Effort on the High Seas

A research cruise gives educators and a student the unique opportunity to work alongside scientists investigating zooplankton migration.

Late last month, a four-day research cruise on the Sargasso Sea gave two local educators and a senior school student the opportunity to gain unique insight into what it means to live and breathe science aboard a working research vessel. The cruise was part of a project funded by the National Science Foundation (NSF) investigating the daily migrations of a small marine zooplankton called a copepod.

In the open ocean, copepods—along with other microscopic plant and animal plankton—form the base of the marine food web. During the day, copepods live at depths of 1,300 to 1,950 feet (approximately 400 to 600 meters). As the sun sets, these tiny animals participate in the largest daily movement of biomass on the planet, migrating up to 300 to 650 feet (approximately 100 to 200 meters), where they feed near the surface until just before dawn, at which point they begin their migration back down into deeper water. This behavior, called “diel vertical migration,” has the effect of cycling vital nutrients, such as carbon and nitrogen, throughout the water column. This makes them an important part of a critically important pathway known as the biological carbon pump, which transfers carbon dioxide from the atmosphere to the ocean’s interior and back up again.

Principal investigator Amy Maas, a biological oceanographer at BIOS, and co-principal investigators Leocadio Blanco-Bercial (BIOS) and Ann Tarrant (Woods Hole Oceanographic Institution) are interested in how diel vertical migration is influenced by environmental variables (such as light and temperature) and the internal clocks—or circadian rhythms—and metabolisms of the copepods themselves. By gaining insight into the daily cycles of zooplankton physiology, scientists can better predict the contributions of zooplankton to the ocean’s biological pump.

While writing the grant proposal, Maas and her collaborators proposed this hands-on partnership as a way to more broadly disseminate their research findings to educators in Bermuda and around the world.

“Working with educators allows me to more effectively share the love I have of the ocean with students in a way that actually helps them build the skills necessary to do ocean science research themselves,” Maas said. “My goal for this project was to provide educators with real oceanographic experiences and datasets that relate to some very cool critters and interesting biological questions that they can then use to build course content in science and math.”

Kaitlin Noyes, the director of Ocean Academy at BIOS, was asked to join the team as a co-principal investigator and use her education background to develop a learning module, aimed at senior school students, focusing on the biological pump and the process of diel vertical migration. The module will be developed on the Data Nuggets platform, which will allow students to manipulate real-life data and interpret quantitative information. Noyes plans to pilot the educational module with BIOS summer camp students and make it available through the BIOS website, teaching training programs on island, and through a peer-reviewed educational journal. Blanco Bercial then plans to translate the module into Spanish, his native language, to expand the reach of the team’s work.

Noyes reached out to Paul Wright, a physics and general science teacher at Saltus Grammar School in Bermuda and long-time mentor in the BIOS Mid-Atlantic Robotics IN Education (MARINE) program. Beginning in the fall of 2019, Wright will be teaching the senior year oceanography course at Saltus, and both he and Noyes felt this was an invaluable opportunity to learn, outside of a textbook, about the work that scientists do at sea to understand the chemical and biological aspects of the ocean.

The final member of the team was Marcus Rewan, 17, an S4 student at Cedarbridge Academy in Bermuda and a graduate of BIOS Ocean Academy programming. Rewan began participating in BIOS education programs at the age of 11 and completed the Marine Science Internship program in 2017. This summer, he has been selected as a Bermuda Program intern and will be working with microbiologist Rachel Parsons in the Microbial Ecology Laboratory at BIOS.

“Given his keen interest in pursuing a career in oceanography, we wanted to use this opportunity to give him a glimpse of what oceanographers do while at sea,” Noyes said. As part of his Bermuda Program internship, Rewan will be analyzing samples from the cruise, allowing him to continue working with data he had a hand in collecting at sea.

Over the course of the three days at sea, Noyes, Wright, and Rewan assumed a variety of responsibilities aboard the research vessel, including filtering water for respiration experiments, assisting with the deployment of collection nets, and identifying copepods in samples. Noyes also produced social media material for the National Marine Educators Association to give followers a sense of what it’s like to work as an ocean scientist. Wright, meanwhile, spent a fair amount of time “trying to ask questions and find out what the scientists were up to without getting in the way.”

“While I’ve spent time on research ships in my career as an oceanographer, I’ve never been on a ship studying either biology or chemistry,” Wright said. “This was both useful and fascinating to see the other aspects of marine science being brought out of a textbook and into reality.”

Rewan went into the cruise with the goal of learning more about what day-to-day life is like for scientists aboard working research vessels. He walked away with this and much more. “I learned that being a scientist at sea is very demanding,” Rewan said. “But I also gained experience working with shipboard and laboratory instruments and I have a new appreciation for the different species of zooplankton that live in the ocean.”

Although their inclusion on the cruise was mostly an “educational bonus,” Maas and her colleagues were incredibly grateful for their participation. “This was an intense project with 24 hour work and they all jumped into it with patience and positivity. I am not certain how the work would all have gotten done without their help.”