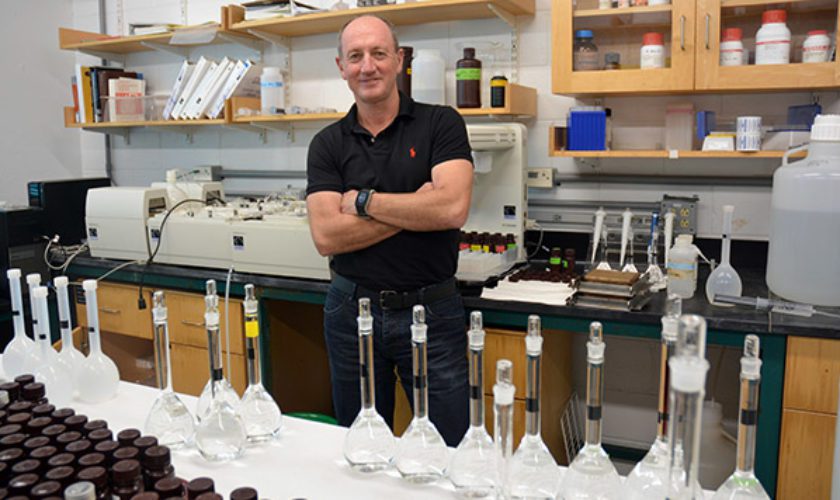 A New Vehicle Tests Bermuda’s Waters: Clio, an autonomous robot, is designed for speed and efficiency when sampling far below the ocean surface

BIOS oceanographer Rod Johnson is the chief scientist on board a cruise this month offshore Bermuda using a new underwater vehicle designed to reduce costs and improve science efficiency at sea, while gathering samples for biological and chemical analyses from the ocean water column.

On April 6, Clio arrived at BIOS via a container ship from its home at Woods Hole Oceanographic Institution (WHOI) in Massachusetts. Johnson, and the engineers who designed and service the vehicle, spent several days readying the vehicle at BIOS before heading 45 miles (75 kilometers) offshore Bermuda on board the research vessel Atlantic Explorer to the Bermuda Atlantic Time-series (BATS) site.

The BATS program, initiated in 1988, undertakes monthly research cruises to improve understanding of the time-varying components of the ocean carbon cycle and related elements in the surface ocean. Johnson and Nicholas Bates, a chemical oceanographer, co-manage the BATS program at BIOS.

Clio, about the size of a large refrigerator and named for a muse from Greek mythology, is intended to be a sampling platform that can be used simultaneously with, or independently of, traditional wire-based sampling systems on research vessels. The goal of Clio is to improve sampling efficiency and also reduce the time and cost of broad biogeochemical surveys, which are necessary to understand patterns and cycles of nutrient cycling and marine food web dynamics, and the role that the ocean plays in shaping Earth’s climate, Johnson said. 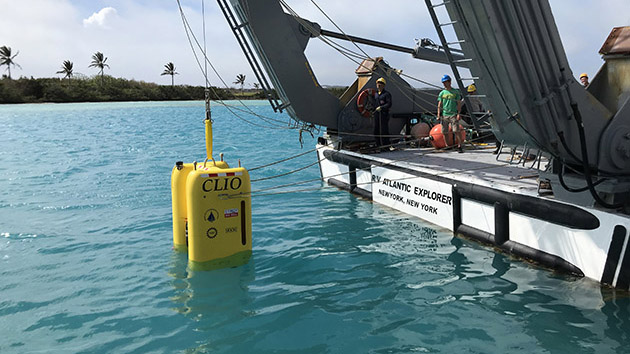 Once lowered from the Atlantic Explorer, the vertical-diving Clio (pictured here during a dock test) propels itself to the bottom of the seafloor using a pair of thrusters. As it ascends, it stops at a series of pre-programmed depths to filter water and collect samples. In case of a problem, Clio will float to the surface, but otherwise the thrusters help it move through the water column and hold depth while sampling. Photo by Paul Lethaby.

Learning about the Microbiome
By analyzing the biomass Clio collects, scientists can identify what’s living in the water and which nutrients they are using to perform biological functions, while also learning more about the ocean’s microbiome—the microbial system that helps drive life processes and elemental cycling on Earth.

For the past three years, Johnson has been in collaboration with Mak Saito, a WHOI biogeochemist and a lead principal investigator on the development of Clio, to collect samples at BATS using more traditional methods. During this period, Saito and several co-investigators have been developing Clio and testing it offshore New England. The vehicle will spend a year at BIOS for use on four oceanographic cruises to the BATS station.

“The idea is to use it to gather samples in different seasons,” Johnson said. In 12 months, it will head back to WHOI, taking samples along the way.
Currently, physical oceanographers like Johnson gather the samples they need from BATS and other locations by using battery-operated pumps that are lowered down to various ocean depths on a wire. The pumps suck seawater through a filter that captures particles. When the pumps are back on deck, the filter heads are removed and brought to a cooled lab for analysis.

“The current sampling system works quite well,” Saito said. “But in large survey programs where we are intensively sampling at many unique locations across major ocean basins, it will greatly improve efficiency to be able to move one operation off the ship’s wire and onto the vehicle.”

“The long-term goal of Clio is to lower the barriers to completing a global survey of marine microbiology and biochemistry,” said John “Chip” Breier, chief scientist of the sea trials and a lead principal investigator of the project from University of Texas Rio Grande Valley. “Ultimately, the vehicle’s capabilities will greatly expand the observational capacity of our oceanographic research fleet.” 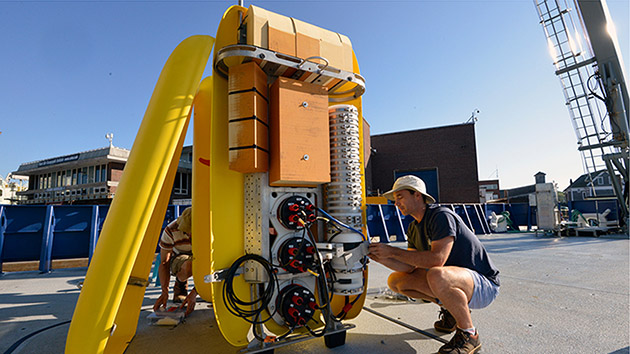 Mike Jakuba (in striped shirt), a lead engineer at WHOI and a principal investigator on the Clio project, readies the vehicle for its first research cruise aboard the vessel Atlantic Explorer. He arrived at BIOS in April with Daniel Gomez-Ibanez (in blue shirt), a fellow WHOI engineer. They are often asked about the vehicle’s name; it was inspired by a muse from Greek mythology. Photo courtesy of WHOI.

How Clio Works
Once lowered off a ship, the vertical-diving Clio propels itself to the bottom of the seafloor using a pair of thrusters. As it ascends, it stops at a series of pre-programmed depths to filter water and collect samples. In case of a problem, Clio will float to the surface, but otherwise the thrusters help it move through the water column and hold depth while sampling.

The autonomous underwater vehicle, or AUV, is operated by scientists from the ship and can dive to a maximum depth of 3.7 miles (6 kilometers), working underwater for 12 to 14 hours at a time. After each deployment, Clio returns to the surface with stacks of filters representing hundreds of liters of seawater that oceanographers can use to investigate the genetic and functional diversity of marine microorganisms, as well as nutrients that control their diversity.

“As an AUV, Clio occupies a unique design space,” says Mike Jakuba, a lead engineer at WHOI and a principal investigator on the project.  “AUVs are typically designed to travel horizontally along the seafloor and to survey at a relatively constant depth. By contrast, Clio must travel vertically in the water and sample for long periods of time at many depths separated by hundreds to thousands of meters.”

Jakuba designed Clio to be compressible so that as the water density around it increases with depth, without greatly impacting buoyancy. This saves battery energy that would otherwise be expended fighting buoyancy and avoids the need for complex ballast systems.

On major expeditions that survey entire ocean basins, Clio can be in the water performing a survey while other researchers concurrently take separate sets of samples using the wire system.

Johnson said the current wire-based method for sampling on BATS cruises takes five hours of ship time and accesses only four depths, during which time most other science operations cannot take place.

“With Clio, which has multiple filter cartridges, we can complete the deployment and recovery in 30 minutes and have other types of science going on at the same time, plus we can retrieve samples from 24 different depths,” he said. “It’s exciting because we can get extremely high resolution from some complex water layers.”