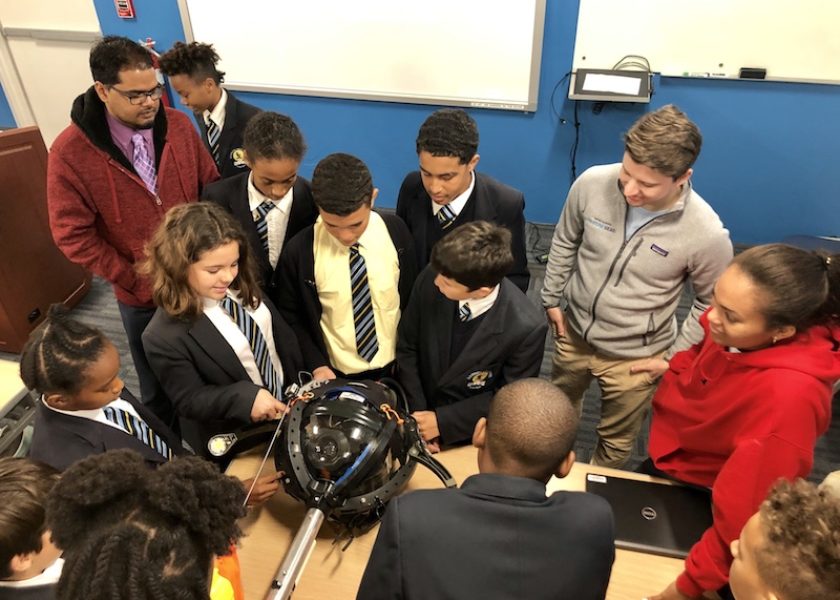 Product development manager Alan Turchik (in grey, at right) and project partner Laura-Ashley Henderson (in red) of the University of the West Indies explained the Deep Ocean Dropcam system to visiting students from Clearwater Middle School. They were members of the school’s robotics team.

A Unique Look at the Seafloor Near Bermuda: Bermudian Students Explore with Deep Camera System

The sixgill shark approached the camera deployed from a boat floating five miles offshore Cooper’s Island in Bermuda, then did what sharks often do: tried to eat it.

Video footage, viewed by nearly two-dozen enthralled local students and their teachers while visiting BIOS on March 14, showed the shark at 2,700 feet (937 meters) deep chewing on the camera system, its teeth raking the sides of the glass pressure housing. The shark’s trademark six gills came into view as the camera system disappeared into its mouth for a few seconds—eliciting appreciative remarks from the students—before the shark stopped gnawing and slowly swam away.

“We designed this camera because someone came to us and said ‘we want to know more about what sharks do in their free time,’” said product development manager Alan Turchik, who helped develop the Deep Ocean Dropcam system with the National Geographic Society’s Exploration Technology Lab.

These are the types of engineering projects that BIOS educator and Ocean Academy director Kaitlin Noyes hopes will inspire local students involved with their own undersea robotics project. For the past five years, BIOS has hosted teams of local public and private school students participating in Mid-Atlantic Robotics IN Education (MARINE), a program that develops and deepens students’ science, technology, engineering, and math (STEM) skills through the design and construction of their own remotely operated vehicles (ROVs).

Drop cameras are computer-based devices deployed thousands of feet down into the deep ocean, up to a depth of 20,000 feet (6,000 meters), with the intent of capturing images of sharks and other marine life, as well as seafloor events, such as volcanic activity. The cameras have captured hundreds of hours of footage, frequently in places that haven’t before been recorded. In Bermuda, species spotted using the camera included the great lantern shark, cusk eels, and the gummy shark, or smooth dogfish.

“We take the camera, push it over the side of the boat, let it sink to the bottom, and hope there’s something interesting down there to film,” Turchik said. At a pre-programmed time the camera system resurfaces and sends a signal via satellite for recovery on the sea surface.

Last fall, after meeting Turchik at the National Ocean Exploration forum at the Massachusetts Institute of Technology, Kaitlin Noyes was able to link the team with BIOS researcher Tim Noyes. When the team confirmed their visit to Bermuda for camera deployments, they knew that students needed exposure to this work.

Twenty-two students from Clearwater Middle School, all members of the school’s robotics team, attended the March seminar. In the days prior to their visit, Turchik and other collaborating scientists, including Tim Noyes, Brennan Phillips of the University of Rhode island, and Laura-Ashley Henderson of the University of the West Indies, deployed the camera system seven times offshore Bermuda, then analyzed the subsequent video footage before showing highlights to the visiting students.

The students, ranging in age from 12 to 14 years, are part of three teams that have spent months designing, building, and testing their own ROVs during after-school programs with their teachers, parents, and other adult mentors. In April they will gather at the annual robotics competition held at the National Sports Centre pool to compete with their robots against 34 other Bermudian school teams in a series of maneuverability challenges. They will also be interviewed on their ROV design.

The March presentation at BIOS was an excellent opportunity for students to become “enthused and excited before the competition,” said the school’s design and technology teacher McLaren Lowe. “They are going to spend the weeks ahead taking all the theory they have learned, all of the information they have absorbed about form and function and design, and really dig into the building phase of the project. Being here today was an inspiration.”