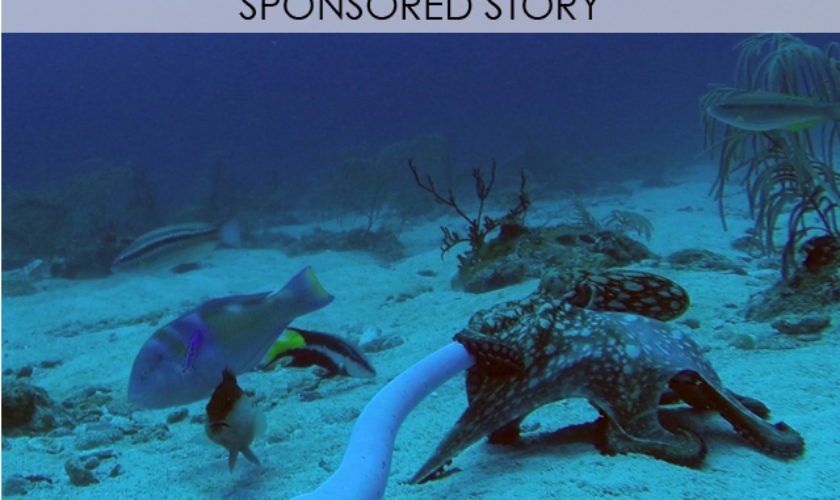 Tim Noyes, a coral reef research specialist at the Bermuda Institute of Ocean Sciences, knew he wanted to take action fighting the scourge of lionfish invading Bermuda’s coral reefs.  He was helping out with a short documentary to raise awareness about these voracious predators when he came up against a vital question that captured his interest as a scientist: what, exactly, were the lionfish eating in Bermuda?

While the invasive lionfish that have proliferated on shallow reefs in the Western Atlantic and Caribbean are known to consume over fifty species of economically and ecologically important fish, Bermuda’s lionfish problem goes deeper: an elite group of technical divers found lionfish carpeting reefs two hundred feet below the surface.  These troubling observations led to fears that lionfish were gorging themselves on “everything” living on Bermuda’s deep reefs.  But nobody knew exactly what that “everything” was – what species lived there, and were all of them being eaten? Did juvenile fish get disproportionately devoured? And perhaps most importantly, what might this mean for coral reef health and fishing in Bermuda?

To gather basic information about the communities of fish forced to share their habitat with lionfish, Noyes borrowed a method that is commonly used in Australian coral reef surveys and modified it for the deeper waters of Bermuda.  By mounting a GoPro camera in tubular steel housing and positioning the lens so it faces a bait bag stuffed with pilchards, Noyes candidly captures the deep reef community as they aggregate around the bait.

So far, the footage has been peppered with surprises: a pufferfish never before documented in Bermuda, and several species of fish (including Puddingwife, Coney and French Grunt) found far deeper than their published depth range.

Because deep “mesophotic” reefs (named for their “middle light” conditions) exist beyond the 130-foot depth limitations of conventional SCUBA divers, they have not been well studied by scientists.  At these depths the corals and their symbiotic algae eke out a living from the meager light that filters down from the surface, and the dimness reduces the vibrant colors of reef fish to shades of blue. Mesophotic reefs encircle Bermuda’s reef platform and also cover the flat plateaus of the Argus and Challenger Banks, which are some of Bermuda’s most productive waters and popular deep-sea fishing sites.

Working for the past two summers with teams of interns, Noyes has conducted nearly a hundred camera “drops” at an array of sites and a systematic range of depths along Bermuda’s south shore. For every hour of video footage, two to three hours are spent identifying the species and life stage of each fish caught on camera.

Unique fish communities are beginning to emerge from the data generated by videos taken at different depths along the reef platform.  Different species of wrasses, for example, inhabit distinct zones with the Spanish Hogfish abundant down to around 115 feet, and the Spotfin Hogfish dominating below that.

The lionfish? They’ve shown up at many of the sites, with no trends to date, identified in their location. When lionfish are present the native fish show no signs of predator avoidance, indicating they don’t recognize the lionfish as the efficient predator that it is.  In contrast, when a shark cruises past the camera all the native fish dart down to seafloor in an attempt to escape notice.

The videos provide insight into other fascinating fish behavior, such as communal hunting strategies between goatfish that rustle up prey from the seafloor, and jacks that zip in for the kill.  Noyes believes that as the archived video grows bigger each summer, the pool of data will also become a rich resource for analyzing fish behavior.

This summer, Noyes is branching out to survey more sites around Bermuda, and will expand sampling out onto the Challenger Bank where preliminary baited camera drops filmed reef sharks, and fewer lionfish.  As the dataset expands, Noyes hopes it can help government officials broadly compare the fish communities at different sites as they assess human impacts on coral reefs.

The data may also get to the root of where and how lionfish are impacting Bermuda’s reef communities.  This basic information will inform proactive management strategies for the lionfish problem – such as targeted culling – and help Noyes achieve his original goal of taking action, rather than just waiting to see what happens on Bermuda’s reefs.