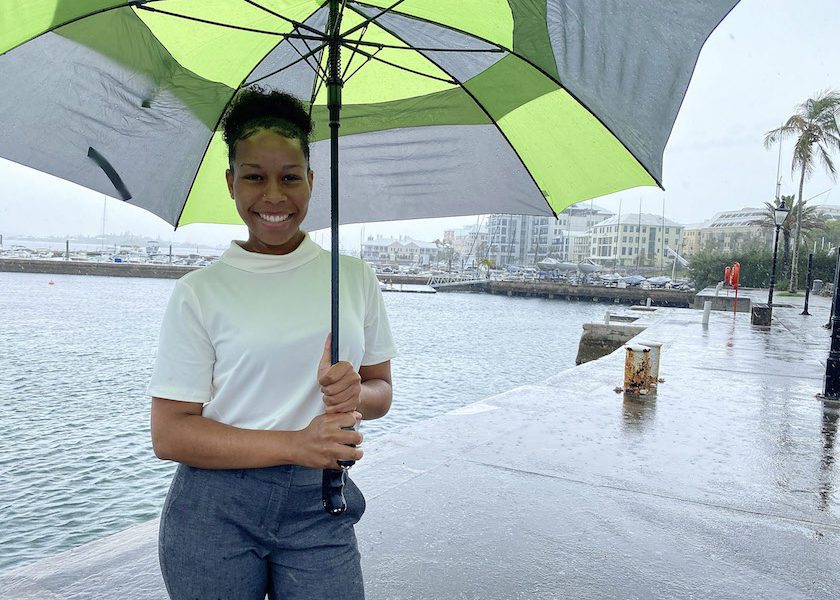 Amber Wolffe, an undergraduate student at Metropolitan State University in Denver worked remotely this summer on an 8-week BIOS Bermuda Program internship with the Bermuda Weather Service. Her research focused on understanding the conditions that lead to low-level wind shear, a potentially dangerous condition for airplanes as they make their final approaches to airports.

While the COVID-19 pandemic disrupted summer internship plans for many university students, Amber Wolffe, an undergraduate student in meteorology and mathematics at Metropolitan State University in Denver (Colorado, USA), overcame these challenges to complete an eight-week Bermuda Program internship with the Bermuda Weather Service (BWS, a section of the Bermuda Airport Authority). Since 1976, the BIOS Bermuda Program has selected a handful of budding scientists each year to receive paid fellowships that allow them to work on specific projects of interest alongside BIOS scientists in both field and laboratory settings.

Wolffe first participated in the Bermuda Program in 2015 when she was a rising second-year meteorology student at Otero Junior College in La Junta, Colorado. Working alongside Mark Guishard, then-program manager of the BIOS Risk Prediction Initiative, Wolffe learned how meteorology and data analysis models are used by the insurance and re-insurance industries.

“After completing my meteorology requirements at Otero, I decided to return to BIOS for another internship because I wanted to improve my research skills,” Wolffe said. “I wanted to use what I had learned and enhanced that knowledge through hands-on research experience, while also gaining confidence and professional development.”

Wolffe reached out to Guishard, now the director of the BWS and adjunct faculty at BIOS, and together they discussed her interests and career plans after graduating. Having been born in Bermuda and after living in Colorado for six years, Wolffe became fascinated with mountain weather; specifically, how weather systems are affected by the terrain. She and Guishard decided to focus this Bermuda Program internship on the topic of wind shear—changes in wind speed or direction over short distances—and how it impacts aircraft approach at the L.F. Wade International Airport in Bermuda. This is of particular interest to the aviation industry because low-level wind shear generated by the landscape’s topography, and often by thunderstorm clouds, can cause changes in the headwind for aircraft taking off and landing, resulting in a bumpy ride for passengers.

“One of the main reasons for meteorological services at airports is to warn against conditions, such as low-level wind shear, that could be hazardous to aircraft,” Guishard said. “The conditions for wind shear to occur locally are known, but not very well documented scientifically, and this was the focus of Amber’s project.”

During a period of eight weeks over June and July, Wolffe—with guidance from Guishard—compiled wind shear reports and investigated the underlying weather precursors to wind shear. She hopes her research will result in a better understanding of wind shear and assist in providing more advanced forecasts for approaching aircraft. Before returning to university in early July, Wolffe reflected on the challenges posed by a remote internship, but noted the experience taught her how to prioritize “what will yield a better research outcome and what will essentially set me back.”

Guishard, who has mentored multiple meteorology students over the years, was keen to support another Bermudian meteorologist. “Not only did this internship enhance her research skills, but it also added resumé-building work experience and exposure to operational forecasting,” he said. “Of course, there are great benefits to the Bermuda Airport Authority as well. This collaboration with BIOS builds the pipeline for engaging Bermudian candidates for future positions at BWS, as well as providing a relevant short study on aviation meteorological phenomena.”