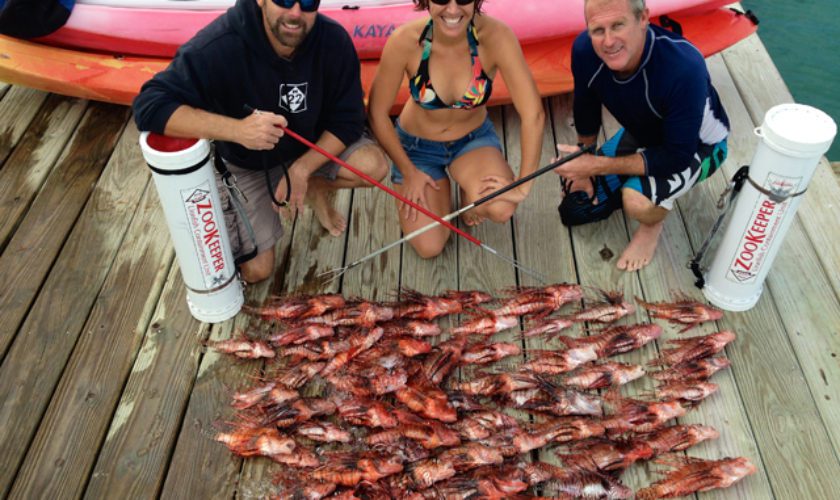 Dr. Gretchen Goodbody-Gringley has been studying the legendary corals around Bermuda for more than a decade. As she dove to collect small coral samples for genetics studies during her doctoral research, she saw not only the island’s underwater beauty, but also the explosive growth of a foreign invader on the reefs — the lionfish.

Now, Goodbody-Gringley is an Assistant Scientist at the Bermuda Institute of Ocean Sciences (BIOS), and also part of the Bermuda Lionfish Taskforce, a collaborative organization seeking strategies to manage lionfish populations. She often trades her pipette for a three-pronged spear, and her lab coat for four tanks of mixed gas that help her to descend to reefs 200 feet below the surface in search of lionfish.

With the size and distribution of the lionfish population in Bermuda still unknown, Goodbody-Gringley is leading scientific surveys that include both shallow and deep reefs at many sites around the island.

Already the surveys have revealed lionfish “hotspots” that are a serious threat to some of Bermuda’s most striking and productive reefs.   “When we consider the population of Bermuda” she said, “the density of lionfish at these hotspots equates to about 240 lionfish per individual in Bermuda.”

Understanding the extent of Bermuda’s lionfish invasion, and discovering their favored habitats will allow the Lionfish Taskforce to identify strategies for their removal.

With elongated, venomous fin spines radiating down their back and fanning out on each side of their striped bodies, lionfish look deceptively ornamental.  They aren’t streamlined powerhouses like the sharks that cruise coral reefs, they lack the cavernous mouths of groupers, and they are missing the lunging abilities of barracudas. However, the combination of their voracious appetites and skyrocketing populations have allowed invasive lionfish to become the most prolific predators on western Atlantic and Caribbean reefs.

Lionfish are native to the Indo-Pacific, but in the mid 1980s people released a few individuals into Florida’s coastal waters. Since then their descendants have invaded the Gulf of Mexico, the Caribbean, and the shores of the mid-Atlantic region of the United States. The first lionfish documented in Bermuda was a juvenile collected in a tide pool on the southern shore in 2000.  Within four years, lionfish were ubiquitous in Bermuda.

The greatest density of lionfish previously recorded on shallow reefs has been found in the Bahamas, where some sites have 390 lionfish per hectare. Their impact at these densities has been devastating. Divers in the Bahamas recorded a single lionfish devouring 20 reef fish in a half hour. One study conducted over two months documented lionfish reducing the number of small and juvenile reef fish by 90 percent.

In the Atlantic, scientists believe that fish and crustaceans simply don’t recognize the lionfish as a predator. Taking advantage of their prey’s naiveté, lionfish gorge themselves; dissections of lionfish from the western Atlantic have even found obesity-related liver disease.

A new set of skills, and no room for mistakes

“When we started this, I was not a technical diver,” said Goodbody-Gringley, who has been diving since age 16. At the beginning of the study, she was a DiveMaster with more than 500 dives logged, and she planned to survey sites within the 130 foot limit of her conventional SCUBA certification.  However, when her two technical-diving colleagues returned from initial deep dives with wild reports of lionfish carpeting the reef, she changed her mind.

“I decided I really needed to see this for myself,” she said.

First, she was certified in advanced use of Nitrox, a gas with a greater percentage of oxygen that enabled her to spend more time working at the 100ft sites.  Then, she practiced decompression procedures in courses done at 150 feet, carrying several tanks of mixed of gases and switching strategically to pure oxygen during her final ascent.  This process relieves the blood of nitrogen taken on at depth and prevents decompression sickness. Finally, she was trained to use trimix, which incorporates helium into the breathing gas, allowing her to descend beyond 200 feet.

Encumbered with two tanks on her back and a tank under each arm, Goodbody-Gringley admits that there is a learning curve working underwater with so much gear.  This kind of diving requires physical stamina and on-the-spot decision making, as even minor accidents related to equipment failure or clouded judgment can be fatal when humans venture so far down.

“Every time I go out I have butterflies in my stomach as I’m standing on the back of the boat,” said Goodbody-Gringley.

Add a spear, venomous fish, and the need to collect rigorous scientific observations, and the complex choreography required for this type of underwater work is elevated to an art.

Now, as a certified Advanced Nitrox, Trimix and Decompression Procedures Diver, Dr. Goodbody-Gringley is among an elite group of individuals qualified to conduct research using SCUBA at these depths, and one of only two women worldwide known to use this technology to study reefs.

Dr. Gretchen Goodbody-Gringley uses a Diver Propulsion Vehicle (DPV). It allows the researchers to cover a larger surface area of reef when hunting lionfish, and particularly useful when encountering strong currents at depth.

Searching for answers to safeguard reefs

“There are simply not enough divers to make a significant dent in the population by culling alone,” Goodbody-Gringley said. They have no natural predators in the Atlantic, and their reproductive rates are staggering; scientists have found that in North Carolina and the Bahamas, a single female lionfish produces over two million eggs per year.

Dr. Goodbody-Gringley’s collaborators from the Bermuda Department of Environmental Protection are currently working to design a lionfish-specific trap that could be deployed in deeper waters. There is also talk of teaching people how to hunt for lionfish and safely remove venomous spines, a plan that may lower populations on shallow reefs while providing fresh food for people.

Goodbody-Gringley will be sequencing the DNA of lionfish from the surveys to determine whether “hotspot” populations are isolated or interbreeding, which will help inform the culling and trapping programs.  She also plans to continue to characterize the “hotspot” environments physically and chemically to better understand what conditions constitute favorable habitats for lionfish in Bermuda.

Gretchen Goodbody-Gringley’s lionfish research is supported by funds from the UK’s Darwin Plus Award, in collaboration with the Ocean Support Foundation, the Bermuda Zoological Society and the Bermuda Department of Environmental Protection.