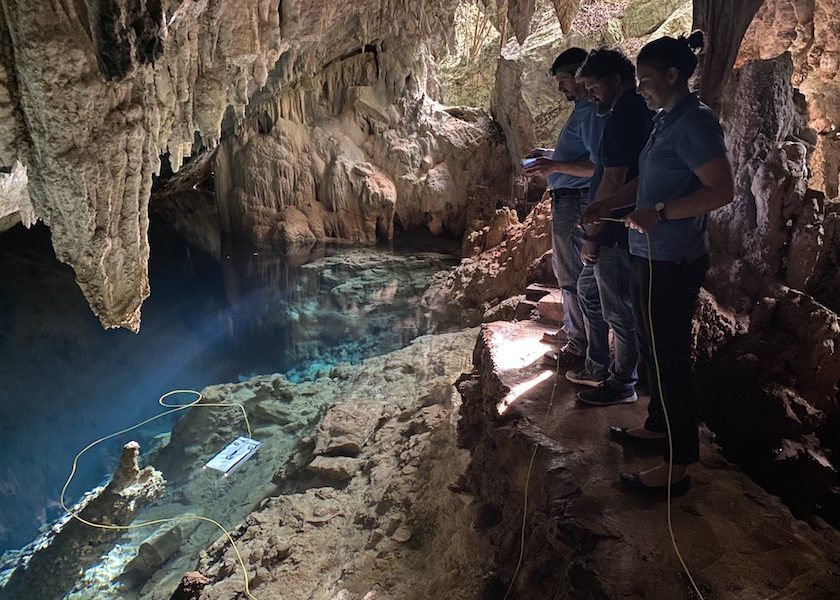 As Blanco-Bercial (holding controller) waits for government permits to expand his research, he has taken the ROV once on a short test run at a cave in the Walsingham Nature Reserve, where it performed well in the high-saline environment. He was accompanied by Noyes (holding tether) and Thaler.

The rare and ancient microorganisms that live in Bermuda’s submerged caves intrigue BIOS marine ecologist Leocadio Blanco-Bercial, but venturing into these dark, remote spaces to document and retrieve samples is often logistically difficult, not to mention dangerous. When a colleague mentioned a grant for a portable underwater robot that Blanco-Bercial could instead steer into narrow crevices and twisting tunnels to gather microbe samples and take photos, he set to work on an application.

Bermuda is home to a network of more than 200 limestone caves connected to the sea through underwater passageways. Studies in the 1980s showed 23 native cave-dwelling copepod species native to Bermuda, as well as several unique only to the island, also known as endemic species. Some of the organisms are believed to have lived in the island’s cave for millions of years. But little research, outside of Blanco-Bercial’s initial sampling while accompanied by a certified cave diver in 2016, has occurred beyond that. Once a government permit is in place allowing him access to deeper and more remote cave systems, Blanco-Bercial hopes to expand his research in the caves to learn more about the copepods’ natural environment.

Copepods, some of the most populous organisms on Earth, are a critical base in the marine food web. How are these organisms related genetically to local populations, and to those worldwide? In addition to the biological research conducted by scientists like Blanco-Bercial, conservation research in the caves is also a clear and compelling use for a small ROV like Trident, as caves face threats from development, sewage, and historical use as illegal dumping areas.

The ROV is robust enough to carry lights and a high-definition camera for still and video shots that will allow for a better understanding the cave environment. A single person can carry Trident, which is small enough fit in a backpack and has been launched from kayaks for ocean research. The compact size and maneuverability allows researchers to sample with little disturbance in the caves, which are protected and endangered ecosystems in Bermuda.

The ROV will also be available for use with other programs and projects at BIOS, including the Institute’s local education programs. BIOS director of Education and Community Engagement Kaitlin Noyes has challenged three high school juniors enrolled in Bermuda’s Saltus Grammar School oceanography class to assist Blanco-Bercial in brainstorming the design for an attachable plankton sample collection mechanism (a small net with a pump). The goal is to sample plankton living above the caves’ floors and also within their cracks and ridges.

Accessing the entrances to the saltwater cave systems scattered across Bermuda is challenging. “Only a few are large enough to allow divers to enter, and, even when accessible, divers risk damaging the fragile environment,” Blanco-Bercialsaid.

As he waits for permits to expand his research, Blanco-Bercial, accompanied by Noyes, has taken the ROV for a test run at a cave in the Walsingham Nature Reserve, where it performed well in the high-saline environment. He’s glad that the risks of cave work will now be minimized, for himself and his team. “I’m a scientist,” he said. “And also a cautious father of two.”