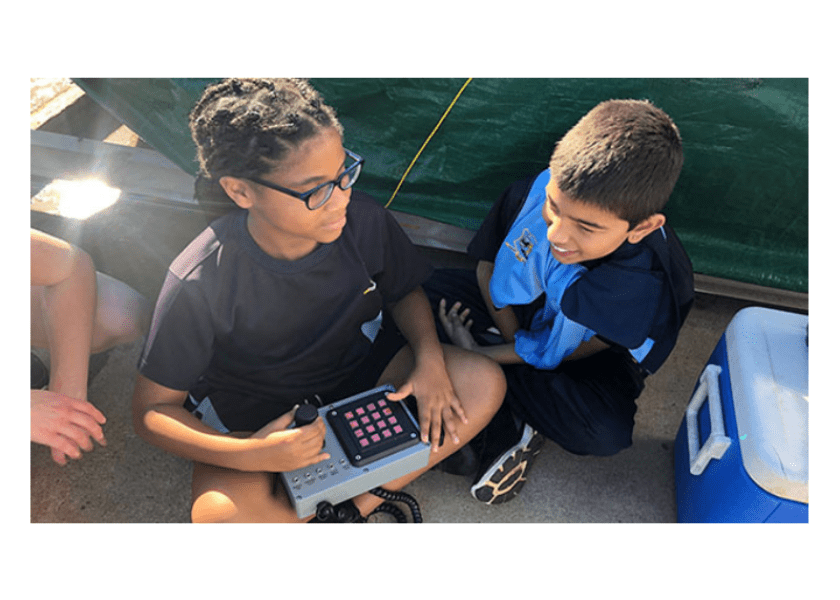 A novel partnership between BIOS’s Ocean Academy and the University of Delaware (UDel) this winter gave dozens of local teachers and students the opportunity to learn about marine robotics and how they are used to explore the oceans.

Oceanographer Art Trembanis, an associate professor at the UDel College of Earth, Ocean, and the Environment (COEOE), brought 17 undergraduate students—a mix of marine science, environmental science, and geology majors—and one teaching assistant to BIOS for three weeks in January as part of the college’s intersession (or mid-year) study abroad program.

During the course, students learned about oceanography and the geology of Bermuda, and their research included a number of laboratory investigations and field trips that allowed them to explore some of the island’s unique features.  Trembanis, who was also at BIOS to conduct research with reef ecologist Gretchen Goodbody-Gringley, brought several vehicles for ocean exploration, including an automated underwater vehicle (or AUV) and a remotely operated vehicle (or ROV), to give his students a practical introduction to equipment used by researchers in the field.

He took the learning one step further through a partnership with Kaitlin Noyes, director of BIOS’s Ocean Academy. Noyes had approached Trembanis with the idea of holding an ocean technology-themed workshop for students around the island as part of the BIOS Mid-Atlantic Robotics in Education (MARINE) program.

“She mentioned that a lot of school groups participate in the island’s annual ROV challenge,” Trembanis said. “At first I thought we might visit a school or two, but then it clicked: there’s nothing like the challenge of having to present something to make sure you’re learning it, and this would be a great experience for my students.”  Noyes reached out to the teachers and ROV clubs around the island who either have participated in MARINE events in the past, or who have expressed interest in competing in this year’s ROV Challenge. On January 17, 89 students and 16 teachers came to BIOS for a full-day workshop. The students, who ranged in age from 9 to 17, represented nine schools: Impact Academy, Clearwater Middle School, Dellwood Middle School, Berkeley Institute, Paget Primary, Somerset Primary, Bermuda High School, Saltus, and Warwick Academy.  Noyes, BIOS educator Kyla Smith, Trembanis, and his students had visiting teachers and students rotate through seven interactive stations around the BIOS campus: building and racing solar-powered boats; an introduction to AUVs with the UDel AUV “DORA” as a model; using a side-scan sonar off the dock to locate objects underwater; learning about ROV design and operating an open-source consumer ROV off the BIOS dock; an introduction to basic coding using programmable circuit boards; learning how researchers use drones to collect scientific data; and a prop demonstration for this year’s MARINE ROV Challenge with a question and answer session for beginner teams.

Clearwater Middle School science teacher Devin Persaud was keen to bring his students to the workshop to give them hands-on experience with ROVs. “Having students attend the workshop let them put the theory they’ve been learning in the classroom into practice,” Persaud said.   He also noted the workshop helped students understand more about the programming aspects of their ROVs. Persaud will coach the school’s Beginner ROV teams at the MATE/MARINE ROV Challenge in April, and said that he hopes “the hands on experience gathered from the workshop will translate into success when the teams meet at the competition.”  For some of the younger students, the workshop was a fun opportunity to explore things outside the traditional classroom curriculum. Eva Trott, a P6 student at Paget Primary, was particularly interested in learning how to write computer code to make a light blink on the programmable circuit board.    And how did the workshop turn out as a teaching and learning opportunity for Trembanis’ students?

“They were pretty anxious about the experience,” he said. “The morning of the workshop I was sending group text messages saying ‘you’ve got this’ and ‘brace yourself.’ But I knew once they presented to the first group, they’d be fine.”  Collin Megee, a junior in geology and earth science at UDel, was one of four students assigned to the station where students learned about alternative energy and built their own solar-powered boats. Despite not knowing much about the inner workings of solar panels prior to the workshop, Megee and his team members pooled their knowledge. “It was nice to help educate kids and get them excited, as well as learn some new things myself,” he said. “I have to give the students credit,” he added, “they were much more engaged than I thought they’d be.”

Nicole Steplewski, a junior in environmental science, worked with two other students to lead the session on coding and circuit boards, including how these relate to the design, control, and operation of AUVs and ROVs. “Although I had no idea what an Arduino [circuit board] was prior to this event, I was eager for the challenge and excited to learn something new,” she said. “I now feel comfortable instructing a beginner course and even during the workshop I was learning new things about circuits that some of the students taught me. I’m actually debating buying my own starter kit.”  “The collaboration demonstrated the power of BIOS’s education programs in facilitating connections between international universities and local students,” Noyes said. “Thanks to the team from the University of Delaware, we were able to expose Ocean Academy students to new career possibilities, while also having the opportunity to provide a hands-on experience at BIOS.”