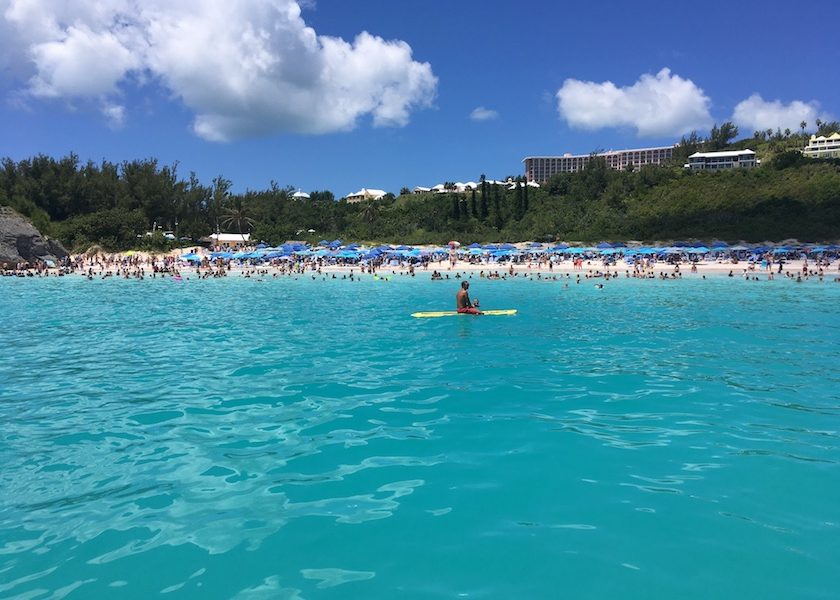 New research is shedding light on the impact of oxybenzone, a chemical filter found in many sunscreens, on Bermuda’s coral reefs. With funding from the Bermuda Government Department of Nature and Environmental Resources and NASA, a team of researchers at BIOS, led by senior scientist and coral reef ecologist Eric Hochberg, conducted a study to characterize the presence of oxybenzone, or benzophenone-3, in Bermuda’s nearshore waters, as well as the impacts to coral from long-term, low-dose exposure to the chemical.

The impetus behind the investigation was research published in 2015 by a team of international scientists stating that oxybenzone is highly toxic to coral larvae. The results of their research quickly went viral, causing concern among places like Hawaii and the U.S. Virgin Islands where thousands of sunscreen-wearing swimmers, snorkelers, and SCUBA divers occupy the waters around coral reefs each year. In 2018, the Hawaii State Legislature passed a bill prohibiting the sale of oxybenzone-containing sunscreens. The following year, in 2019, Key West, Florida followed suit. Despite the public backlash, there is not a robust body of scientific evidence clearly demonstrating the effects of oxybenzone on coral health, with most decision-making based on this one study.

“The question at hand, really, was whether Bermuda should follow Hawaii’s lead,” Hochberg said. “Owing to its prominent role as a beach vacation destination, there was a reasonable expectation that Bermuda’s waters would contain oxybenzone, but it was unknown whether these amounts would negatively impact Bermuda’s corals.”

Hochberg assembled a diverse team of researchers and students to carry out the investigation, which lasted from August 2018 through October of 2019. He was joined by BIOS scientists Tim Noyes, Stacy Peltier, and Yvonne Sawall, as well as Sophie Ferguson and Allison Doolittle, both interns at BIOS with the National Science Foundation Research Experiences for Undergraduates (REU) program, and Jonathan Teague, a summer intern supported by the U.K. Associates of BIOS.

“The original study focused its efforts on coral larvae and bundles of cells exposed to fairly high concentrations in tiny laboratory test tubes,” Hochberg said. “That’s quite different from natural conditions, such as ocean currents.” To address these limitations, he designed a series of experiments using coral colonies and flumes—large, flow-through tanks designed to allow for the movement of water across the corals, similar to what they experience in nature.

The first phase of the investigation involved sampling water at various locations around the island to measure oxybenzone concentrations. During August 2018, the team visited three locations a total of four times each: Hog Breaker Reef, located off Bermuda’s north shore, which served as a control site due to its lack of human visitors, and two popular tourist areas—Snorkel Park in Dockyard and Horseshoe Bay Beach. As predicted, Hog Breaker Reef showed the lowest concentrations of oxybenzone, while Snorkel Park and Horseshoe Bay Beach exhibited higher concentrations. However, of the 16 samples taken, only one fell within the limits determined in the 2015 study to be lethal to corals: a sample at Horseshoe Bay Beach taken on a day with over 1,000 people on the beach at the time of sampling.

The second phase of the study utilized controlled experiments on living corals to determine whether the corals were absorbing (actively taking up) the oxybenzone, and the effects of the chemical on coral physiology. The five most common Bermuda coral species were selected as model organisms and collected from the Sea Venture Shoals region on the east end of the island, which is well-removed from popular tourist areas, to minimize the likelihood of prior exposure to oxybenzone.

To study uptake, the collected corals were divided into two groups, experimental (live corals) and control (dead corals), and placed in the flumes. The team dosed both groups with moderate levels of oxybenzone and collected water samples over the ensuing 10 hours to measure the rate that oxybenzone disappeared from the water. By comparing the experimental and control groups, they found that live corals do not uptake oxybenzone any faster than dead coral skeletons.

To investigate the effects on coral physiology, corals were again divided into experimental and control groups—both with live corals—and placed in the flumes for two study periods, one in September 2019 and one in October 2019. For a period of 12 consecutive days, the experimental groups were dosed with low levels of oxybenzone. Working together, the team collected a variety of measurements to evaluate the physiological conditions of the coral colonies. At the end of the experimental period, their results showed no differences in coral health between the experimental and control groups, suggesting that long-term, low-level exposure to oxybenzone does not negatively impact coral health.

Hochberg submitted the results of these investigations to the Bermuda Government in December 2019 and is currently preparing a manuscript for submission to a peer-reviewed scientific journal. The study highlights that not all environmental interactions are necessarily harmful to corals. “Ultimately, this is important for resource management, which can incorporate our findings to better direct conservation efforts,” Hochberg said.