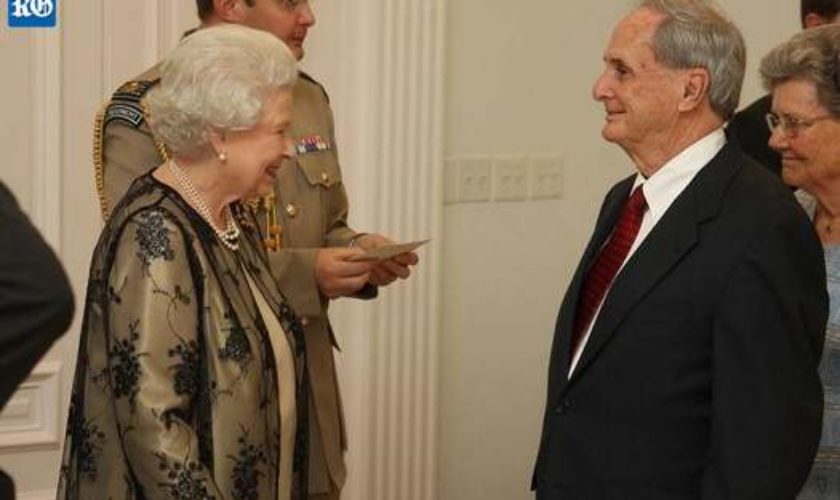 Walwyn Hughes is known to Bermudians for his public service: he served as Director of Agriculture before becoming the Permanent Secretary of the Ministry of the Environment and then the Ministry of Finance. Then in 1996 came his Senate appointment (the upper House of Bermuda’s Legislature) until his retirement in 2011. Throughout all of this, he remained a steadfast member of the BIOS board—the longest-serving member, in fact, in the history of the Institute. With a doctorate in entomology, he said he’s grateful that his service at BIOS has allowed him to stay intimately involved in science. This spring, Hughes, now 84 years old, reflected on nearly five decades on the BIOS board —and explained why fellow board members tease him about chickens.

His route to the BIOS board: When I was a boy, the Biological Station (as BIOS was then known) was always a bit of a mystery. It was simply that big building across Ferry Reach. Nobody knew much about what went on there, but I knew that they did science, which was, and remains today, of real interest to me. When I was a teen in the 1940s, insect pests devastated the island’s cedar trees. I worked in a lab helping to combat these pests and came under the influence of entomologists there. I then studied entomology at Cornell University as a way to have a career with local relevance. When I graduated, I was made assistant director of Bermuda’s Department of Agriculture in 1956, then director in 1975. I kept up my interest in science vicariously through my relationships at BIOS.  In the 1960s I got to know Bill Sutcliffe, who was the Institute’s director at the time. He encouraged the board to take me on as a trustee.

A family history on the island: My parents moved to Bermuda from Wales in 1928. My father responded to newspaper ad for a civil engineer. Prior to this move, my parents never had been more than 50 miles from their home in Wales, but they moved to this island and stayed. After my mother died when I was 6, my father supported us through his engineering work, as well as by raising and selling chicken eggs, meat, and dairy products. I adored animals and considered a life of farming; at school I wasn’t much of a student. I had a reputation for being absent often. I recall that I preferred being on our little farm, with the chickens and other animals, than in the classroom. My children found one of my school report cards once, and it said ‘Walwyn would be a good student if he was actually in school on a regular basis’.”

Favorite board memories: I’ve enjoyed seeing and being a part of (BIOS) as it has evolved and taken on some major projects, such as the comprehensive, two-year Bermuda inshore waters study. As a natural scientist, I liked being able to support those studying our local environment, both marine and terrestrial. I’ve enjoyed seeing how the facilities BIOS has offered have changed. We used to have these primitive little labs. Now what we offer is so much more sophisticated.

Proud moments: I think it helps that I have knowledge of how the Bermuda government works, and of the island’s policies, and I provide institutional memory that I hope is useful. I like to think that I have helped Bermudians understand the work carried out by BIOS and why it is so important, locally and globally. I am proud, and grateful, too, to have been a part of such an intellectually stimulating Board and institution.

What others say about Hughes’ contributions to BIOS:

“He brings a unique and valuable voice.” (Betsey Hughes, Walwyn’s wife) When he began his board service years ago, Walwyn found an outlet to make many lasting friendships, and to vicariously participate in the science. I think he has always felt that being a Bermudian on the board has been of assistance. He has connections here in the government and community.  There have been many times when someone has rung asking for his advice and attention on a problem facing the staff and or BIOS board.

“He’s known for his enthusiasm, good humor, and love of chickens.” (John Farrington, BIOS trustee) Walwyn brings special enthusiasm for BIOS and wisdom when there are challenges. He is always a wonderful sport about humor, which contributes to camaraderie of the board. Years ago, Jim Galloway (fellow trustee) and I learned that Walwyn was interested in chickens. We decided to send him a stuffed rooster that would crow when someone clapped. Walwyn was delighted with the gift, but his wife Betsey politely noted the racket it made. Thus, we switched to a rooster-shaped wine flagon that we located in a San Francisco shop during an American Geophysical Union meeting. During the next BIOS Trustees’ meeting it appeared during coffee break at Walwyn’s place at the table.

“He uses his intelligence to collaborate in a positive way.” (James Galloway, BIOS trustee)
I met Walwyn in the 1980s. He immediately struck me as a person who cares about others and deeply about this Institute. BIOS has had several rough spots, and throughout those periods he has been the voice of reason, with a great analytical and rational mind. His philosophy has always been to think about what makes sense for the people involved.